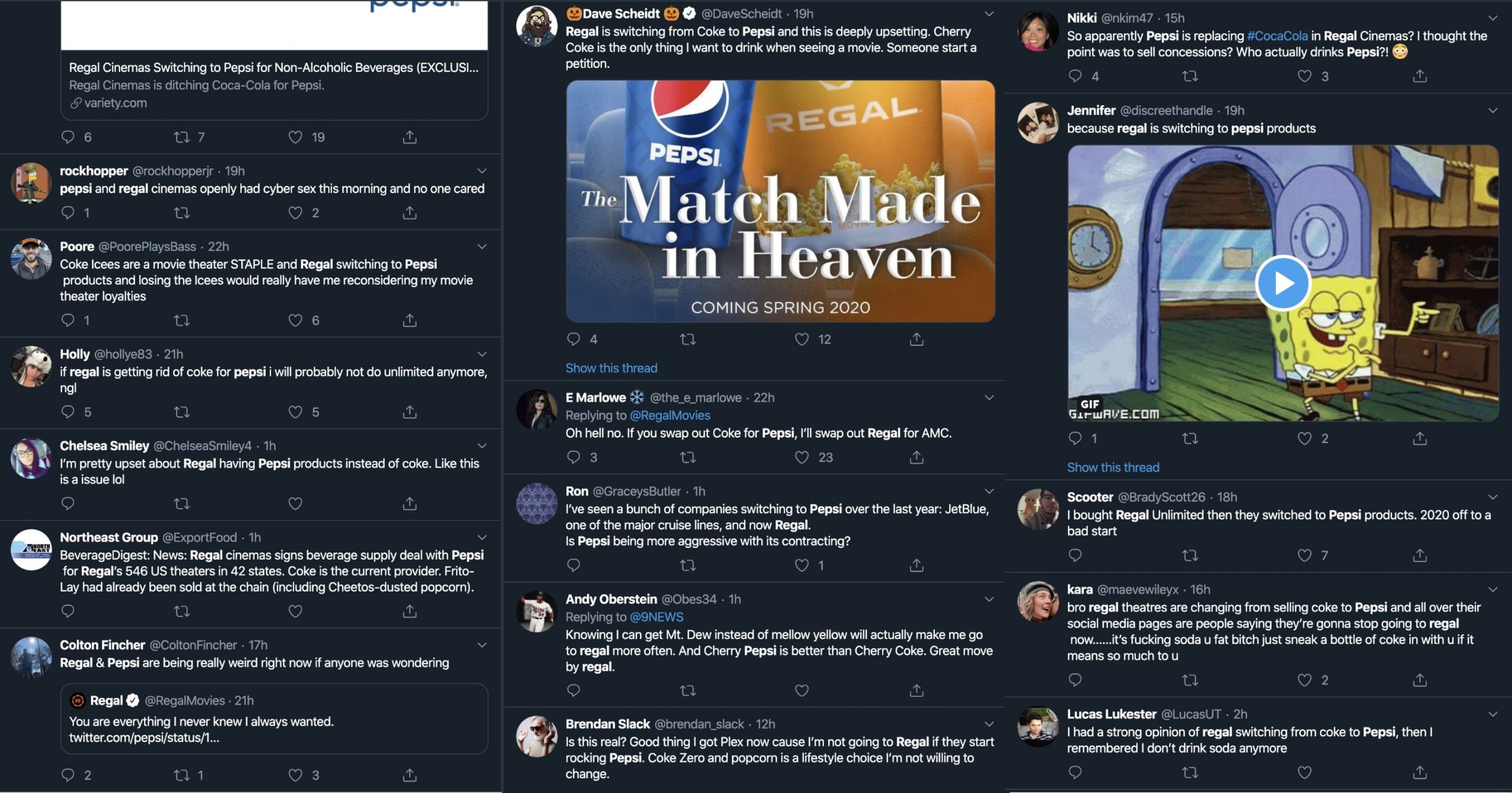 The announcement that Regal Cinemas is switching from Coke to Pepsi has not gone down well with most people on social media. The announcement came after a flirty Twitter campaign between the official @RegalMovies and @Pepsi accounts, proclaiming their mutual attraction. But it was Variety’s Brent Lang that broke the news formally with an exclusive.

As was to be expected, the Regal executive quoted was putting a positive spin on the announcement.

“This is something where the stars aligned,” said John Curry, senior VP of foodservice for Regal. “Pepsi and Regal just share a mutual passion and excitement for the moviegoing experience.”

Regal had also already been selling PepsiCo’s Frito Lay snacks at its locations. As part of the deal Pepsi will also become the ‘exclusive sponsor’ of Regal’s 4DX auditoriums and “Pepsi and Regal are also looking for opportunities to work together on augmented reality offerings, a space the chain has begun exploring.”

However, the second-to-last paragraph of the Variety piece acknowledges that Regal’s parent company Cineworld had earlier made the switch from Coca-Cola to Pepsi for all of its locations in Eastern Europe and subsequently also the United Kingdom. As such it was only a matter of time until Regal would switch as well and the local management would never have had any say in the matter.

Regal users, on the other hand, have been quick to give their say on social media, with the negative comments outweighing the positive or neutral one by a factor of two or even three to one (in our un-scientific estimate).

Some people took it very badly:

this is the worst day of my life https://t.co/z5gYcqkNjU

Some people vowed to take immediate action of cancelling their Regal Unlimited memberships.

Sadly I’ll be canceling my Regal Unlimited. Part of the movie theater experience is a Coke!

Regal Cinemas is switching from Coke to Pepsi and I might have to cancel my Regal Unlimited subscription and go back to AMC Theatres.

Other people woved to make their own switch:

Oh hell no. If you swap out Coke for Pepsi, I’ll swap out Regal for AMC.

Some people’s response was more measured:

Personally I like Pepsi, but this is a huge step down for Regal. Sometimes I could justify spending 6 dollars on a coke at the movies, for sure can’t do that with Pepsi

Some people were positive about the switch:

Knowing I can get Mt. Dew instead of mellow yellow will actually make me go to regal more often. And Cherry Pepsi is better than Cherry Coke. Great move by regal.

A few went all-out tribal, perhaps a foretaste of the 2020 Presidential election:

I hope this is what it sounds like! There may not be any Regal theaters near here, but a win for @pepsi is a win for me! They need to serve Pepsi literally everywhere like at @HolidayWorld so we never have to deal with a sub-par soda again! #pepsination #pepsiforever

Other people played it as cool as an ice cold….erhm…Dr Pepper:

I had a strong opinion of regal switching from coke to Pepsi, then I remembered I don’t drink soda anymore

The announcement provoked a lot of gifs, emojis, memes and general humour:

Concessioner: "We don't have Coke -is Pepsi okay?"
Me: "Is Monopoly money okay?"

And what will happen to those Coca-Cola sponsored student short films?

We're going to have to make all new Regal short films with pepsi cups now https://t.co/UG6XGtZCP5

Some people said they would switch to Plex [illegal streaming – but we won’t name-and-shame them], while others encouraged smuggling your favourite soda into Regal:

At the time of writing President Trump had not yet weighed in on this matter, possibly being distracted by Iran and the imminent Impeachment trial. But we continue to monitor Twitter in case any hostilities are directed at either party from the White House. POTUS has not been known to hold back his opinions about sodas:

I have never seen a thin person drinking Diet Coke.

With Cineworld in the process of acquiring Cineplex, it will only be a matter of time before the switch is made from Pepsi to Coke north of the border as well. So watch out for how the famously polite Canadians react when their Cokes are taken away from their largest cinema chains. We fear it will not make Canucks happy. 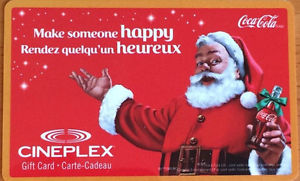