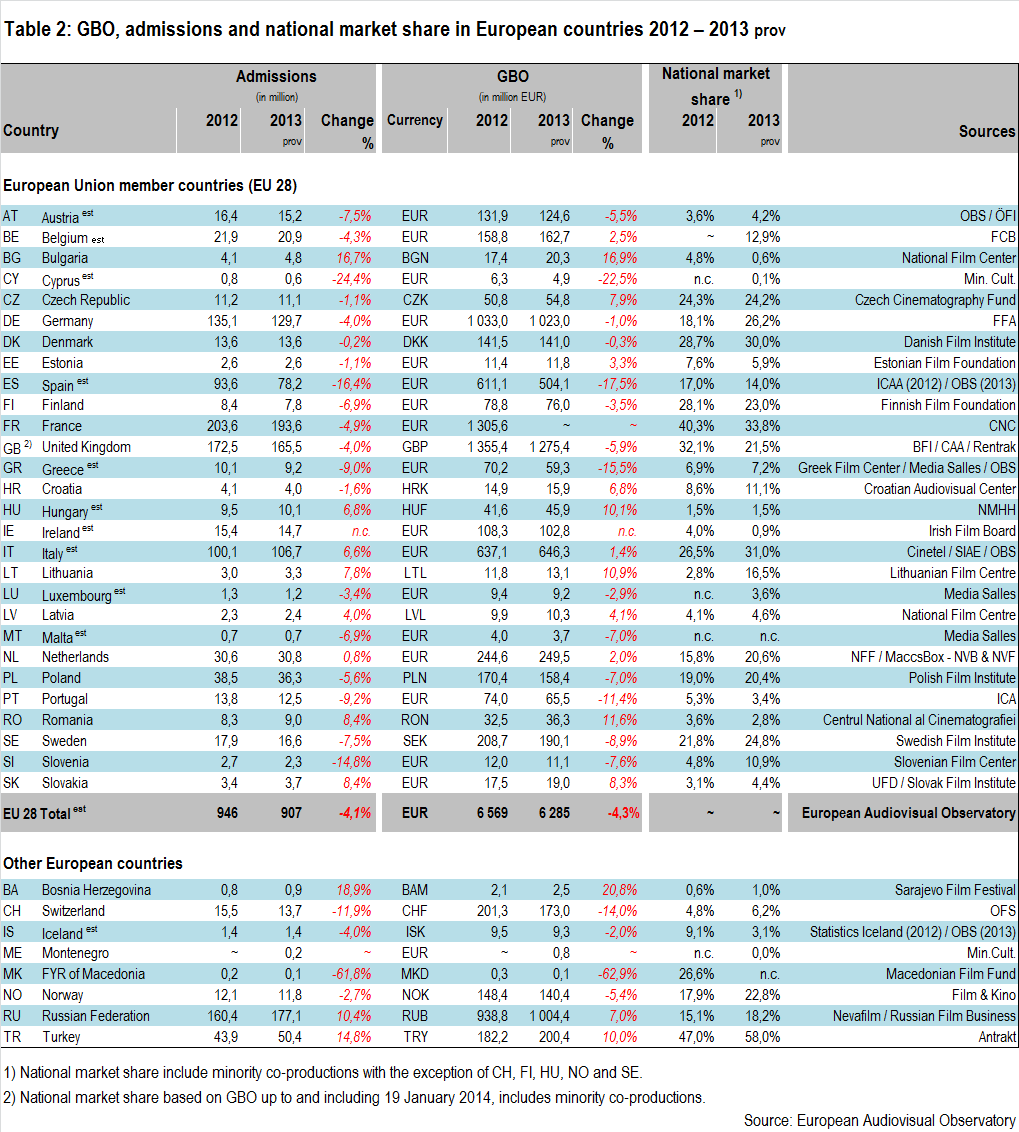 The European Audiovisual Observatory (EAO) has released its statistics on European cinema admissions in 2013 ahead of the Cannes Film Festival and they make for grim reading. We have already written about the preliminary figures (Europe’s Cinema Attendance Decline is Greatly Exaggerated), so we will not cover old ground.

It is worth, however, briefly recapping some of the key analysis that still hold true for this data:

So what is new about this data and what more can it teach us?

EAO makes much of the fact that Q1 of 2014 is an improvement on the first quarter of the year before.

Provisional Q1 figures from 11 EU markets indicate that admissions in the European Union increased in the first three months of this year, compared to Q1 2013. Quarterly admissions increased significantly in 3 out of the 5 big EU markets, namely in France (+18.9%), Italy (+13%) and Spain (+8.7%), outweighing smaller decreases in Germany and the UK. On a cumulative basis admissions in these five markets increased by 5.6%. As these markets represent around 75% of total EU admissions, it can be assumed that total EU admissions increased in the first quarter. This would also be backed up by data from six additional EU Member States which registered a growth in cinema attendance, including the Netherlands (+4.8%), Sweden (+17.9%), Greece (+8.9%) or Slowakia (+49.5%).

This is true but also largely irrelevant. Coming off a disastrous 2013, it would be shocking if this quarter saw even more steep decline. Oscar-contending films and The Lego Movie attracted customers but tell us nothing about the year as a whole will be an improvement on 2013 or not.

What it tells us that France and Italy had some notable local comedies do well, while Germany and Italy did not have a local film (Like Skyfall or Slumdog) to raise admissions. Don’t forget that UK exhibitors like Cineworld still had a good first quarter, despite the poor UK box office, but mainly because they managed to improve sales of concessions and the like. 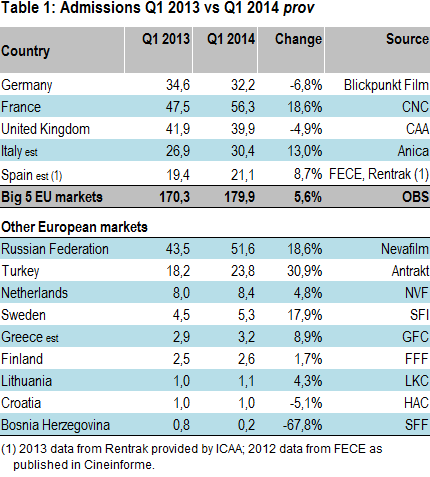 What is more interesting is that Western Europe is now a largely homogenous market when it comes to Hollywood blockbusters. These are all largely released at the same time and fare equally well across these territories.

So what raises or sinks the box office in a particular country is the level of success of local hits, which with the exception of “UK” films like Harry Potter (distributed by Warner Bros), do not translate into any significant box office in neighbouring territories. This is particularly true of French/Spanish/German/Italian comedy, which tends to produce the biggest local hits.

This was not always the case. Summer blockbusters from Hollywood would sometimes only be released months later, largely because US distributors lacked faith that summer holiday was a good time to lure Spaniards et al into cinemas. Internet piracy has forced them to ditch such doubts.

What could make it a poor second and third cinema quarter in 2014 is the World Cup, which will do more damage to the box office takings of Hollywood blockbusters than sunny weather. This is particularly true in four of the six biggest European cinema markets that have football teams that tend to do well and play on until the semi-final: Germany, France, Italy and Spain (but not UK and Russia). Expect releases to be shifted back to later in the summer there somewhat.

A Further Failure of European Films

Next come two pieces of statistics on European films, which do not add up to good news. Though that’s not how they are told by the EAO.

EU production levels continued to grow, albeit in a moderate manner, to an estimated 1 546 feature films in 2013, 18 films more than in 2012. This represents yet another record high and breaks down into an estimated 1 075 feature fiction films and 471 feature documentaries. Fiction films therefore accounted for about 70% of total film output. Growth was however driven primarily by an increasing number in feature documentaries, up 15 films, as the production of EU fiction films has remained stable?

Based on provisional figures, estimated market share for European films in the EU dropped from 28.9% to 26.2% in 2013. This figure excludes European films produced in Europe with incoming US investment, which – in the absence of runaway successes like Skyfall or the Harry Potter franchise – registered their weakest market share in recent history taking just over 1% of total admissions. Market share for US films on the other hand increased from 62.8% to an estimated 69.1%, the highest market share in the past ten years.

Put these two together and you realise that European countries are making more films than ever, while European audiences are watching fewer European films than ever. So a lot of films get made, often with heavy subsidies and support (though Hollywood too gets tax cuts), that people don’t go to see. In this regard it is wrong to talk about a ‘European’ because this is really a federation of French, Germany, Spanish, Austrian, etc. problems (remember, Italy was an exception on the strength of one film: Sole a Catinelle).

So a topic of conversation at Cannes should be: why are we making all these films that people are not watching in the cinema? This is not necessarily a sign of the strength of Hollywood films (who lost market share in countries like China in 2013) but a weakness of European films. So don’t pray for Godzilla to be a blockbuster to save the European box office, pray for German, French, Italian and Spanish comedies.

The French can console themselves that the most successful film of 2013 was Despicable Me 2, which while funded and distributed by Universal, was created out of an animation studio in Paris’ 15th arrondissement.

Digital All But Done

The other new piece of interesting news is that the switch to digital is all-but-done, with 87% of cinemas in Europe now using digital equipment.

According to figures provided by MEDIA Salles a total of 4 390 screens were converted to digital projection systems in 2013, bringing the total to 26 035 digital screens. This means that by the end of 2013 about 87% of the EU’s total screen base has been digitised. A total of ten EU Member States including France, the UK, the Netherlands, Belgium, Finland or Denmark have converted practically all their screens. Digital screen penetration in Germany reached 90% compared to 75% in Italy and 70% in Spain. Only seven Member States registered digital screen penetration rates below 70%, including the Czech Republic (51%), Slovenia (45%) and Greece (27%).

The interesting question in Cannes (and in June at Cine Europe) is what is to be done about the laggards, both in terms of countries and single-screens.

Yet the single biggest issue is the long term secular (i.e. non-cyclical) decline of cinema audiences in western Europe. While box office has been kept artificially inflated by 3D and above-inflation price-rises, there is no getting away from the fact that each year fewer and fewer people in countries such as France, Germany and UK bother to go to the cinema. Last year box office caught up and started to shrinking.

The growth in Central Europe, Eastern Europe, Russia and Turkey will off-set that a little, but cannot improve it enough for Europe as a whole. EAO acknowledges this fact, without editorialising.

While the novelty factor of digital 3D blockbusters initially boosted underlying cinema attendance to 982 million in 2009, admissions have been decreasing more or less continuously since then. First they dropped to around 965 million in 2010 and 2011 before falling in a more pronounced manner to 945 million in 2012 and ultimately 907.1 million in 2013, the lowest level since 2005.

So while the year-on-year decrease in attendance for 2013 was exaggerated and a partial reading of data, the long term trend for western Europe is very real and getting worse. There thus needs to be an urgent discussion about how to win cinema audiences back. The easiest way is to make fewer but better local films. The kind of films that typically do not get to compete or win awards in Cannes. But no one is going to get applause by standing up in Cannes and telling filmmakers that they make too many bad film. Least of all the EAO – but that is what their data tells us.