While the US grapple with a poor summer box office (BO) most of western Europe seems to have accepted that as a mature cinema market, its countries will see stasis or gradual stagnation only interrupted by the occasional outsize local hit (Italy last year, Ireland this summer). German epitomises this trend, with the recent study of cinema attendance 2009-2013 showing an overall slow decline.

But one European country has challenged the notion that secular decline in the cinema sector is a structural inevitability of changing demographics, technological and economical trends – and it appears to have reversed that decline. Not surprisingly, perhaps, the country in question is France.

France is the only country in the world to take cinema seriously enough to consider the declining cinema attendance a national emergency. Having launched several public initiatives to counter it, the good news is that early indications are that the decline can not just be halted but reversed.

Focus on the Next Generation of Cinema Goers

We have reported earlier on preliminary findings, but these have now been confirmed by the the Centre National du Cinéma (the National Cinema Centre – CNC) in a major report.

On 1 January 2014 French exhibitors introduced a scheme whereby children under the age of 14 would only pay four euro (€4 – USD $5.25) for cinema tickets for every screening of every film for every day. This was a joint public-private effort with the French government doing its part, as noted in an article published a month before the scheme was launched.

This operation, “launching in 2014 but which is intended to continue beyond”, is in the context of the government’s decision to lower on January 1st the VAT on cinema admissions of 7.5% to 5% said Marc-Olivier Sebbag, General Manager of the FNCF (National Federation of French Cinemas).

The VAT reduction desired by the government, is being voted on by MPs. The Minister of Culture Aurélie Filippetti welcomed the “democratization initiative taken by members of the FNCF.”

There was some opposition from distributors at the time – I can’t imagine Disney in particular being thrilled about this – but with buy-in from all cinemas, as well as the Ministry of Culture, there was no way that Hollywood studios would be permitted to obstruct this initiative. 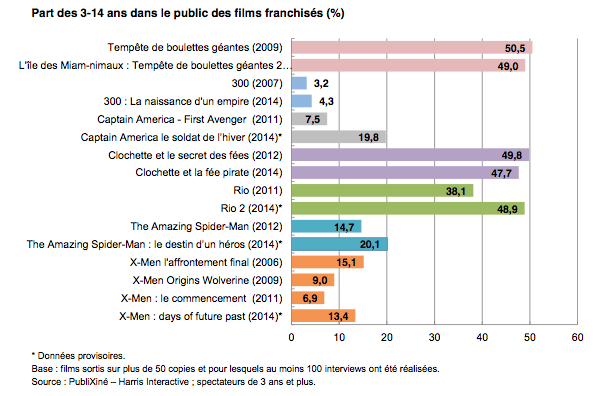 The FNCF was clear that the goal was to reverse the declining attendance, though they were prepared to re-appraise the terms and methods, based on how it played out.

For the federation, the goal is, “in a context of declining attendance,” to encourage young people to come “more easily and more frequently to the movies” and build audiences for the future. “This is a population that goes to the movies as a family, we therefore address the more general family audience,” said Marc-Olivier Sebbag.

“We will take stock at the end of the first year and we will see whether it should be adjusted, for example by changing the age or price,” said he said.

With under-14 accounting for eight to nine percent (8%-9%) of total admissions, or 16 million out of 200 million, this was a significant step as average ticket prices for this age group was €5.50, compared to the average cinema ticket price in France of €6.42.

The Gamble Pays Of (Says CNC) 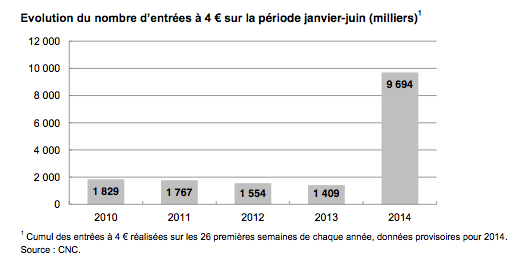 The report is worth downloading and reading in full (PDF link).

While it could be argued that six months is too soon to evaluate the longer term impact of such a move, it shows that the CNC and the industry are committed to putting hard numbers on the evolving evaluation, as well as taking a long term perspective, with data stretching back to the early 1990s.

So far the numbers seem to be validating the proponents of the initiative. In the article ‘Un franc succès pour l’opération cinéma à 4 euros pour les jeunes‘ (‘A success for the operation 4 euros cinema for youth’ – but with a wordplay on franc) it is noted:

In the first six months of the year, attendance was up 11.4%, an increase due both to a “particularly attractive film offering, especially French [films]” and the 4 euros offer for youth, stresses the body [CNC].

The 4 euro operation has “therefore” reduced average revenue per paid admission (-0.8% to 6.26 euros), the study says.

Between January and June, however, the admissions at 9 euros and above have increased by 20.7%, a figure which again explains the success of the operation at € 4, children under 14 years being “more often” accompanied by the one or more adults paying the full price cinema ticket. Nearly 35% of parents (age 35-49) accompany their children to the movies.  LINK 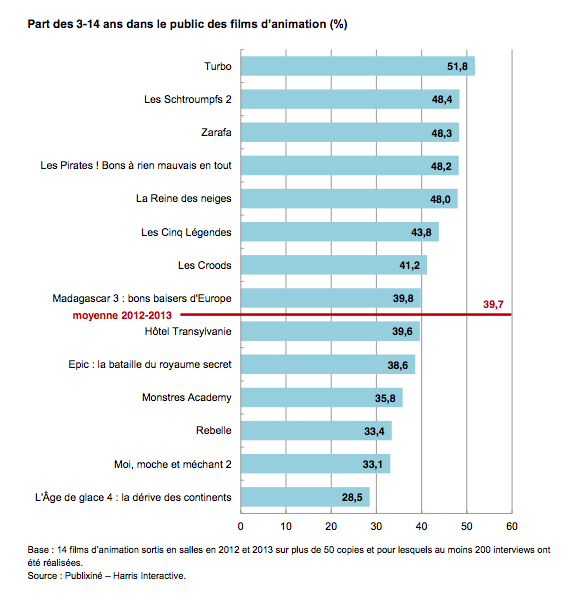 This fact is reflected in the average ticket price for the period, which increased slightly.

“The recipe HT divide between exhibitors and distributors based on the rate of film rental increases of 4 cents per entry between 2013 and 2014”, ie € 4.56 million in total, a trend reflecting lower VAT rate on January 1 of 7% to 5.50%.

Needless to say the scheme has been popular with cinema going population, with just over half of those surveyed aware of it. An overwhelming majority (91%) believe the rates to be ‘attractive’, while almost as many feel that it should be made permanent (90.6%).

Lessons For Other Countries?

It is important to remember that the scheme has only been running for six months, which also coincided with a streak of successful French films, with the top three films for the year-to-date all domestic productions (followed by four Fox films!) according to Box Office Mojo:

So any lasting conclusions will have to wait at least until the end of 2014. It should also be remembered that this is not the only initiative or the end of the French efforts. As we quoted from an article in Les Echo back in June, there is a wider education effort needed.

More fundamentally, the education aspect of cinema is subject to multiple touches. A report commissioned by the CNC has been finalized. Directed by Xavier Lardoux, Deputy Director General of Unifrance (Support Association of French cinema export), he advocates through 10 measures, the establishment of a genuine European policy for film education.

The author of the report considers educating young audiences about the 7 th art to be both a political and an economic necessity. “When we see a French child spends more time in front of a screen, whatever it is, at school, and that children are facing more and more young people in these screens, learning how to watch should be taught earlier. As for the economic aspect, it is about creating the spectators of tomorrow for European cinema, which is a major industry,” Xavier Lardoux said.

France is also cracking down of online film piracy/theft (with its Three Strikes law) as well as looking at taxing smartphones, tablets, Amazon and Netflix, even resisting liberalising release windows for Premium VoD windows more than slightly. Both the French and government is continuously evolving its film/cinema policy and evaluating its impact, all against the backdrop of impending austerity measures that the Hollande is having problems pushing through.

It would thus be wrong to prescribe a €4/$5 under-14 cinema ticket panacea for cinema attendance decline in western Europe to all other countries. But it is something that others would do well to study and follow, before deciding whether to emulate it themselves. 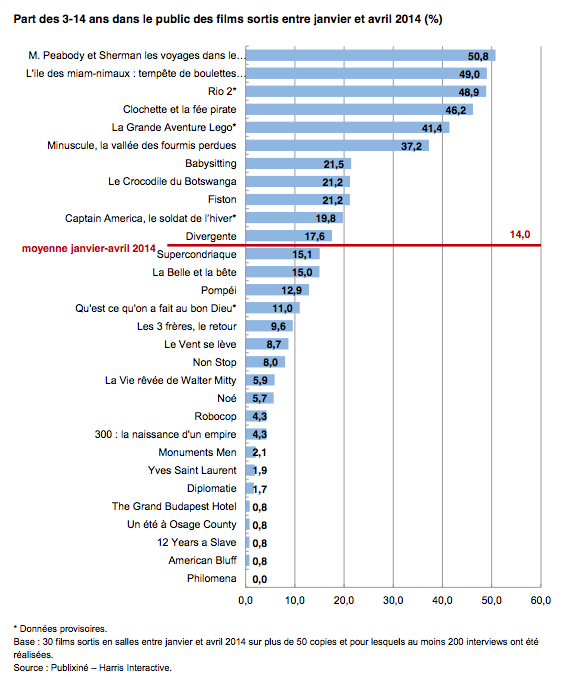 (P.S. Who are the 0.8% cinema audience of 3-14 year olds who went to see 12 Years A Slave in France? Must be either very mature or their parents couldn’t get a baby sitter.)