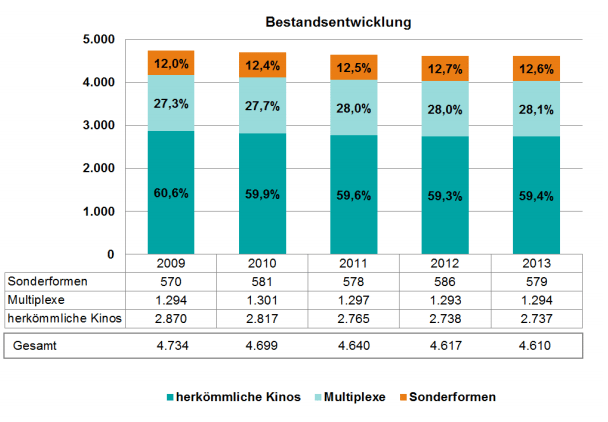 The German Federal Film Board (FFA) has just published a detailed study (pdf) of cinema screen trends over the last five years, with some surprising findings. As a mature exhibition market, multiplex numbers are static, but there is significant growth of outdoor and specialist screens.

The number of multiplex screens in 2013 was exactly the same as in 2009: 1,294, though peaking at 1,301 in 2010. There were more than twice as many non-multiplex/traditional screens, though these declined from 2,870 in 2009 to 2,737 in 2013 in a trend that is likely to continue and contributed to decline of total screens, though at just -0.2% in the most recent year (equivalent to seven screens), less pronounced than past years.

Though the report does not mention it, it is important to remember that these were the key years for digital cinema implementation in Germany. However, the full digital death toll is likely to only come in the statistics for 2014 when the termination of 35mm print distribution is likely to see a significant drop in the numbers of ‘traditional screens’.

What is most interesting to note is the growth of specialised screens, which increased from 570 in 2009 to 586 in 2012, before settling at 579 for the last year of the report. These include Community/Culture centre cinemas (162), Associations (136) and University cinemas (126), with other types of cinemas as well, most of which did not screen film on anything more than a weekly basis. 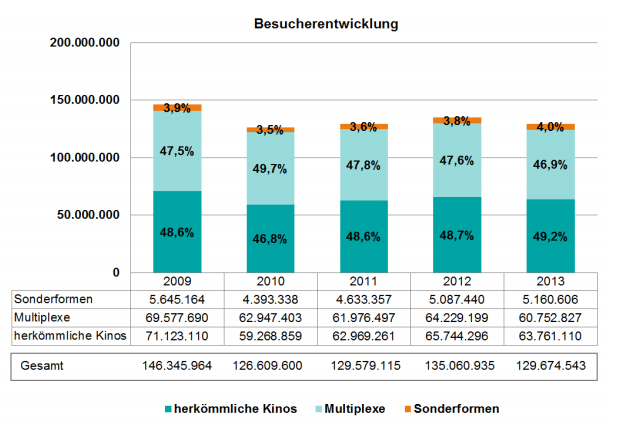 Specialist screens were the only form that grew in the most recent year, now accounting for four per cent of total ticket sales. As the report notes:

The development in the last five years and has been marked by several small direction shifts. The attendance development of specialist screens follows a similar cycle. Over the whole observation period from 2009 to 2013 the university and association cinemas have grown by 17 per cent in terms of attendance. Open-air and community/culture have the strongest attendance figures. The overall winner was drive-in cinemas (+9.7%, even though its total screen numbers declined), university cinemas (14.9%) snf open-air cinemas (+15.4%).

Despite falling attendance, total box office has held over one billion euros for the two most recent years on account of rising ticket prices. Here, perhaps not surprisingly, multiplexes take in the majority of revenue, though it is still only just over half at 50.6%. It should also be noted that this proportion has been shrinking and is the lowest for any of the past five years of the report.University cinemas have been the biggest beneficiary of this trend, with a growth of 21.5% in box office above that of attendance. 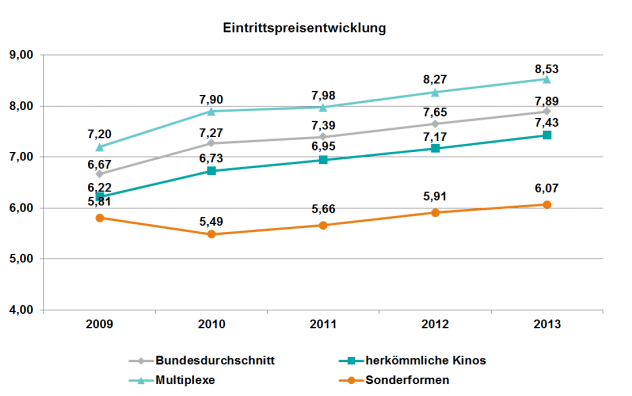 Some other interesting findings from the wealth of data that is provided in the annex of the report:

– There are 32-33 mobile cinemas, a number that has held steady over the five years;

– While the number of university and association cinemas are approximately the same (rising from just over a hundred to around 130 in five years), the latter earns almost four times as much as the former on account of higher ticket prices;

– For outdoor cinemas the temporary screens outnumber fixed screens by a factor of 9:1 (461:53), which could reflect the success of German company Airscreen in its domestic market (seen below at a drive-in at the Volkswagen factory in Germany);

It will be interesting just how big a change will be recorded when statistics from this year are included and the full impact of digital is felt. But it is important to remember that while Germany does not make a big song and dance about it, there is a strong support on every level from the federal to the local for keeping cinemas alive. Not least the small village level where the mayor is often a prominent local business person whose family owns local real estate, which often includes a stake in or control of the cinema.

Germany remains a static but stable cinema market and one that is still worth a billion euros per year.