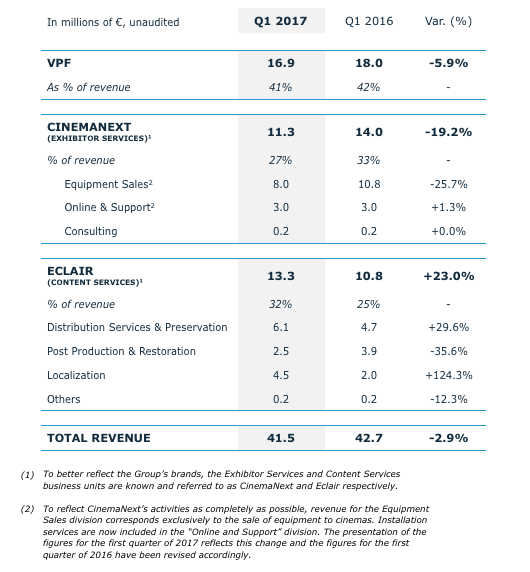 Ymagis Group, the European specialist in technologies for the film industry, today reported its consolidated financial results for the first quarter of 2017, ending 31 March 2017.

In a market where replacement sales have not yet significantly taken off and after a first quarter generally unrepresentative of annual business, revenue for Ymagis Group was down by 2.9% at 41.5 million Euros over the first three months of 2017, mainly due to the effect of a scheduled reduction in VPF business and a temporary fall in equipment sales.

CinemaNext revenue fell by 19.2% at 11.3 million Euros as compared to 14.0 million Euros during the first quarter of 2016. The business unit (BU) was penalized by a drop in equipment sales during this first quarter due to a slower-than-expected start to replacement sales and delays in some new cinema installation projects. Technical Services & Support and Consultancy activities were stable during the quarter. It should therefore be stressed that the drop-in revenue is attributed to business with a low gross margin.

Despite the market’s “wait-and-see” stance over the first three months of 2017, Group business picked up speed as of March for all services BUs.

For CinemaNext, sales of replacements gathered pace during March and the trend is confirmed with a number of discussions in progress. The Group expects the replacement market to accelerate over the second quarter of 2017. CinemaNext also kicked off the development of its business in the United States with the creation of CinemaNext North America during the first quarter. Business began well with the signature of maintenance contracts for 135 U.S. screens in its first month.

Several post-production contracts were signed by Eclair during the first quarter of 2017. Distribution and Versioning & Accessibility business is on the up and should drive revenue over the remainder of the year.

The Group is confident for the rest of the fiscal year and confirms its average annual growth targets of at least 10% by 2020 for its Services activities. The launch of the Group’s latest innovations (EclairColor, EclairPlay and Sphera) received an overwhelmingly positive response from professionals in the sector and should also drive the Group’s business during the coming months.

About Ymagis Group
Ymagis is a European leader in advanced digital technology services for the cinema industry. Founded in 2007, the Group is headquartered in Paris and has offices in 23 countries with close to 770 employees. Our core business is structured around three main units:  CinemaNext (exhibitor services: sales and field services, software solutions, customer service/NOC and consulting), Eclair (content services: post-production, theatrical delivery, digital distribution, versioning and accessibility, restoration and preservation) and Ymagis (financial services).