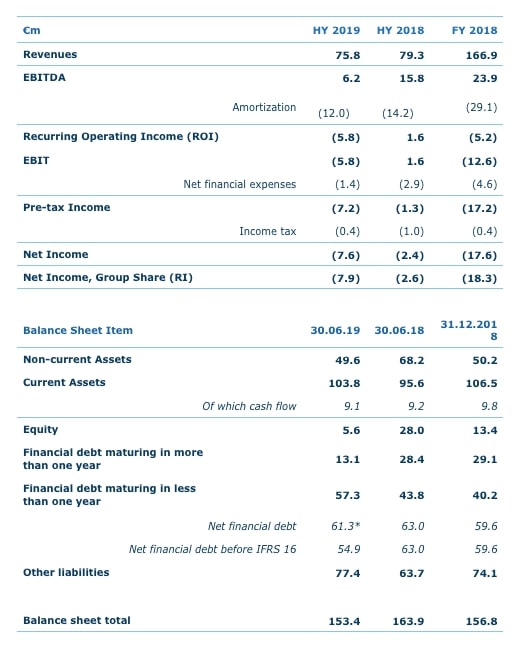 Ymagis Group, the European specialist in technologies for the cinema industry, today reported its first half-year earnings for 2019 ending 30 June 2019, audited and approved by its Board of Directors on 23 September 2019.

Standing at €75.8m, revenue for the first half of 2019 was down 4% as compared to the same period in 2018 due to the scheduled decline in VPF activity (-29% at €19m) and the narrowed post-production and restoration-related activities on the French market. However, activities, not including VPF revenue, are up 8% at €56.8m due not only to the solid growth of the CinemaNext business unit (+19% at €30.2m) but also to Eclair’s Versioning & Accessibility activities (+15% at €11.7m).

Revenues for the first half of 2019 show signs of improvement on a half-year basis compared to the second half of 2018. They remain down, however, marked by the restructuring of the Eclair business unit, launch costs of the Group’s new business activities and additional costs related to CinemaNext operations in 2018. Expenses related to the Group’s financial restructuring also had an impact on results.

CinemaNext, despite a significant increase in sales in the first half of the year (+19% to €30.2m), generated a negative EBITDA of -€2.4m compared to -€1.4m in the first half of 2018. This result includes among others a greater impact of headquarter fees, which include exceptional items and whose share allocated to CinemaNext is greater than it had been previously.

Eclair’s EBITDA was -€3.8m compared to -€2.7m in the prior year period and -€5.9m in the second half of 2018. This decrease is related to the implementation of the employment protection plan (PSE) for Eclair Cinema SAS, which oversees the company’s restoration activities in France, after it was placed in receivership and while it remained in the scope of consolidation.

Lastly, new activities contributed negatively to the Group’s EBITDA at -€3.1m, due to the launch costs of virtual reality activities and the shutdown of the EclairGame business. In addition, the ongoing discussions around the Group’s refinancing have resulted in a slower than expected roll-out of the new centres and consequently a longer period to reach breakeven.

Net financial results are down €1.4m, an improvement of 50% compared to the previous year. Interest on long-term financial debt (notably Oseo and EuroPP) accounts for the majority this sum, short-term financing of bank overdrafts and facilities solutions (factoring) for the balance.

Tax expenses amounted to -€0.4m compared to -€1.0m in the first half of 2018, mainly due to the lower results VPF revenue from the Group’s international subsidiaries.

Despite a decline in operating cash flow, the Group managed to maintain a positive free cash flow, thanks to the improvement of the WCR as a result of ongoing in-depth work on the Group’s accounts receivable.

Net financial debt, excluding the impact of IFRS 16, was reduced by €8.1m.

Ymagis reiterates its confidence in the progress of its various business units:

2) Eclair’s situation is gradually improving, notably with the sale of the Eclair Cinema subsidiary, subject to approval by the Commercial Court of Nanterre. In addition to this divestment project, the group is preparing to conduct a major restructuring of the Eclair business unit to create four independent entities that would each have their autonomy:

– A profitable and growing company dedicated to preservation services on the French market, generating revenue of approximately €2m, based on Eclair’s physical stocks and new digital preservation needs;

– A company dedicated to Versioning and Accessibility services, with revenue of about €22m in steady and profitable growth, and 3 major European centers;

– A company, comprising the Eclair Logistics company, dedicated to theatrical delivery services in Europe and the Americas with annual revenues, in slight growth, of about €20m, which should be profitable from 2019 after several difficult years due to the transition to dematerialization;

– A digital services company for right-holders, focused on the French market, with annual sales of around €5m, which should reach profitability in 2020.

The goal of this restructuring, which will come into play only after consultation with the employee representative bodies, is to simplify and lighten the operation of the activities to allow them to be profitable in the short term and to implement partnerships or reconciliations.

3) The Group’s VR activities are developing with the opening of new centres in Marseille in October 2019 and in Athens in the coming weeks in association with a local cinema operator. However, this growth is expected to remain moderate due to the temporary slowdown in investment in the Illucity project in the context of negotiations with the Group’s creditors.

In this context, Ymagis hopes that the renegotiation of its debt will allow it to capitalize on the efforts made to take advantage of these new growth and profitability levers. The ongoing discussions, if successful, should allow the Group to enter a new stage of its development.