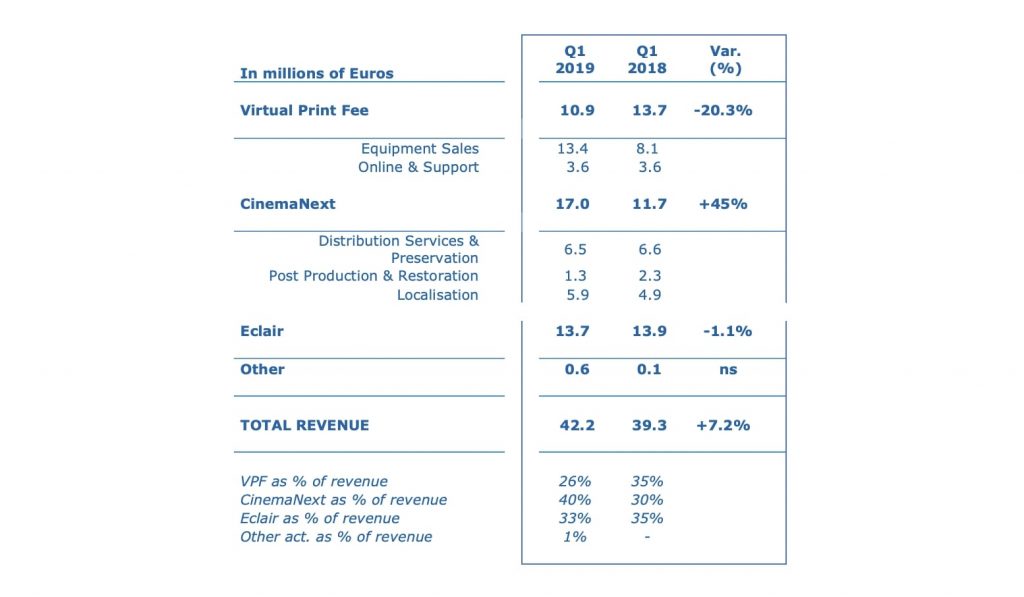 Revenue for Q1 up by 7.2% at €42.2m driven by strong growth in the CinemaNext BU offsetting the scheduled reduction in VPF revenue

Ymagis Group, the European specialist in digital technologies for the cinema industry, today reported its consolidated financial results for the first quarter of 2019.

Ymagis Group’s revenue increased by 7.2% in Q1 2019 in relation to Q1 2018 following four consecutive quarters in decline. Thanks to robust equipment sales and its geographical expansion, CinemaNext recorded a 45% increase in revenue at €17.0m, which more than offset the scheduled reduction in the VPF BU (-20.3% at €10.9m). Eclair’s revenue was stable (-1.1% at €13.7m), with the decline in revenue for its Eclair Cinema subsidiary, currently in receivership, being offset by the growth in versioning & accessibility activities. Ymagis Group’s new activities have begun to grow, generating revenue of €0.6m, mainly driven by Illucity.

CinemaNext sales recorded strong growth of 45% during Q1, generating €17.0m. This was driven by equipment sales and sustained significant services activities (online and maintenance). Although this increase is primarily due to new cinema equipment projects, the market is starting to see the emergence of demand for the renewal of projection systems.

Moreover, CinemaNext benefited from a buoyant market in several regions such as the United Kingdom, Eastern Europe, and the Middle East with a first agreement signed in Q1. CinemaNext revenue incorporated €0.7m generated by the recently acquired TLS subsidiary (Technical Lamp Supplies Ltd.), the consolidation of which started on 1 January 2019.

Eclair experienced contrasting developments with a decline in its creative services activities linked to the placement of French subsidiary Eclair Cinema in receivership. This was largely offset by the versioning & accessibility activities (+20% at €5.9m), which enjoyed continued growth thanks to the synergies between Eclair’s production units in Spain, France and Germany.

The new activities (mainly Illucity) recorded revenue of €0.6m over the quarter, the same amount it reported for the 2018 fiscal year. The VR activity, marked by the launch of the first Illucity adventure park in Paris mid-December, has now entered a growth phase, with revenue of close to €0.4m during Q1.

Business development outlooks remain subject to renegotiation of the debt

Ymagis Group’s services activities began a promising upward curve in Q1 with the confirmation of the start of a new growth phase for CinemaNext, the excellent performance of Eclair’s versioning & accessibility activities, and the potential of the Group’s new virtual reality activities demonstrated in its promising first results.

The need for cinemas to renew their first-generation digital projection equipment, installed between 2008 and 2013, should prove a powerful driver for organic growth for CinemaNext over the coming years. The development and commercialisation of new offers such as the Sphera premium cinema concept or virtual reality installations adapted to the needs of cinemas will also contribute to increasing revenue.

The renegotiation of the debt, for which a standstill agreement with its creditors was extended until 31 July, should enable Ymagis Group to capitalise on the efforts made to take advantage of these new growth and profitability drivers. Subject to a positive outcome, the discussions underway should enable the Group to enter a new stage in its development.