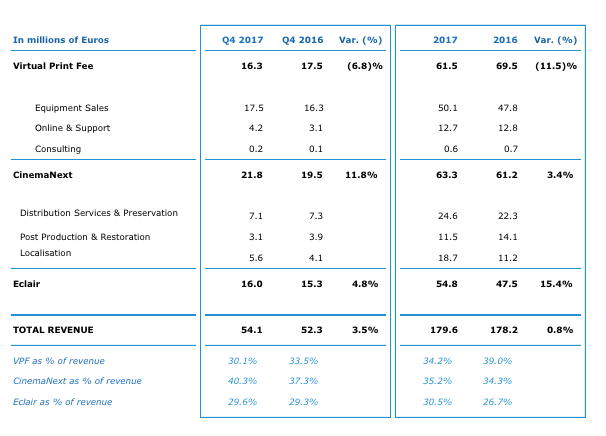 Revenue hits a record high in Q4 2017 at €54.1M - Eclair’s digital transformation accelerates and the launch of a promising Virtual Reality activity in 2018

Ymagis Group (FR0011471291, MAGIS, PEA-PME, TECH 40), the European specialist in digital technologies for the film industry, today reported its consolidated financial results for the fourth quarter of 2017 and its full year revenue for 2017, ending 31 December 2017.

Driven by its technological services activities and recent acquisitions, Ymagis Group continued its growth momentum with revenue up by +0.8% in 2017 despite the structural decline in VPF activities. During Q4, business stood at its highest historical level as revenue reached €54.1M (+3.5%).

As a reminder, the Group’s activity is seasonal with the robust Q4 generating over 30% of the annual revenue.

In line with the Perform plan, services activities grew by nearly 9.0% in 2017, offsetting the drop in VPF revenue and maintaining the Group’s growth over the course of the year. Revenue for these activities stood at €118.1M for the period. This increase is mainly due to the effect of the recent acquisitions made by CinemaNext and Eclair.

Following the initial recoupments in Austria, Poland and the Czech Republic at the end of 2016, VPF revenue fell by €8.1M during the year to €61.5M. The Business Unit’s activity continued to decline as anticipated. During Q4, the VPF represented just 30% of the Group’s activity with revenue of €16.3M versus 39% at the end of 2016. 5,411 screens were under VPF contract at the end of the year compared to 5,919 on 31 December 2016.

Recording buoyant activity, CinemaNext experienced robust growth during Q4, with revenue up by 11.8% at €21.8M. During the fiscal year, the Business Unit was driven by equipment sales, the primary growth lever in 2017 thanks to new cinema builds, as the replacement market has not yet significantly taken off. With an increase of €2.3M in revenue compared to 2016, the Business Unit recorded total revenue of €63.3M in 2017, up by 3.4%.

Eclair’s activities were strong in Q4 with growth standing at +4.6% and revenue reaching €16.0M, driven by Dubbing and Content Delivery in particular. Over the year the Business Unit recorded an increase of +15.6% with revenue standing at €54.8M. This growth is due primarily to the integration of OpenSky Cinema SRL as well as dubbing & subtitling companies acquired abroad. The postproduction division recorded a drop-in activity.

In 2017 the Group demonstrated its ability to offset the anticipated drop in its VPF activities by its services activities whilst continuing its investments for the future through promising technological innovations.

Ymagis entered new key markets during the year, expanding its geographical footprint with partnerships in Northern Europe with cinema exhibitors CineStar and Nordisk Film, and the opening of a new subsidiary in the United States of America. The Group also finalised the creation of its CinemaNext TR subsidiary in Turkey with the aim of becoming the leader in exhibitor services in the country.

With its innovative technological positioning, Ymagis will be continuing its investments in 2018, in particular the development of new platform activities to accelerate Eclair’s digital transformation. Eclair is also set to complete one or two targeted external growth operations to extend the geographical reach of its Versioning and Accessibility division.

For 2018, the Group confirms its organic growth goals for its services activities to offset the loss in VPF revenue. Moreover, the Group’s recent innovations (EclairColor, EclairGame) should begin to generate revenue and earnings.

Finally, Ymagis is preparing for the launch of a new virtual reality activity in 2018. Setting its sights on the considerable opportunities offered by this new technology, Ymagis has decided to open location-based entertainment centres to the public based on virtual reality experiences. The Group plans to launch several of these centres this year in association with its exhibitor partners. Ymagis will not only provide its technical expertise but also original content solutions in a quickly-expanding field. This new activity could become a significant contributor for the Group in terms of activity and earnings, and at the same time strengthen our close ties with our exhibitor partners.

About Ymagis Group
Ymagis is an European leader in advanced digital technology services for the cinema industry. Founded in 2007, the Group is headquartered in Paris and has offices in 25 countries with more than 735 employees. Our core business is structured around three main units:  CinemaNext (exhibitor services: sales and field services, software solutions, customer service/NOC and consulting), Eclair (content services: post-production, theatrical delivery, digital distribution, versioning and accessibility, restoration and preservation) and Virtual Print Fee (VPF) for finance solutions. For more information, please connect to www.ymagis.com, www.cinemanext.com or www.eclair.digital