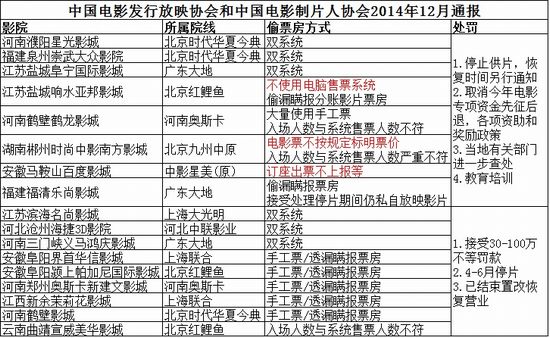 Last week saw the publication of two reports, both of which pointed to upward trends in the Chinese exhibition industry. But while the first pointed to a growth in the number of new screens, the second pointed to an increase in the instances of box office fraud.

A report by Yi En Consulting has shown that as of 30 November, the total number of cinemas and multiplexes in China amounted to 5,540 with a total of 23,349 screens. This has led to a lot of end-of-year analysis and prognostication, coming as it does also close to the re-filing of the Wanda Cinemas IPO prospectus.

The number of new cinemas in Mainland China doubled in January-November 2014 to 957 compared to 476 in the same period last year. Beijing Daily looks at the key players (Wanda, Poly, Bono, etc.) and the dynamics shaping this market, where more players are looking to follow Wanda’s IPO lead.

Beijing Daily reporter learned that this year, in addition to already listed Wanda Cinema, the other cinema companies are also in preparation or wait listed. The first is the original plan and Wanda Cinema accept China Securities Regulatory Commission reviewed the same day in Guangzhou Jinyi Film and Television Media Co., Ltd., but the presence of a false prospectus of the eligibility conditions have been canceled. At the same time, the industry ranked second in the Shanghai Film Co., previously disclosed on April 18 prospectus, to be listed on the Shanghai Stock Exchange, while China Film Corp. also announced June 16 the prospectus, and most raised Uses of funds are investment projects cinema. In addition, the industry said, ranked fourth in the Guangdong market, the earth also has the listing.

The role of 3D and Imax/PLF (premium large format) films has also been significant in 2014.

According to public information, as of the end of October this year, the country released 52 million at the box office over the movie, 26 movie for 3D movie, half of the total box office revenue, 3D movies have occupied half of China’s film market. With such a huge market demand, the theater in order to attract customers have increased construction of 3D auditoriums. A film industry insider talking to Beijing Daily, told reporters: “Look at the Beijing movie theaters, an average ticket 2D movie ticket is 50 yuan, and a 3D movie ticket fares usually more than 100 yuan, the theater in order to the difference will be considered to improve the middle by large screen IMAX auditorium box office. ”  LINK

In the second article, turning its attention to the future, the focus is on the growth in the Tier Two and Tier Four cities.

Given the saturation of the likes of the Beijing and Shanghai cinema markets, this is where most of the future growth will have to come from.

According to Yi En Consulting data show that in 2013, China’s urban theater building was sustained momentum of development, the national new screen 5077, an average increase of over 13.9 screens per day. In these new screens, the four-tier cities, the Midwest region accounted for more than 50% of the country the number of new screens. It is worth noting that the four-tier cities have become a growth point of cinema development.

Compete with other second-tier cities in the cinema box office firms, land management concepts to hit theaters on the second-tier cities in the country’s development since its inception. It is understood that most of the earth’s cinema theaters generally have five auditoriums, with an average ticket price 30 yuan, for the four-tier cities have strong audience appeal. Before the State Press and Publication Administration of Radio, published from January to September of 2014 grossed 10 cinema companies, ranking second only to the earth Wanda Cinema theaters in second place, revenue reached 1.79 billion yuan profit. Insiders said that China’s film market tier cities have a huge space for development.  LINK

But the article also warns that a bubble may be forming in the cinema sector.

Injecting too much money could make cinema competition excessive, some cinemas in order to increase the potential audience of people, spend a lot of money to build the theater. Cinema invest blindly follow the trend. There are some film companies that seek to enhance their competitiveness through the construction of the theater to expansion of business scale, the establishment of more fixed assets for the company to enhance the industry’s influence.

In addition, crazy influx of capital will increase investment risk and the possibility of blind investment industry will produce bubbles. Huang Fei Huaxia Film Distribution Co., Ltd. Deputy General Manager of the Group of the Beijing Daily, told reporters that despite the influx of capital in favor of the development of cinema, but also lead to the generation of foam industry [sic], hinder the overall development of China’s film market. Some companies in the choice of investment projects need to be careful regarding cinema.  LINK

Beijing Daily (again) looks at how with box office revenue declining as a result of more intensive competition, cinemas are forced to put more effort into concessions, advertising and even trying the showing of event cinema.

At present, China’s film industry is mainly carried out using split system on the distribution of benefits between the box office film companies and theater. Among them, the theater often has a strong voice in the box office split in particular occupy an important business district of the modern multiplex cinema even more so. Generally speaking, theater and cinema business links to obtain more than 50% of box office revenue, specialized distribution company to further obtain a certain percentage of the income proxy issue.

Juan square meter Guangzhou Jinyi Film and Television Media Co., Ltd. Marketing Director North Region to Beijing Daily, told reporters that due to the specific row piece movie theater work is determined, and the theater box office revenue generated by the film industry is the most important source of income. So after negotiation, the theater often get a higher percentage of the box office, which also constitute the main source of income theater, movie box office revenue may account for about 70% of all revenues theater. LINK

Meanwhile box office fraud continues to be a problem in China, with 17 cinemas found out and fined last month.

In the reports outlining instances of uncovered box-office fraud published in February and May the number was 15 and 11 respectively, meaning the problem is on the rise.

China Film Distribution and Exhibition Association and the China Film Producers Association jointly issued the “December Bulletin” on the 17 stolen by hiding leak theater box office to punish behavior, fined the minimum amount of 30 million, the highest up to 100 million, of which nine theater pieces indefinitely stopped, the other eight have been sentenced to stop Ying 4-6 months.

In this 17 theaters being processed, Quanzhou, Fujian Province Chongwu public theater, Yancheng Funing International Studios, Henan Puyang Star Studios 8 theater ticket was verified using a dual system, Henan Hebi Crane Dragon Studios 5 extensive use of manual theater tickets, Maanshan Baidu Studios Long-term use of “reservation ticket does not report” and other means of evasion concealed box office. In addition, in order to increase the punishment, so that the theater be more discipline, this has been investigated several theaters, stop for a slice of the period of two month period surged past 4-6 months, the amount increased to 30-100 million.  LINK

What is even more staggering is that this may just be the tip of the proverbial iceberg, with between 10% and 40% of all box office revenue estimated to be siphoned off and not included in formal accounting, according to some analysts.

Steal the box office was for many years the existence of black rule, the healthy development of the industry (especially in the interests of the producers) cause great harm. According to the deputy director of the National Film special funds do Dong said, was stolen last year at the box office over two billion (about 21.7 billion for 10% of the total box office). It’s still just a conservative estimate, the market share of speculation about evasion concealed box office ranging from 10% to 40%. Theatrical distribution for many years there have steeped staff broke the news, “If you are on the road or ambitious theater manager, pulled one million a year by stealing the box office is not a problem.” For example, Liaocheng, Shandong Century Studios 1 On 17 May, the 18th (as of 13:00) actual box office 51,065 yuan, 18,000 yuan, reported only 1970 yuan, 4150 yuan, the difference is very large.

Why steal the box office? Reporter had interviewed a number of cities nationwide theater managers, most of them believe, is mainly theater manager for personal gain. But it was also analyzed, and now theater building at an alarming rate, with an area constantly emerge new theater, cinema audiences but did not achieve the appropriate growth, competition increases. In fact, some local theater, in the business there is a lot of pressure, and some losses, facing elimination, it is also a self-help way to steal the box office. As to how to put an end to this phenomenon, theater managers believe are important regulators of relevant departments, can serve as a deterrent. In addition, the production company is now also jointly strengthen prosecution, I believe the future of this phenomenon will be less and less.  LINK

So while personal gain is a motivating factor for fraud, there is also intense competition that is forcing some cinemas to resort to such tactics. It may be optimistic to hope that the situation will be brought under control with centralised ticketing system and accounting.

China continues to grow at a phenomenal rate and there is plenty of potential left in the market. Yet unchecked growth and fierce competition risks leading to more instances of fraud and creates a potential bubble, as we have written about before.