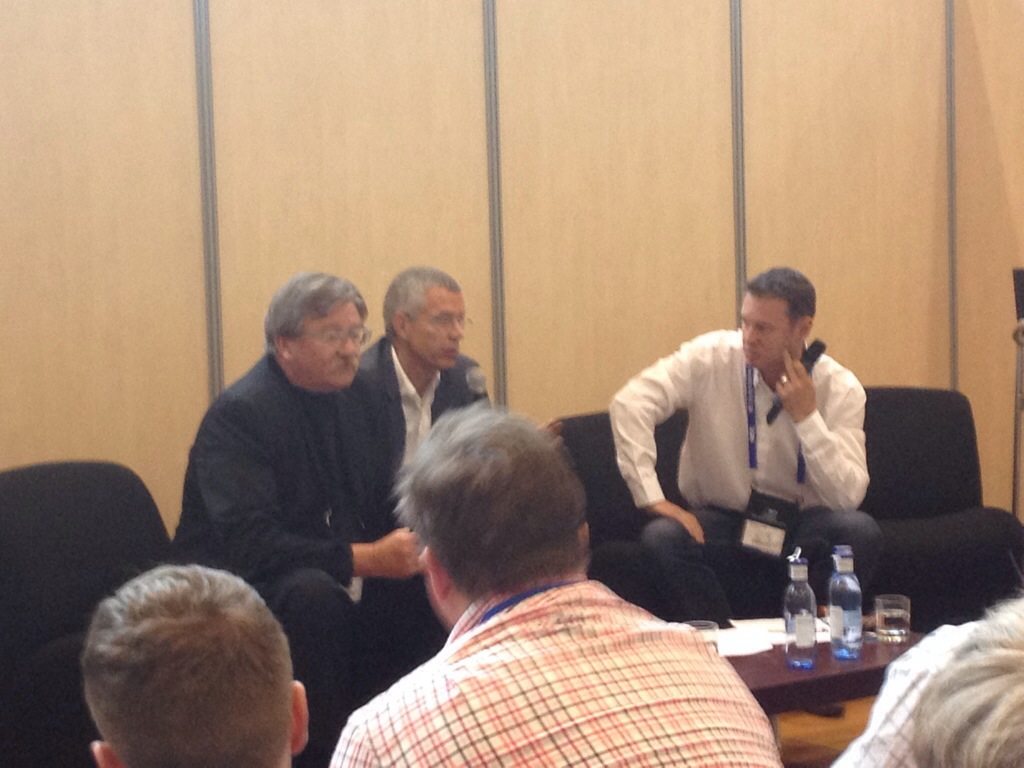 Next panel-ette starts a bit early with IHS’s David Hancock saying he will try to “keep it short, sharp and punchy.” RealD and IMAX in the ring with him.  Here are some of the highlights from the panel discussion as submitted live via iPhone:

“How do you define large screen?” asks Hancock. Andrew Cripps of Imax cites Los Angeles Times article that reported that premium large format (PLF) screens are 20% larger than regular size movie screen but says in IMAX “a lot of other elements go into it.” RealD’s Bob Mayson notes irony of discussing big screen in a very small conference room. [Indeed].

Luxe is an Eastern Europe/Russia focused initiative. Mayson told me earlier that they announced in a recent investor call that they now have 22 PLF screens committed of which at least half should be in place before the end of this year.

Cripps talks about working with film makers and the ‘total experience’. Hancock asks what drives it. Mayson says premium ticket prices and the ‘thirst for a better experience, particularly when there is so much competition for the consumer’s dollars.’ He points out that when he was at Kodak he sold a LOT of film to IMAX. [that was before Cripps joined].

Mayson says 800 IMAX screens show films and there are a similar number of PLF screens. Mayson says there are 51 PLF brands. Cripps corrects him: 66 brands. “But IMAX has been out there for 45 years.” Imitation is sincerest form of flattery, Cripps jokes, as he points out most of these brads have an X in the name.

Cripps mentions Cineplex in Canada that have both their own-branded PLF and IMAX. Those of their cinemas that have both have the best IMAX BO numbers. [Very interesting.] This matches their own research elsewhere.

Mayson hopes to have 50-60 Luxe screens this time next year either equipped or committed.

Cripps: Are we confusing customers? In Russia IMAX is consistently top pricing and that is down to premium brand. Both point out they don’t set the price. Mayson says ticket premium in Russia is 30%. Cripps says their premium is more. “Are you saying that we are undercharging?” Mayson asks to laughs from the audience.

Cripps says the VIP, luxury and in-theatre dining cinemas are all part of the premium trend, alongside PLF. Sapphire IMAX super-high end premium in Moscow and St Petersburg where most expensive ticket are USD $100 and average USD $60-$70. The idea might be exported.

Cripps says China is big focus, as is Russia, and India (“in longer term”), but still growth is in Western Europe, especially Sweden. Mayson ads Brazil to the list. Hancock: “Is China the home of IMAX these days?” Cripps says it is important but emphasizes that IMAX is at home in the whole world.

Mayson observes that the only image brands found on movie posters (i.e. non-audio) are IMAX and RealD. He talks about putting more light on the screen. Hancock ask about  laser projectors going into IMAX screens, but not clear if it’s this year or next. RealD came clear about their laser strategy last week. They have a fibre-optic laser box. RealD went public in their recent full-year results [how did I miss that one?].

IMAX laser will be for the really big screens.  For instance, Empire Leicester Square will get it. IMAX bough laser patents from Kodak and will be implementing them. [Nice bit of irony with ex-Kodak veteran Mayson sitting next to him].

RealD talks improving the visual experience for all of their 3D screens and not just the Luxe/PLF screens. Mayson says that they don’t restrict what film and how cinemas book them in – not so subtle dig back at IMAX/Cripps. Mayson talks RealD’s TrueImage and working with film makers like Sir Peter Jackson. Should be commercially available in Q1 or Q2 2015. Cripps fires back that IMAX also works closely with film makers. [Everybody on the panel sounding more aggressive from speaking fast and trying to compress their message into the short time slot allocated].

Hancock says that IMAX and Luxe are in a complimentary space. Mayson agrees. Cripps talks about films that were only released in 2D. Now the discussion descends into brightness left-eye/right-eye bragging. There is a brief question from Hancock about sound. Apparently it also matters, for those of you that missed the previous talk.

Cripps talks about launching 12.1 audio together with laser projection. Mayson says Luxe’s minimum is 7.1 and jokes that when IMAX launches 12.1 then Luxe will launch 14.1.

Hancock asks something I can’t make out. “Can you ask a better question,” Mayson replies in a joking tone. The session is coming to an end, but not being guillotined like the immersive sound panel since there are no further sessions. There are some jokes about 10 and 11 year licensing partnerships between exhibitors and IMAX and Luxe respectively. Hancock apologizes for the last question and with that the session ends. Hancock may be victim of his own success in keeping session so snappy he may have run out of questions.

This session really went down like a friendly boxing match. No knockouts but points to both contestants.