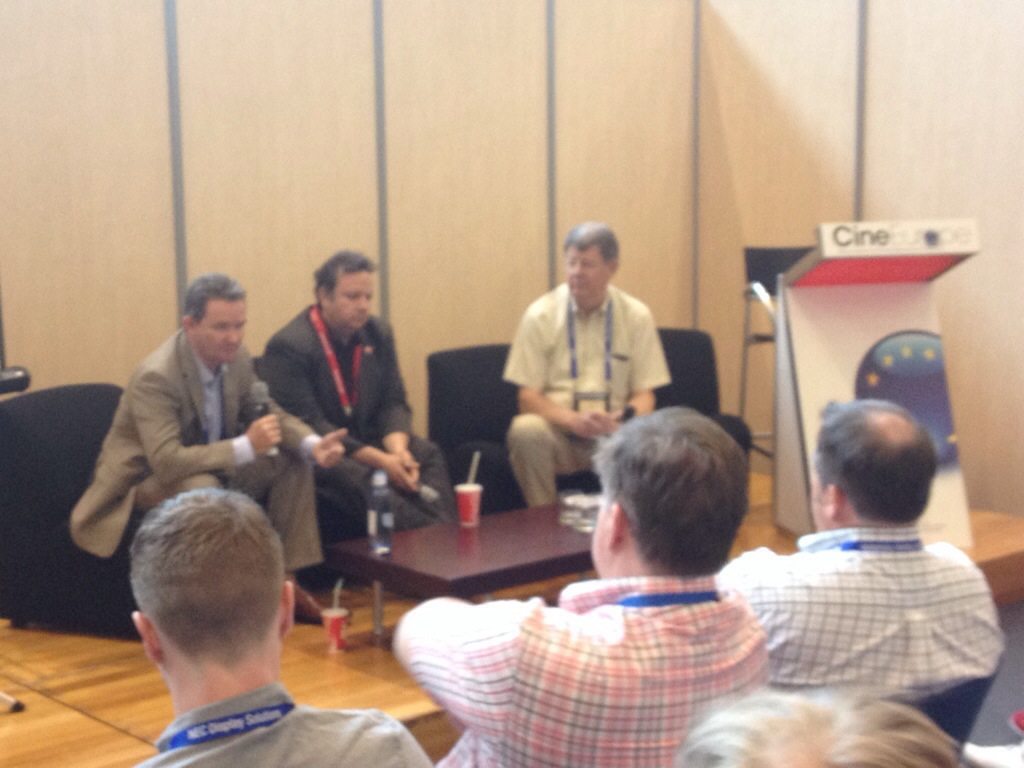 With just 60 seats in a temporary room the middle of the trade show, there are 30+ people standing at the back. Either the immersive audio session is a wild success or the venue is too small. And there is plenty of surround sound which can be seen throughout the rest of the show.  The following are highlights from the panel discussion as submitted via iPhone:

Dave Monk of the European Digital Cinema Forum says time is short and wants to gets to grips with, ‘what is immersive sound’.

Brian Claypool from Barco talks about Auro and a “natural sense of immersion” that was cost effective that could easily integrate with existing workflows. “Let’s have the premium experience at the cinema,” he says. Monk asks what key differentiator between 5.1 surround and immersive audio is. In one word, ‘height’. Three levels – two 5.1 plus overhead sound.

Stuart Bowling (standing in for Dean Bullock?) from Dolby says that sound had taken a backseat as a way to transport you away as a cinemas goer. “Pushing the envelope pushed us to Atmos. Sounds is that narrative of motion pictures that gives you an emotional response.”

Question from Jerry Pierce of ISDCF: What is the view of the Atmos installation here at CineEurope? Bowling said he wasn’t involved in it and not entirely familiar. He then goes on to explain the basics of the technology that underpins Atmos instead. Claypool says that Barco doesn’t like installing their system into these types of environments because they are not representative of what cinemas are like.

[Having personally missed the Atmos screening of Warner Bros’ “Into the Storm” I did hear from several people who reported they were just being bombarded by sound from every direction.]

Monk says that the sound levels of some of the trailers have been “awful”.

Question from Henry: What is the difference between Atmos and IMAX sound? Bowling says IMAX is 5.0 and speakers are full-frequency-range. Brian talks about challenges of having to do do different mixes for different formats and what challenges this entails.

There are some question about install levels. Claypool reports Auro has 200 screens installed presently with 300 committed. He reels off a list of summer titles. Bowling says Atmos install level just reached 500 screens and another 150 screens are committed. He reels off a list of Atmos titles that matches the one Claypool provided; “Lucy”, “Hobbit 3”, “Into the Storm”. The goal is to average about 65 titles per year.

Monk refers to Julian Pinn’s Box Offce Pro article that argued that having multiple standards encourages innovation (as did my colleague Sperling in his obituary for Ray Dolby here on CJ.)

Stefanie asks for elaboration on the speaker configuration. Bowling elaborates in a very technical explanation that is difficult to detail using an iPhone keyboard. Stefanie asks for further elaboration on the disjunction issue. Claypool then picks up on some of the what the different speaker and amplifier designs are trying to overcome. The message is that you can fix any problem if money is no issue, but that both systems look for cost-effective solutions.

This leads us to a question about cost. Monk jokes that the perception is that “Auro is expensive and Atmos is very expensive.”

Claypool replies that, “Our brain dead response is [that the cost is] twice what it is for 5.1″ and Bowling says that Atmos is a USD $5,000-$10,000 premium over Auro.” Imperial in Copenhagen has 64 speakers and is largest Atmos install. How much did it cost? About USD $70,000 reports Bowling. “More,” counters Brian. They both agree that we need to remember how much digital cinema projectors cost when they first came out. [Bowling later clarifies that he was providing an average install cost].

Monk, “this is so short that it is painful to me.” Question: Can you install balcony equipped auditoriums? Yes, they both Barco and Dolby have done it, but it can be challenging.

Last question concerns the home market. “This will be terrible news,” says the question asker. Claypool says that Barco is in immersive audio only for cinema. Bowling, as expected, says that Dolby “is for the cinemas and beyond the cinema.” He points out that a flavour of Auro is available in mobile phones.

Monk says that they are getting multiple signs to wrap up. Thus it ends.

“We are early into this; less than 1% of screens converted,” is how Claypool summarises it as they are getting booted off the stage.