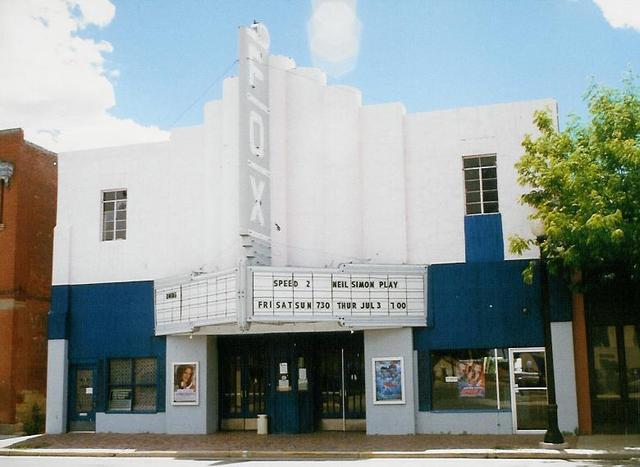 As the clock ticks down for the end of 35mm film prints, so the race is on to save the last few small town cinemas that cannot afford the switch to digital. We are now talking months, not years.

In the United States funds typically come from one or a mixture of three sources, all of which we have profiled here at Celluloid Junkie in the past: local community fund-raising, on-line crowd funding and even grants or donations from the local Chambers of Commerce. There was even an effort to tap the Pepsi Refresh Project a few years back, while Honda did something similar for drive-ins.

But philanthropic foundations have had a relatively low profile until a recent effort got underway in Colorado. While charities alone cannot save all the small cinemas across the US, the experience in the Centennial State shows that they can provide critical seed funding. Over the next 12 to 24 months, this can mean the difference between life and death for thousands of small town cinemas across the United States.

The key to the success of Colorado’s venture has been the bringing together of three critical actors: State authorities,  non-profit bodies and private charities. As outlines last year in The Denver Post:

A number of foundations, the Colorado Office of Economic Development and International Trade, and the Denver Film Society have teamed up to create grants ranging from $10,000 to $30,000 for theaters converting to the new digital equipment required by the film industry.

Film distributors, which no longer distribute traditional celluloid prints, have converted to digital format. The new distribution method requires digital projectors, which cost an average of $60,000 to $70,000 each.

The state said many rural theaters can’t afford these projectors and will probably close, threatening the arts, culture and fabric of the community.

The last sentence has been crucial in mobilising government, business and philanthropic support, as we will see.

While Colorado is best known for skiing and Denver (as well as the recent legalization of recreational marijuana use), it is a large rural state with towns of just a few thousand people and long distances to drive to get to the nearest cinema.

Colorado Central Magazine published an article last year called ‘LIGHTS OUT? The Clock is Ticking for Small Rural Movie Theaters‘ in which it detailed some of these small towns and cinemas that you would never have heard of. The role that these cinemas play was spelled out clearly by Colorado’s Film Commissioner:

“Local small town cinemas are a key amenity for local workforce retention and play a crucial role in enhancing culture and providing a strong sense of place,” said Donald Zuckerman, Colorado Film Commissioner. “In addition to showing newly released films, these venues often function as a meeting place and social center and are sometimes the only community facility within their county. Films, special events, educational screenings and fundraising events at the theaters foster activities for various community groups and enhance local learning opportunities. Moreover, the theaters are an affordable leisure option for families and the elderly, and serve as a safe, secure venue for young people.”

It’s about much more than just films for these cinemas. These cinemas are a large light in their local community that would go out if their cinema business died: Buena Vista in Chaffee County, Ute Theater in downtown Saguache, Skyline – the only commercial cinema serving the Cañon City, Florence and Penrose area, the Jones multi-function venue in Westcliffe.

All of these venues and many more have launched fund raiser and are trying to go digital. Below you can see the ‘Thank You’ screening that Skyline put on for the crowd funding supporters when their campaign succeeded. 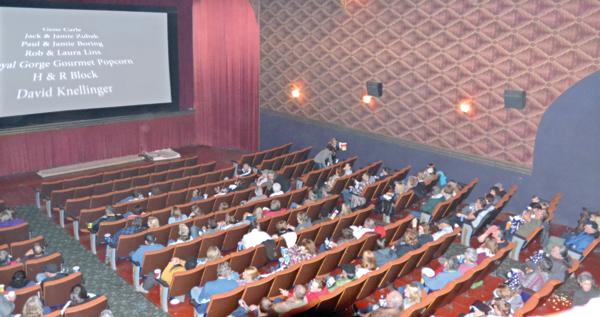 A critical component for all of the above and many other cinemas in the State has been the Rural Theater Digital Conversion Grant, which started with the Colorado Economic Development Commission (EDC) approving $200,000 from its Strategic Fund Initiative at the outset, but which has had a major ripple effect as other critical parties came onboard.

The requirements for theatres wishing to apply have been quite specific and clear.

Both nonprofit and for-profit theaters can apply for funds. The available funding amount is variable and dependent on total demand and the specific theater, including theater location. Requirements to receive grants include:
• Minimum cash input of $10,000
• Minimum 2-to-1 match for EDC Grant funds
• Applicant must also apply for local Community Development Block Grant (CDBG) Business Loan Fund
• Minimum three hours SBDC consulting
• Theater will need to demonstrate to the SBDC and the Colorado OEDIT that it will be economically viable after the digital conversion
• Theater must receive a technical review to ensure new equipment will function properly
• Theater must be in a rural area that equals the area outside the boundaries of a city or town of more than 20,000 in population and the urbanized area contiguous and adjacent to such city or town
• Priority will be given to theaters in communities geographically distanced from communities with already converted theaters

DCI, Denver Film Society and Gates Family to the Rescue

Two non-profit organisations and two philanthropic institutions were instrumental in taking the Grant further and allowing it to have more of an impact than any other state initiative that we have come across. The Denver Film Society operates the Sie FilmCentre in Colorado and had themselves experienced the threat that a failure to switch to digital represented.

DFS launched a Kickstarter campaign called “Secure the future of the Denver Film Society!” with the aim of raising USD $150,000 to buy four projectors in the summer of 2013, in the end achieving USD $176,925 from over 2,000 backers.

To this date DFS remains the second highest Kickstarter campaign to raise funds for digitization (beaten only by a cinema in Manchester, Vermont). DFS thus knew and understood the requirements and means of achieving fundraisers for digital equipment. Quoted in the Colorado Central Magazine (CoZine),

Ryan Oestreich, director of Sie FilmCenter, cites about 25 examples of Colorado theaters using direct mailings, crowd-sourcing and Kickstarter to raise money. Others are taking out loans or just planning to shut their doors. The DFS has served as technical and fundraising advisor to many rural nonprofit theaters and has also served as fiscal sponsor for the disbursement of grant funds awarded to certain theaters across the state.

The other critical non-profit partner was Downtown Colorado, Inc. (DCI – yes, sharing the initials with the entity that created the very foundations for digital cinema), which helps small business in Colorado downtowns, commercial districts and town centers through a broad array of programs, partnerships, events, networking and other resources.

DCI’s involvement was secured in 2012 when  “the group sponsored a meeting in Brush, Colorado with the Brush Chamber/Main Street Manager, held with an evening event at the Sands Theater. The theater owner spoke of its history, his love of the movie business, and his concerns about the cost of upgrading equipment and how it may impact small, independent theaters throughout the state, according to Katherine Correll, Executive Director of DCI.” 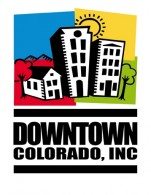 DCI was the hub in the ‘Save Our Screens’ effort that ultimately came to involve the DFS, the Department of Local Affairs (DOLA), El Pomar Foundation, OEDIT, Colorado’s Office of Film, Television and Media (a division of Colorado Creative Industries), students from University of Colorado Denver, the SBDC, and the U.S. Department of Agriculture Rural Development.

Equally importantly, DCI was instrumental in connecting the DFS with two charities in the state that provided the further enabling funding:

– The Gates Family Foundation makes philanthropic investments statewide that contribute to the quality of life in Colorado, create opportunities for youth, and support stewardship of this extraordinary place, particularly the state’s natural inheritance. (Not to be confused with the Bill and Melinda Gates Foundation)

– The Boettcher Foundation’s mission has been to invest in the minds and mortar of Colorado. They do this by awarding full four-year in-state scholarships to the state’s top high school seniors and by providing capital grants to Colorado nonprofits.

The purpose of the effort was not immediately obvious to the two foundations, but once they grasped the implications they were quick and generous in coming onboard. As quoted in the recent AP article:

Beth Conover, senior program officer at the Gates Family Foundation, said trustees at Gates — founded by a Denver family that made its fortune in industrial and automotive parts, not computer software — were a bit skeptical at first.

“If you haven’t seen a pattern or thought about it, it could sound like a one-off, funky idea,” she said.

Gates ended up earmarking $120,000 for the project and Boettcher $80,000 with an initial goal of helping 16 theaters. A state pool of $200,000 was also established, Zuckerman said. Grant-giving began in 2013. As the first year was ending, Gates trustees approved another $65,000 with the goal of helping three more theaters convert.

The remarkable things is that DCI was able to act as enabler and co-ordinator of all this with a staff of just two. But speaking in the Denver Westword blog, the motivation was a powerful force:

“What happened was, about a year ago a couple of our communities — the city of Brush in particular — came to us and said, you know, we don’t exactly know what we should do. We have a theater on our main street and it is supposed to convert to digital projectors, and we don’t know how we’re going to do it,” says Katherine Correll, executive director of Downtown Colorado Inc.

“The Sands in Brush is the theater that really brought this to our attention [PICTURE BELOW],” says Correll. “When you think about it, that theater it is not just a business — it is at gathering place, it is a cultural activity, it is the thing that keeps the kids and families there on Saturday night, instead of driving to the next biggest town. It is really important cultural piece of all of our communities in Colorado — even looking in Denver at the Mayan Theatre or the Esquire, some of these older theaters. They really do play an important role in in our communities. But in these smaller, rural areas, it is the thing to do. It is the thing, and they only have that one thing. It’s like losing the post office or the grocery store; it is key to the survival of that community.”

A Model for the Rest of the United States

How funding comes together is ultimately different for those theatres able to make the switch. For the Fox theatre, whose photo is at the top of this article, situated in the small town of Walsenburg (pop. 3,000) the AP article illustrates just what a patchwork quilt of funding ultimately brought about digitisation:

Ultimately, The Fox got $20,000 from Gates, $5,000 from Boettcher and $6,000 from the state. Local volunteers raised more, including $25,000 through a letter-writing campaign that targeted every household in Huerfano County. Another $25,000 came from a U.S. Department of Agriculture rural development program. “What other thing do you have in this town?” Birrer said of The Fox. “We don’t have anything else for young people.”

The challenge now is to replicate Colorado’s model in other US states, particularly rural ones where small town cinemas are most at risk from being wiped out by the end of 35mm film. 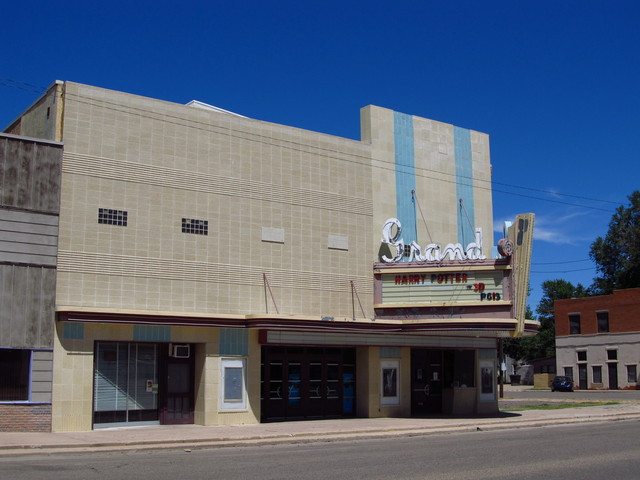