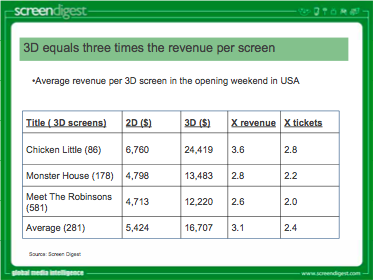 ‘Beowulf’, the first ‘grown-up’ digital 3D release, is out and while it conquered the box office and heaps were praised on the 3D animation, the underlying numbers spell bad news for digital 3D.

There’s been an avalanche of press releases, news, announcements and comment pieces on the digital 3D aspects of ‘Beowulf’ in the run up to the films US and international release. Everything from the number of Russian screens showing it in digital and digital 3D (24, in case you can’t be bothered to click on the link) to how many countries will be showing it using the Dolby system (12) – though at 75 screens in total it is less than the 86 screens in the US that Dolby screened the first digital 3D films on two years ago, then using the RealD system. One of the best overviews is provided by the always-worth-reading Carolyn Giardina in The Hollywood Reporter (‘Beowulf’s’ bow takes 3-D to the next level). There we learn amongst other things that:

Real D was the first 3-D system out of the gate and represents the lion’s share of current installations. At press time, it was expected that there would be about 620 Real D-equipped auditoriums showing “Beowulf” in 3-D this weekend. Real D’s technique requires the use of a “silver screen” and “circular polarized” glasses. It enables 3-D on screens maxing out around 47 feet high. For any system, screen size comes down to how much light can get to the screen from the projector. Dolby recently completed its beta phase, and deployment has started. It expects to have about 30 screens domestically and 75 worldwide for the “Beowulf” opening. Installed systems support on average 40-foot-high screens. Dolby’s system doesn’t require a special type of screen, using those that are standard in today’s theaters, but audiences would use special Dolby glasses. NuVision also recently began U.S. deployment of its 3-D system, and the company estimated it would have six screens showing “Beowulf” in the U.S. and about 100 in Europe. It doesn’t require a special screen.

So while RealD leads the digital 3D race in North America by some marging, it is a more closely fought battle between the three leading contenders RealD, NuVision/ExpanD and Dolby in Europe, with NuVision/ExpanD ahead. But the implications of this will have to wait for a future post. What is more interesting right now is the box office data and the implications that this has for the future of digital 3D.

The reporting on the weekend’s box office statistics from the Hollywood Reporter (‘Beowulf’ beheads weekend boxoffice) and Variety (‘Beowulf’ slays competition) is in agreement on most points but differs in once crucial regard that makes all the difference between ‘bad’ and ‘much worse’ news for digital 3D. What they both agree is that ‘Beowulf’ took $28.1m in total and that out of this Imax took a staggering $13.6m from just 84 screens, giving it a whooping $42,619 screen average. But then the counting diverges.

The THR article above put the North American digital 3D breakdown as follows: ReaD (620), Dolby (30) and NuVision (6) for a total of 653. But as this was written pre-release, this number was always likely to go up. Post-release THR puts the numbers at 850 3D screens in 742 locations, which includes the 84 Imax screens, so 766 pure digital 3D screens. But Variety claims that “Of the 740 3-D screens on which “Beowulf” played, 648 were Real D systems. Imax showed the film on 84 of its 3-D screens, while Dolby Digital 3-D made up the rest [i.e. eight],” meaning that 656 screens were digital 3D, though Variety appears to have overlooked NuVision’s six (?) screens and they differ by 110 screens. Whom to trust? But it gets more complicated.

According to Variety ‘Beowulf “grabbed roughly 40% of its estimated $28.1 million haul from digital 3-D screens.” Add to this the 13 per cent from the non-digital Imax 3D screens and it means that digital and analogue 3D accounted for 53 per cent or more than half of the BO takings, which would truly mark a watershed moment in the redemption of stereoscopic film production and cinema exhibition. However THR claims that ” [t]he pic’s 3-D theaters represented 20% of its overall engagements but contributed 40% to its weekend gross, execs said.” This would still be impressive, but not in the same way that Variety claims, because it would mean that digital 3D accounted for around 27 per cent or a quarter of all takings. Let us take each of these figures in turn.

According to the THR figures of 766 digital 3D screens accounting for 27 per cent of the box office works out to $7.58m or $9,904 per screen, compared to $16.86m for digital 2D and analogue 35mm screens for an average of $7,239m. This would mean that digital 3D screens took 1.36 times what their 2D counterparts did. Still enough reason to crack open the celebratory mead? Not quite.

But if we look at what ‘Beowulf’ took at the box office from a historical perspective, things look a lot worse. The above table is from a presentation given by Charlotte Jones, the digital 3D expert of Screen Digest, comparing the takings of the first three digital 3D films released in parallel to 2D (‘Tim Burton’s Nightmare Before Christmas’ is not included as it was an exclusive ‘Disney Digital 3D’ re-release). We see that the first title ‘Chicken Little’ took 3.6 times the revenue in digital 3D as it did on analogue 35mm and digital 2D. However this figure fell to 2.8 for ‘Monster House’ and 2.6 for ‘Meet the Robinsons’.

If Variety is correct and ‘Beowulf’ took 3.12 on 3D what it took on 2D it represents a small reverse, but if Hollywood Reporter got it right, then the downward digital 3D spiral continues and what we are seeing is the routinization of charisma that digital 3D exerts over the box office. It becomes the norm and ceases to attract authority due to its novelty. When ‘Avatar’ becomes a monster hit in 2008 it will not be because it is a saturated digital 3D release but primarily because it is a spectacular James Cameron film.

The only one to come out of this is looking good is Imax, with its astronomical BO takings, but this is from a very small base that is unlikely to be expanded as significantly as digital 3D has, because it will never piggy back ride on the wider digital cinema conversion. Even if/when Imax goes digital, it will still face physical and structural-economic constraints in the multiplex environment that will always limit its reach.

I will wait for Screen Digest to crunch these numbers definitively but I’m sure that Paramount, RealD and others have already poured over them and this was not what they were hoping for – unless Variety is right, Hollywood Reporter is wrong or my maths are completely off.