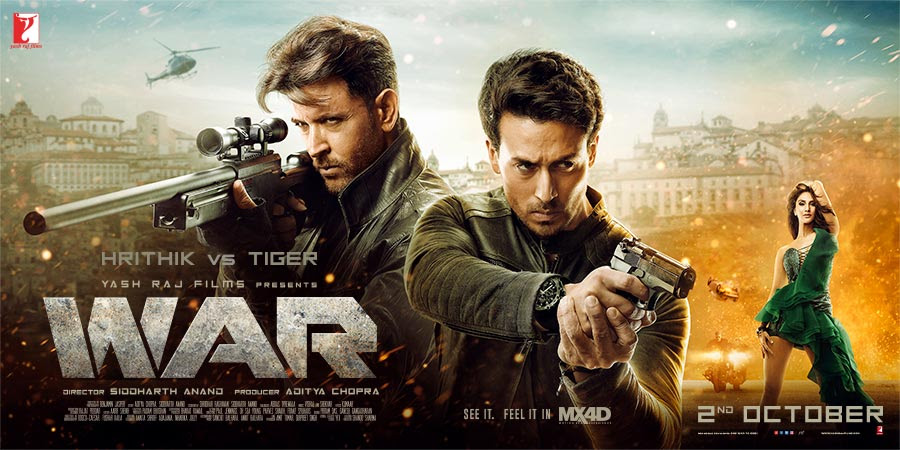 The leading international distributor of Hindi films, Yash Raj Films, has teamed up with California-based MediaMation to program the next Indian Blockbuster title “War” in MX4D. “War”, promises to be the biggest action spectacle of all times for the Indian film industry. The high-octane adventure has two of the greatest action heroes of the country, Hrithik Roshan and Tiger Shroff, pitted against each other in a massive showdown. “War” will see the two superstars push their bodies to the limit and pull off jaw-dropping, death-defying stunts in a bid to beat each other. “War” has been produced by Yash Raj Films. The film, which also stars Vaani Kapoor opposite Hrithik Roshan, is set to release in Hindi, Tamil, and Telugu on the big National Holiday of Gandhi Jayanti, October 2nd, 2019.

“While planning for our film, “War”, we were determined that we would make an adrenaline-pumping, visually stunning action extravaganza that’s never been seen in an Indian film before. We’ve got a huge car sequence featuring Hrithik Roshan and Tiger Shroff, India’s best-known action heroes, that has been shot entirely on ice. We shot this in Finland, which is in the Arctic Circle. Our production team informed us that this is the first-ever film worldwide to attempt such a complex action sequence on this scale in the extreme climate of the Arctic. We look forward to showcasing these visually stunning moments in MX4D EFX and believe it will be the most enjoyable viewing.” said director Siddharth Anand.

MX4D immersive auditoriums feature luxurious state-of-the-art seats equipped with a full range of motion and effects including scent, neck and leg ticklers, vibration, and air/water blasts to offer a new form of entertainment not accessible in-home. Additional atmospheric effects include wind, fog, rain and strobe. Due to it’s patented armrest, MX4D is the only company to offer each and every viewer the same four dimensional experience. MX4D was introduced in India by the country’s fastest growing cinema chain, INOX, at its Inorbit Mall, Malad, Mumbai multiplex. The audience response to the technology has been incredibly positive, to India’s first MX4D auditorium.

Alok Tandon, Chief Executive Officer – INOX Leisure Ltd adds, “Offering the best and the most unique cinema watching experience to our patrons has always been our endeavor. It is such a huge privilege to see the MX4D format making its Indian cinema debut in our premises with “War”. We are eagerly looking forward to this stunning combination to roll out. With its spectacular features, MX4D will depict the movie in the truest of elements and take the cinema viewing experience to unprecedented levels.”

About Yash Raj Films
Yash Raj Films [YRF] is one of India’s oldest and most respected story-tellers. A decade-old film & entertainment company with a fully integrated presence across the entire value chain covering everything from production, worldwide distribution, marketing, home entertainment & brand partnerships to design, licensing, consumer products, interactive media & talent management with offices across India and in the US, UK & UAE differentiates it from all studios in the country.

About INOX Leisure Limited
INOX Leisure Limited (INOX) is amongst India’s largest multiplex chains with 144 multiplexes and 598 screens in 68 cities. INOX has redefined movie experiences in India making it truly a 7-star experience. Each INOX property is unique with its own distinct architecture and aesthetics. Beyond the normal screens, INOX also has INOX INSIGNIA for the discerning audience or KIDDLES for young patrons or MX4D EFX Theatre for an immersive experience or the panoramic viewing with ScreenX at select locations. INOX brings the very latest in projection and audio technology with INOX Laserplex, IMAX & INOX ONYX. Some of the key multiplex features include plush micro adjustable leather recliners with a butler on call facility, gourmet meal choices by celebrity chef, designer staff uniforms. For more information on INOX, movie ticket bookings, exciting updates, trivia and trailers, visit www.inoxmovies.com.