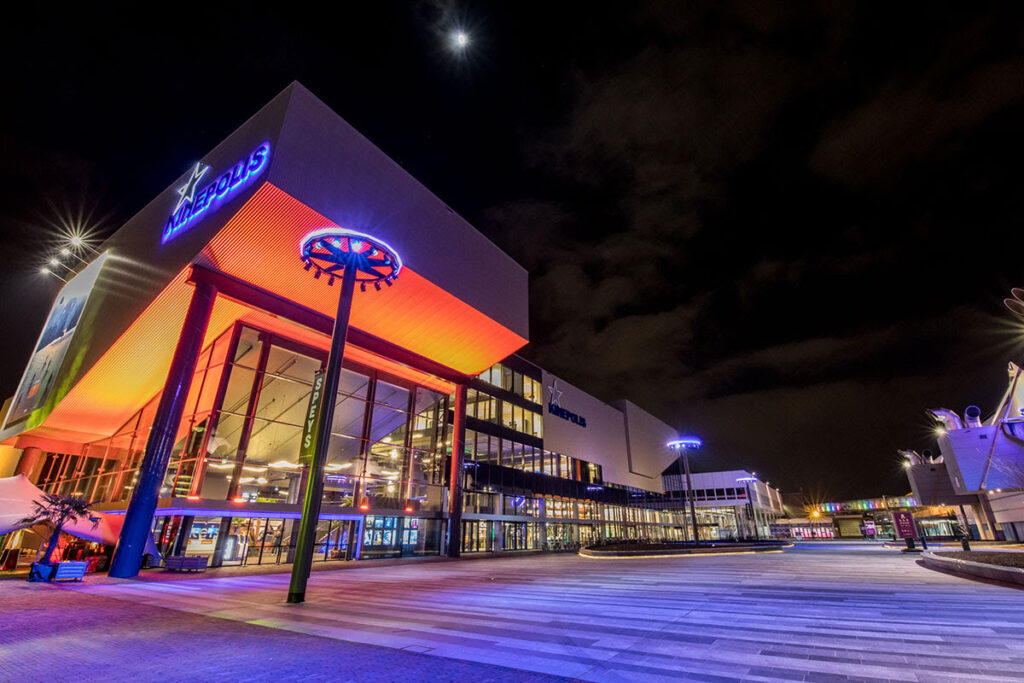 MediaMation (MMI) has revamped many of their services as the world continues to open amidst the pandemic crisis. The entertainment industry has taken quite a hit in the past year and MediaMation is one of the trailblazers that will help create a clear path for innovative entertainment to rise again.

As facilities have and continue to reopen, MMI has already begun their worldwide tour as well. Here is a look into just a couple of current installations and projects with some of MMI’s trusted partners and clients.

Kinepolis Jaarbeurs Utrecht and Kinepolis Leidschendam
Kinepolis Group is a successful theatre chain stretching to various parts of the EU that has provided many wonderful experiences in theatre entertainment. With such a strong company history and theatre branding in their arsenal, they have been able to stay at the forefront of the cinematic industry in many regions of the EU.

In the past they enhanced their cinematic experience a step further and will soon be doing it again! How did they step up their entertainment game? By opening an MX4D Motion EFX Theatre in their location of Utrecht, Netherlands back in 2019. On top of that, they are expecting to open up a second MX4D Theatre in Leidschendam, Netherlands very soon!

Cinemovida in Perpignan France
Even while the world was shutdown, MMI certainly was not. In the midst of COVID-19, Cinemovida was thinking about the future of cinema and wanted the latest in theatre innovation ready for new and returning patrons. The stunning picture (right) of the 60 seat theatre is an accurate representation of how intense and exciting this theatre really is.

Secretary General of Cinemovida, Stephan Miché, had this to say about their new MX4D Theatre: “Our audience is thrilled so far with our brand new MX4D theatre and it’s a pleasure for us to see those large smiles in such a pandemic context.”

Thanks to these cinematic trailblazers at CineMovida, the residents of Perpignan will be able to enjoy major box office films in an all new format!

About MediaMation Inc.
For nearly 30 years, MediaMation, Inc. has provided innovative technological solutions to the Cinema and Themed Entertainment and Amusements market and expanded to the esports and VR industry in recent years. MediaMation is an interactive technology company and a worldwide, leading supplier and manufacturer of patented technology for 4D Motion EFX theatres and seats, including its MX4D Motion EFX technology, with over 360 installations worldwide. MediaMation also designs and implements turnkey creative solutions for complex shows, rides, exhibits, fountain shows, etc. for theme parks, zoos, aquariums, museums, cinemas and FECs.

In Europe, Kinepolis Group NV has 58 cinemas spread across Belgium, the Netherlands, France, Spain, Luxembourg, Switzerland and Poland. Since the acquisition of Canadian movie theatre group Landmark Cinemas and American movie theatre group MJR Digital Cinemas, Kinepolis also operates 40 cinemas in Canada and 10 in the US.
In total, Kinepolis Group currently operates 108 cinemas worldwide, with a total of 1,097 screens and almost 200,000 seats. Kinepolis’ employees are all committed to giving millions of visitors an unforgettable movie experience. More information on www.kinepolis.com/corporate.

About CineMovida
CineMovida is a family company passed down from from generation to generation located in Perpignan, France. Jean Font (grandfather of the current president Jacques Font) opened his first theatre in Barcelona, Spain in 1906 and his second one in Perpignan, France in 1911. Since 1906, cinema has been a family tradition for the Font family. In 1964, the Font’s theaters became a company : « SNES » as Société Nouvelle d’Entreprises de Spectacles. CineMovida (the brand of SNES) is one of the twelve biggest independent theaters in France.