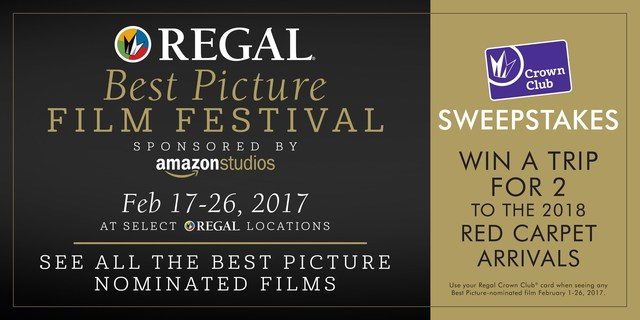 Regal Entertainment Group, a leading motion picture exhibitor owning and operating one of the largest theatre circuits in the United States, announces the Regal Best Picture Film Festival sponsored by Amazon Studios in select theatres Friday, February 17, through Sunday, February 26.  All movies nominated for Best Picture will be available individually during the 10 day film festival as well as a special offer to see all the Best Picture nominees for $35.00. Additionally, Crown Club members who use their card to purchase a ticket for any Oscar-nominated Best Picture film through February 26 will be entered to win a trip for two to the red carpet arrivals at the 90th Oscars in Los Angeles, California.

“Previously movie enthusiasts that wanted to see every Best Picture nominee may have had an option to sit through a marathon viewing to witness the best Hollywood has to offer,” said Ken Thewes, Chief Marketing Officer at Regal Entertainment Group.  “Now, we are excited to deliver a Festival Pass that is a great value and gives the moviegoer the viewing power over which Best Picture film they want to see and when they want to see it.”

The Best Picture Film Festival will take place at select Regal Cinemas where all Oscar-nominated Best Picture films will play starting on Friday, February 17, through Sunday, February 26. Guests will be able to purchase tickets to the individual showtimes or can purchase the Festival Pass for $35, giving them access to all festival showtimes. Festival Passes will be made available later this month at select Regal Cinemas, Atom, Fandango, and movietickets.com.  For participating locations, please visit http://regmovi.es/BestPics.

Regal is also excited to offer members of the Regal Crown Club the opportunity to win a trip for two to experience the red carpet arrivals at the 2018 Oscars with the “Red Carpet Dream Sweepstakes.” Through a promotional partnership with the Academy of Motion Picture Arts and Sciences, Regal is able to offer a grand prize package for two sets of winners’ access to view the red carpet arrivals from fan bleachers at the 90th Academy Awards in 2018. For contest eligibility, Regal Crown Club members need only to see a film nominated for Best Picture through February 26 and to use their Crown Club card at Regal Cinemas. The films nominated for Best Picture will be announced on Tuesday, January 24, and movie fans can tune into the Oscars®, hosted by Jimmy Kimmel, on ABC, February 26 at 7:00 p.m. EST.

“Regal is proud to offer the opportunity to see all of the movies nominated for Best Picture in time for the Academy Awards on Sunday, February 26th.  2016 was an incredible year for movies with some of the most critically acclaimed and audience pleasing movies ever,” said Steve Bunnell, Chief Content Officer at Regal Entertainment Group.  “We are also  excited to offer members of the Crown Club, our industry-leading loyalty program, an opportunity for a once in a lifetime experience to see the biggest stars from the silverscreen walk the red carpet at the 90th Oscars®.”

Regal fans are encouraged to like Regal Cinemas’ Facebook page and download the Regal Movies app. Moviegoers can program their favorite theatre and purchase tickets all from their mobile device. The Regal app also gives patrons the ability to join the Regal Crown Club card straight to their phone for easy access while on-the-go. Through the industry-leading Regal Crown Club, approximately 12-million active members each year accumulate credits at the box office and concession stand to earn rewards including free popcorn, soft drinks and movies. Free membership is also available at the box office or online at http://www.regmovies.com/Crown-Club.

About Regal Entertainment Group:
Regal Entertainment Group (NYSE: RGC) operates one of the largest and most geographically diverse theatre circuits in the United States, consisting of 7,310 screens in 565 theatres in 42 states along with Guam, Saipan, American Samoa and the District of Columbia as of September 30, 2016. The Company operates theatres in 46 of the top 50 U.S. designated market areas. We believe that the size, reach and quality of the Company’s theatre circuit not only provide its patrons with a convenient and enjoyable movie-going experience, but is also an exceptional platform to realize economies of scale in theatre operations.