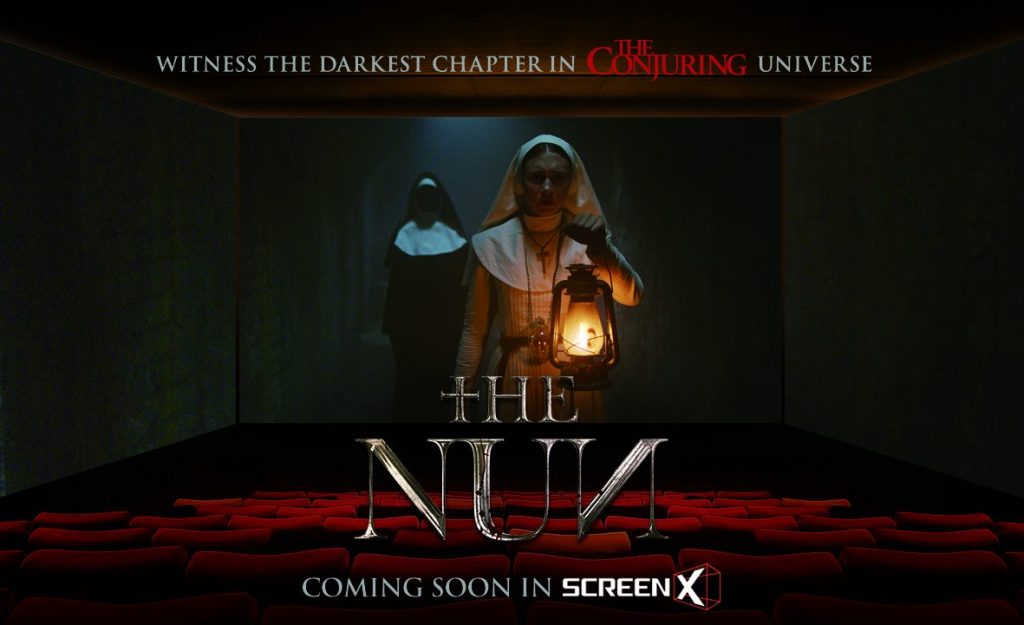 CJ 4DPLEX and Regal announced today that the latest ScreenX locations in the U.S. will open in New York City and San Francisco on Thursday, September 6. The launch will mark the first theatres in each of these cities to feature ScreenX, the premium, panoramic, 270-degree cinema environment that projects films on three walls of the auditorium. With these openings, ScreenX is to expand its domestic presence to seven locations.

The new ScreenX installations will be located at Regal Union Square Stadium 14 in New York City and Regal Hacienda Crossings Stadium 20 in San Francisco. Both theatres are part of the previously announced major expansion plan with the Cineworld Group and its subsidiaries, which include Regal, to bring 100 ScreenX screens locations to the U.S. and Europe in the coming years.

The latest ScreenX openings bring the total global footprint to 154, in 12 countries. Worldwide the number of ScreenX theatres has increased exponentially, with auditoriums opening in Western Europe for the first time and with additional locations to launch across China, Japan, Korea, Southeast Asia, France, Turkey and the Middle East by the end of 2018.

“We have seen a great expansion of our 4DX cinema technology, and are beyond thrilled to see ScreenX following in its path. Cineworld and Regal have been excellent partners that have shown us great support and understand our vision to push the limits of what is possible inside of a movie theatre auditorium. It is an exciting time as we launch two simultaneous openings with ‘The Nun’ being the first Hollywood horror film to be screened in the format. It will be quite a visceral, stunning experience,” said Brandon Choi, CEO of CJ 4DPLEX America.

“After the successful opening at our Edwards Irvine Spectrum theatre in Southern California, we are excited about the opportunity to bring more ScreenX theatres to New York and San Francisco,” said Ken Thewes, CMO at Regal. “We’re always looking for innovative technologies to engage our audiences and ScreenX offers a new level of excitement for our guests to experience movies in an incredible immersive new way.”

The release of The Nun in ScreenX is part of a larger agreement with Warner Bros. to release several films in the immersive format, following the previously released The Meg and Rampage, and including the much-anticipated Aquaman and Shazam!.

ScreenX is the world’s first multi-projection theatre technology designed to enhance the moviegoing experience. ScreenX allows the audience to go beyond the frame of the traditional movie screen, utilizing a proprietary system to expand select scenes of feature films and pre-show advertising to the left and right walls.

New Line Cinema’s horror thriller The Nun explores another dark corner of the “Conjuring” universe, whose record-setting films have terrified audiences around the globe.

The new fright-fest, directed by Corin Hardy (The Hallow) and produced by James Wan, and Peter Safran, the latter of whom has produced all the films in The Conjuring franchise, delves into the shocking origin of the demonic Nun Valak, who first made her evil presence known in The Conjuring 2.

When a young nun at a cloistered abbey in Romania takes her own life, a priest with a haunted past and a novitiate on the threshold of her final vows are sent by the Vatican to investigate. Together they uncover the order’s unholy secret. Risking not only their lives but their faith and their very souls, they confront a malevolent force in the form of the same demonic nun that first terrorized audiences in The Conjuring 2, as the abbey becomes a horrific battleground between the living and the damned. The Nun stars Oscar nominated Demian Bichir (A Better Life) as Father Burke, Taissa Farmiga (TV’s American Horror Story) as Sister Irene, and Jonas Bloquet (Elle) as local villager Frenchie. The cast also includes Charlotte Hope (TV’s Game of Thrones) as the abbey’s Sister Victoria, Ingrid Bisu (Toni Erdmann) as Sister Oana, and Bonnie Aarons, reprising her Conjuring 2 role as the title character.

New Line Cinema presents an Atomic Monster / Safran Company production, The Nun. Opening in theaters beginning September 7, 2018, the film will be distributed by Warner Bros. Pictures. This film has been rated R for terror, violence, and disturbing/bloody images. thenunmovie.com

Regal, a subsidiary of the Cineworld Group, operates one of the largest and most geographically diverse theatre circuits in the United States, consisting of 7,305 screens in 557 theatres in 43 states along with Guam, Saipan, American Samoa and the District of Columbia, as of July 31, 2018. We believe that the size, reach and quality of the Company’s theatre circuit provides its patrons with a convenient and enjoyable movie-going experience. We are committed to being “The Best Place to Watch a Movie!”

ScreenX is the world’s first multi-projection system designed to enhance the cinematic immersiveness of the theater setting. It was created in 2012 by CJ CGV, part of South Korean conglomerate CJ Group, as one of the company’s industry-changing “next cinema formats,” alongside 4DX, the global leader in multisensory cinema technology with motion and environmental effects. ScreenX allows moviegoers to experience beyond the frame of the movie screen by utilizing a proprietary system that expands images of feature films and pre-show advertising to create an immersive, panoramic, 270-degree format that projects onto three walls of theaters. As of September, ScreenX has been installed in 154 screens around the world, including 84 screens in South Korea; 46 screens inChina; 7 in the United States; 2 in England; 4 in Turkey; 3 in Switzerland; 2 in France; 2 in Vietnam, and 1 in UAE, Thailand, Japan, and Indonesia.