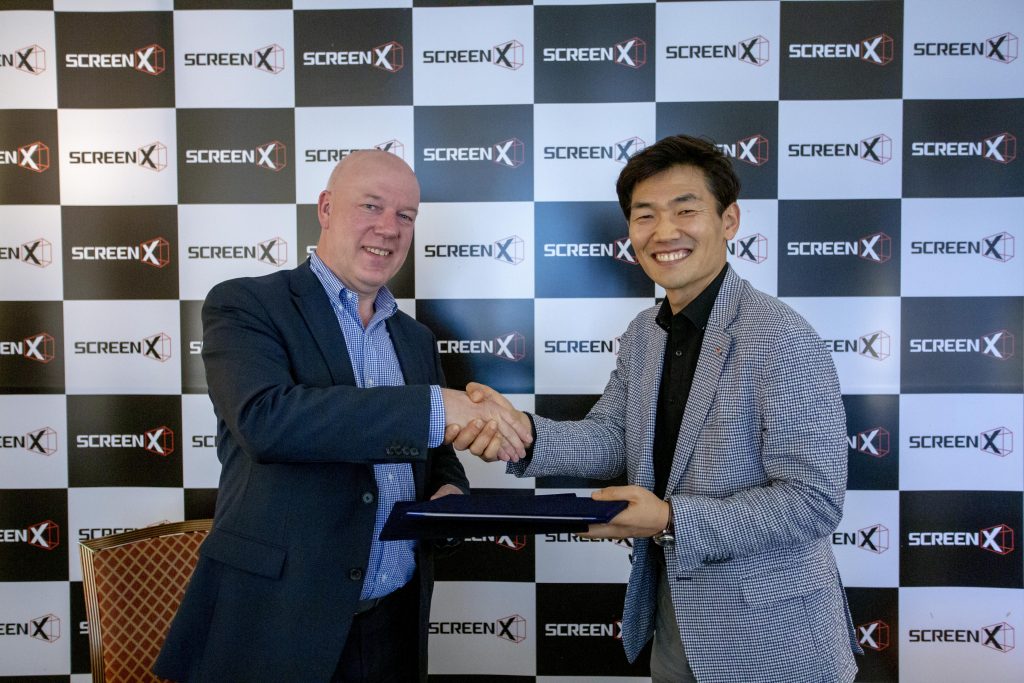 Kinepolis has signed a deal with CJ 4DPLEX, the world’s leading cinema technology company, to open ScreenX theatres starting 2019. ScreenX is the world’s first multi-projection theatre technology designed to enhance the movie-going experience. ScreenX allows the audience to go beyond the frame of the traditional movie screen, utilizing a proprietary system.

“We are very pleased today to be signing a new deal to expand ScreenX to 6 new theaters with our partner Kinepolis” said JongRyul Kim, CEO of CJ 4DPLEX. “We are incredibly happy to be working with such a great new partner in revolutionizing the cinematic landscape and we look forward to developing a long-lasting partnership with them in the years to come.”

“We have always taken pride in our partnerships and this opportunity with CJ 4DPLEX will strengthen our pursuit of ‘the ultimate movie experience’ with the addition of 6 ScreenX auditoriums in our theaters”, said Eddy Duquenne, CEO of Kinepolis. “We are excited to bring next-level movie-going experiences for our customers and together with CJ 4DPLEX we will continue to break boundaries in delivering these experiences.”

In total, Kinepolis Group currently operates 98 cinemas (45 of which it owns) worldwide, with a total of 886 screens and more than 175,000 seats. Including the acquired Canadian organization, Kinepolis employs 3,800 people, all committed to giving millions of visitors an unforgettable movie experience.

About ScreenX
ScreenX is the world’s first multi-projection theater technology used within a theatre setting, marking it as the most visually immersive theater experience of CJ 4DPLEX. ScreenX allows moviegoers to go beyond the frame of the movie screen by utilizing a proprietary system that expands images of feature films and pre-show advertising to the left and right walls of the theatre, creating an immersive, panoramic, 270-degree viewing experience. To date, ScreenX has been installed in 203 screens around the world, including 87 screens in South Korea; 66 screens in China; 17 in the United States; 9 in England; 4 in Turkey; 4 in Japan; 3 in Switzerland; 2 in France; 2 in Vietnam and 1 in Spain, Hungary, UAE, Kuwait, Thailand, Indonesia, Israel, Canada, and Poland. ScreenX was recognized as the “Innovator of the Year” at ShowEast 2018.