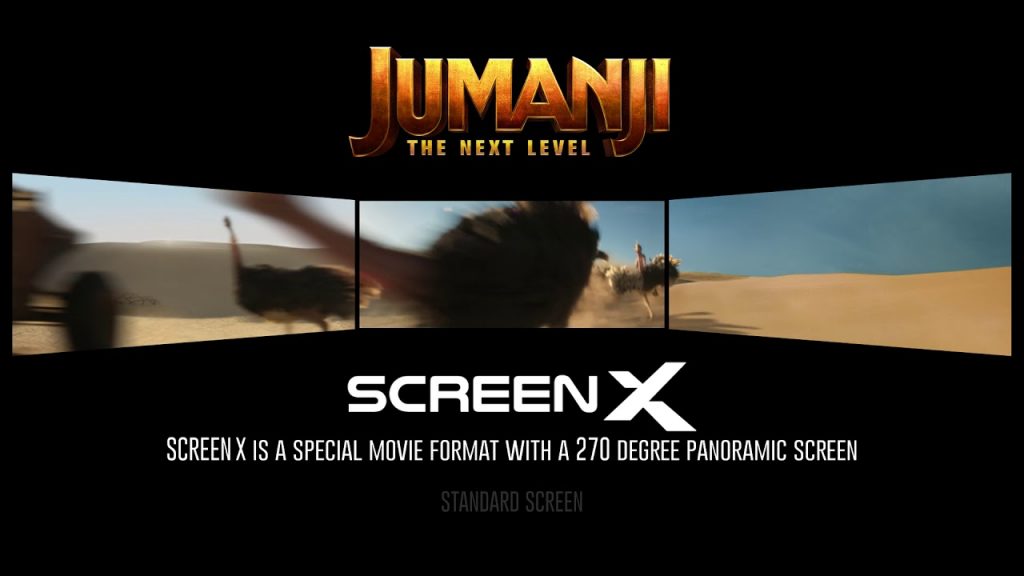 Tickets for Jumanji: The Next Level in 4DX and ScreenX will be available on all major ticketing sites on [December 3, 2019]

CJ 4DPLEX (www.cj4dx.com), one of the world’s leading cinema technology company, and Sony Pictures Entertainment (“Sony Pictures”), today announced the release of “Jumanji: The Next Level” in the multi-sensory, motion synchronized seats of 4DX and in the 270-degree panoramic screens of ScreenX, starting December 4, 2019 in certain markets. The film opens in North American theaters nationwide on December 13.

“Jumanji: The Next Level” in 4DX will feature motion seating and environmental effects ranging from wind, rain, fog, scents, lighting and more that will intensify all the high-stakes moments of the film inside the theater. Audiences will enter the world of Jumanji: The Next Level with a flash of lightning, fog and pitching of the motion seats, transporting audiences, along with the characters, into the action. In 4DX, the film will be releasing on 720 screens worldwide, including 28 screens in the U.S. with Regal Cinemas, Cinepolis, Marcus Theatres and CGV Cinemas.

“Jumanji: The Next Level” in ScreenX will offer an extended viewing experience of the film, expanding major action sequences and exotic locales, from the desert to the jungle and the arctic, onto the left and right side walls of the auditorium. As mandrills and stampeding ostriches careen across the side screens surrounding the auditorium, audiences will be taken deeper into the world of Jumanji: The Next Level for a visually enhanced cinematic experience. In ScreenX, the film will be releasing on 240 screens worldwide, including 32 screens in the U.S. with Regal Cinemas, B&B Theatres and CGV Cinemas.

“We are thrilled to be expanding our collaboration with Sony Pictures to offer audiences additional unique ways to experience the film this December,” said Jong Ryul Kim, CEO of CJ 4DPLEX. “We believe 4DX and ScreenX offer audiences an incredible view of all the fantastic action sequences.”

“We are excited to be offering global audiences ‘Jumanji: The Next Level’ in two uniquely immersive viewing experiences, 4DX and ScreenX, both of which add to the overall adventure and excitement in the film,” said Scott Sherr, EVP, WW Theatrical Distribution of Sony Pictures Motion Picture Group. “4DX will be a great addition to the thrilling action scenes of ‘Jumanji: The Next Level’ and in ScreenX, the film will be enhanced by expanded visuals stretching onto the sides of the auditorium.”

Past collaborations between CJ 4DPLEX and Sony Pictures’ include the successful worldwide releases of “Spider-Man: Far From Home” in both 4DX and ScreenX formats, marking the first-ever collaboration between ScreenX and Sony Pictures. In 4DX, the two companies released “Zombieland: Double Tap”, “The Angry Birds Movie 2” and “Men in Black™: International” worldwide this year.