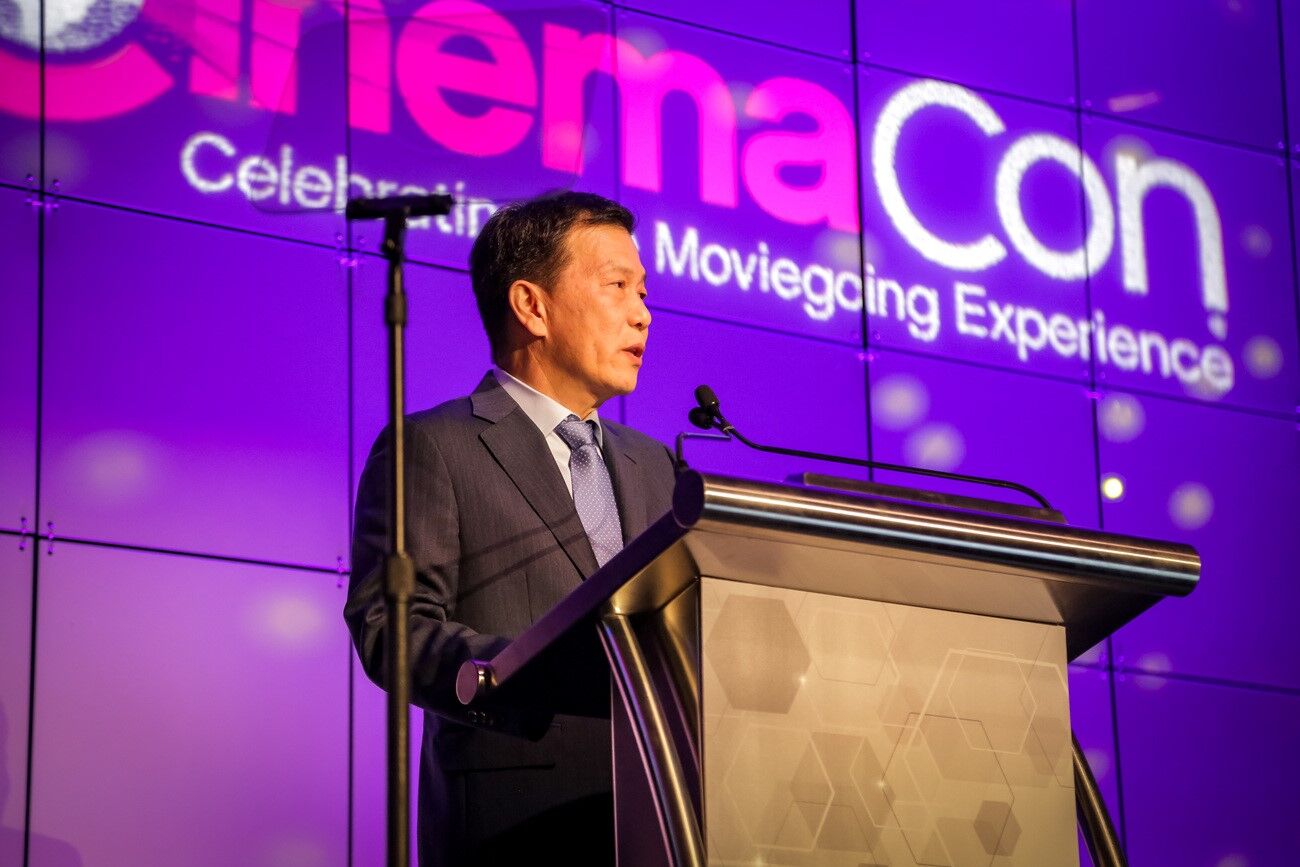 Message Delivered During Keynote Presentation at CinemaCon 2018 in Las Vegas

Las Vegas, NV (April 24, 2018) – On stage at CinemaCon 2018, the CEO of CJ CGV, Jung Seo, delivered a clear outline to how the fifth largest exhibitor in the world is being proactive to counter industry wide challenges – through the company’s concept of “Cultureplex.”

Delving into more detail, Mr. Seo said, “Several years ago we decided to re-define ourselves from being a multiplex to being a ‘Cultureplex.’ For us, being a ’Cultureplex’ means to be a cultural playground, where people can gather to experience all different types of culture from film, music, performances, games, food, drinks and so on.”

To satisfy moviegoers’ desire for a variety of options, CGV is striving to provide a platform for its customers that goes beyond just watching a movie. Elaborating on how CGV is not just a place to watch movies, Mr. Seo said, “If that’s how we define ourselves, then we will constantly be under the threat of being replaced by other channels for watching movies or other forms of entertainment. But rather, the value of CGV is to provide our customers the most attractive ’place’ in which to have a communal social experience.”

Some of the concepts that can be found at CGV locations around the world include Cine de Chef, a dinner and a movie experience; Cine Shop, a store in collaboration with movie studios; La Masion, a theatre lounge with movie-themed cocktails; Tempur Cinema, the world’s first theater equipped with reclining  beds that make customers feel like they are watching at home; Sky Box, giving moviegoers an opera house balcony feel; V-Busters, the company’s in-lobby game zone with virtual reality (VR); and Open Studio, a recording studio; among others.  Most recently, 4DX with ScreenX, the latest innovation in cinema technology combining motion chairs and environmental effects with a 270-degree panoramic viewing experience, was launched and is being demoed for the first time in the U.S. at the CJ 4DPLEX CinemaCon space in Roman Ballroom II.

CJ CGV is committed to the concept of “Cultureplex” and is assessing all of its locations to see how “Cultureplex” can best be implemented. For example, the company’s first multiplex in South Korea, CGV Gangbyeon, which opened in 1998, had three million visitors in the first year, paving the way for Korea to become one of the biggest film markets in the world. Now almost 20 years later, attendance has dropped to 1.2 million visitors per year, which mirrors the industry around the world. Mr. Seo spoke on stage about how this location is now getting a major facelift with all of the upgrades having “Cultureplex” in mind.

The CinemaCon presentation by Jung Seo, CJ CGV comes as the exhibitor currently attracting more than 100 million visitors a year in South Korea alone, with the country’s visitors averaging 4.3 movies per year.

About CJ CGV
CJ CGV introduced a multiplex theater for the first time in 1998 and created the movie-watching trend in Korea. CJ CGV is the largest multiplex cinema chain in South Korea, and the world’s Top 5 cinema exhibition company present in China, Vietnam, Indonesia, Myanmar, Turkey and the United States.  Under the theme of ‘Cultureplex’, CJ CGV has continued developing special theaters like  ‘4DX(moving chairs and wind, rain, fog and scent effects etc.)’, ‘ScreenX(a 270-degree screening format that projects images on the side walls of a theater, as well as the front screen)’ and lobby entertainment like ‘lolol(cartoon cafe)’, ‘V BUSTERS(VR entertainment)’.   ‘Cultureplex’ is a concept of complex cultural space combining spectacles, entertainment and dinning in theaters. CJ CGV is currently operating 3,442 screens at 459 theaters in seven countries around the world including 1,116 screens at 150 theaters in Korea.