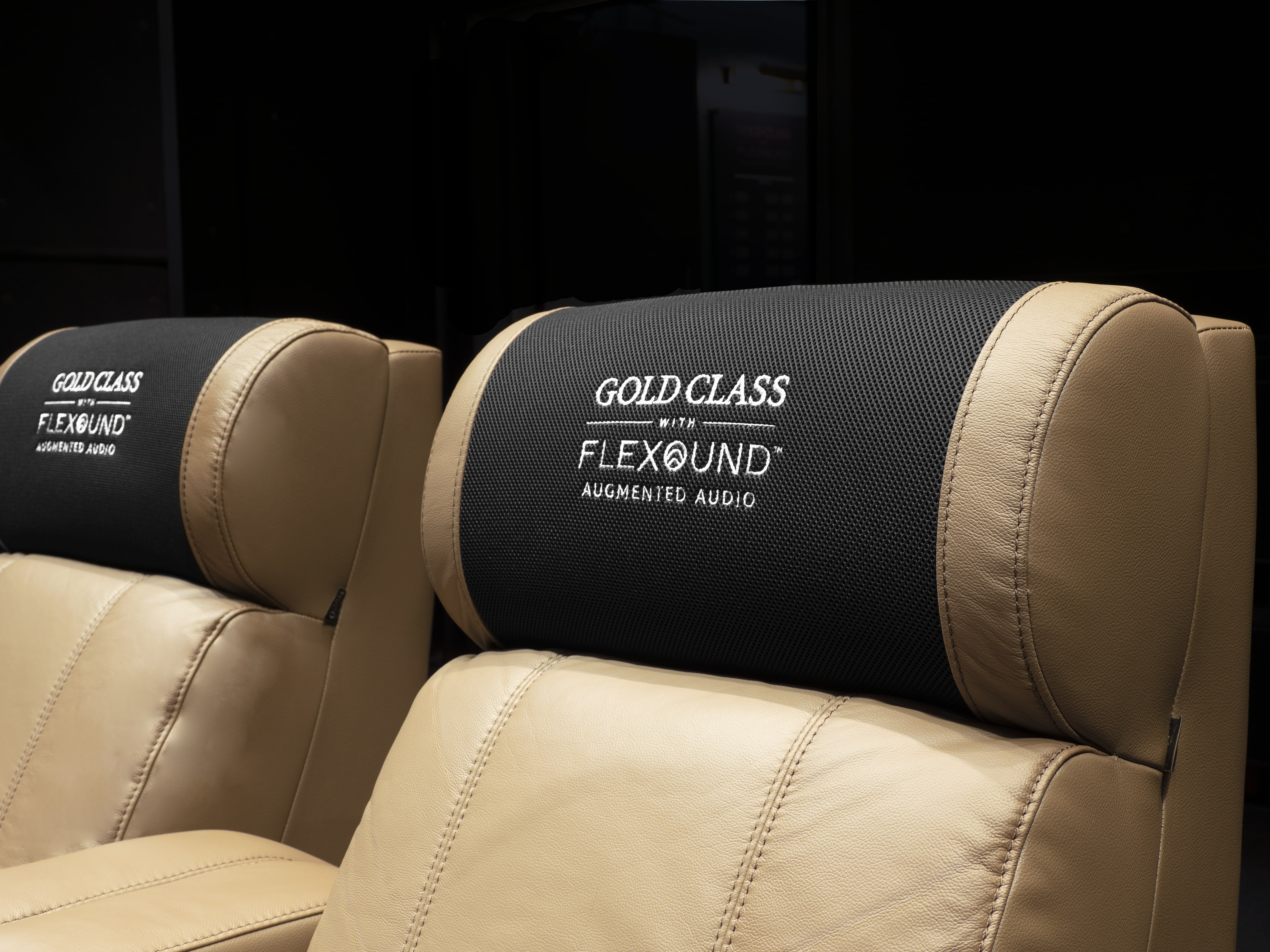 Gold Class Wangsimni, CJ CGV’s premium theatre, reopened on August 30, is the second screen in the world with audio enhancements in every seat. The first commercial cinema with FLEXOUND Augmented Audio™ has been immersing customers since February 2019 in Finland.

CJ 4DPLEX, which is known for 4DX and ScreenX systems, developed this new collaboration between CJ CGV and FLEXOUND for the ultimate Sound Solution into the cinemas.

CJ 4DPLEX and FLEXOUND are in talks to expand the collaboration in more CJ CGV theatres, as well as incorporating FLEXOUND Augmented Audio™ with 4DX® and ScreenX® systems.

FLEXOUND Augmented Audio for cinemas complements all current sound systems. The technology offers equal sound quality in every seat independent of seat location. It improves the clarity of dialogue and lower-pitched tone in a theatre. FLEXOUND requires no wearable accessories.
“We give cinema operators a high value competitive advantage over in-home-entertainment. No remix or recode work is needed as our technology complements all existing surround systems”, FLEXOUND CEO, Mervi Heinaro adds.

“Our technology is universal and can be used for a wide range of seats. Low maintenance and a long life-span are a given. We cover the whole audio range and the vibration with one Flexound module per seat”, says FLEXOUND Chief of Cinema, Mika Oesch.

The seats for CJ CGV’s Gold Class Wangsimni are developed together with Ferco Seating, a renowned seat manufacturer, who have gained FLEXOUND certification for three of their models, Premium Verona, Premium Milano and the Opus seats. FLEXOUND also has their own Finland-produced model available and other manufactures and models will be announced soon.

FLEXOUND Augmented Audio is designed and engineered in Finland. The multinational team started the work in 2015 to help autistic children by adding the sensation of touch to music. Now the versatile, globally unique, and patented technology can be embedded into cinema, airplane or car seats, gaming chairs, cushions, furniture and more. FLEXOUND is a member of the International Cinema Technology Association.

CJ 4DPLEX is a leading, next-generation cinema technology company, headquartered in Seoul with international offices in Los Angeles and Beijing. The company has created innovative film technologies for theaters worldwide that include ‘4DX’, ‘ScreenX’ and ‘4DX with ScreenX’ for consumers to experience films in ways that were never before possible.

CJ CGVis the largest multiplex cinema chain in South Korea, and the world’s 5th largest company present in China, Turkey, Vietnam, Indonesia, Myanmar and the United States. As of August 2019, CJ CGV is operating over 3,900 screens at 540 locations in seven countries around the world. CJ CGV has continued developing special theaters like ‘4DX’, ‘ScreenX’, ‘’Goldclass’. Now, the company has a vision of introducing and developing ‘Cultureplex’ – a culture playground where people can experience all different types of cultures including films, music, performances, games, sports, food, drinks and so on – beyond the multiplex.

Ferco Seating established in the year 1983, Ferco Seating has evolved throughout the years into one of the world’s largest manufacturers of public seating. Headquartered in the UK, with well-connected international footprints around the globe; Ferco has a wide range of experience when it comes to understanding the challenges faced in the cinema industry.