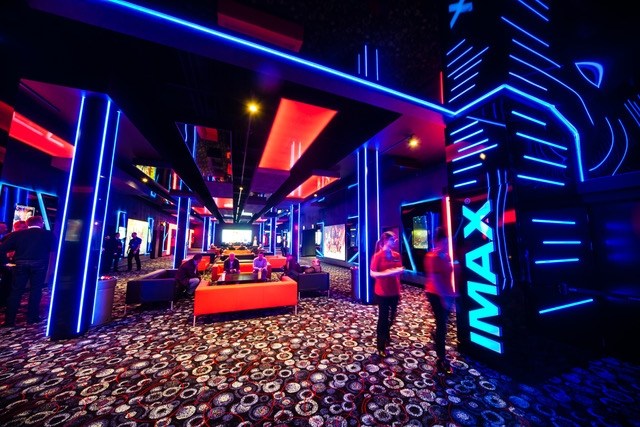 IMAX Corporation and Cineworld Group PLC, including its Regal Entertainment Group subsidiary, today announced a binding letter of intent to install IMAX’s new ground-breaking laser experience for commercial multiplexes in 55 of the exhibitor’s locations across the U.S. and Europe. The announcement coincides with the launch of the next-generation of IMAX with Laser, the Company’s most advanced commercial projection system to date designed to transform the premium blockbuster moviegoing experience.

Under the agreement, the companies will be adding IMAX with Laser systems to 26 new IMAX® theatres and upgrading 29 of its existing IMAX sites, including 15 currently open and 14 sites in backlog. The IMAX with Laser systems will include renewed 12-year lease terms and are expected to be installed between 2018 and 2022. The specific sites and mix of deal types will be agreed by the companies.

Additionally, Cineworld and Regal will be undertaking a complete renovation of the 55 locations and add several additional moviegoing enhancements including the installation of IMAX’s 12-channel immersive sound, luxury plush rocker seating, redesigned entryways and in-theatre branding.

“For over 20 years, Cineworld has been a major proponent of The IMAX Experience and its ability to attract and immerse audiences. We’re encouraged to see that support continue with its acquisition of Regal through this significant endorsement of the new IMAX with Laser experience and its ability to deliver audiences increased differentiation that they can only get with IMAX,” said IMAX CEO Richard L. Gelfond. “In addition to the economics of the new laser system remaining attractive and coming with 12-year lease extensions, we believe this powerful new product will over time help ensure that IMAX remains the premium cinematic experience of choice among moviegoers, studios, filmmakers and theatre partners alike.”

“There is no doubt in my mind that IMAX with Laser provides the best blockbuster moviegoing experience and will be our leading premium offering,” said Mooky Greidinger, CEO of Cineworld Group PLC. “IMAX and our collective organization have worked together for more than 20 years and we both understand how to create best-in-class customer experiences. For us, this agreement is about continuing that legacy and introducing a new era of IMAX moviegoing.”

IMAX with Laser provides audiences with strikingly crystal-clear and vivid images to suspend disbelief when experiencing today’s biggest blockbusters. The next-generation 4K laser projection system features a new optical engine and suite of proprietary IMAX technologies that delivers increased resolution, sharper and brighter images, deeper contrast as well as the widest range of colors available to filmmakers to present more distinct, exotic colors than ever before. The new system will also feature IMAX’s 12-channel sound technology that incorporates new side and overheard channels to deliver greater dynamic range and precision for ultimate audio immersion and sound you can feel.

To date, the Company has signed agreements for more than 150 of its new IMAX with Laser systems worldwide.

About Cineworld Group
Cineworld Group was founded in 1995 with its roots going back to 1930 through the combination with Cinema City in 2014. In December 2017, Cineworld acquired US cinema chain Regal Entertainment Group. Following completion of the deal in February 2018, the enlarged Group became the second largest cinema chain in the world, with 9,538 screens across the US and Europe. Cineworld is operating cinemas today in ten countries:  the US, the UK, Ireland, Poland, Romania, Israel, Hungary, Czech, Bulgaria and Slovakia, covering a market of approximately 500 million people. The acquisition of Regal provides Cineworld with a major presence in the US cinema market, the largest box office market in the world. Cineworld’s primary brands are Regal (in the US), Cineworld and Picturehouse (in the UK & Ireland), Cinema City (throughout Europe) and Yes Planet (throughout Israel).  We believe that the size, reach and quality of Cineworld’s theatre circuit provides its patrons with a convenient and enjoyable movie-going experience. We are committed to being ‘The Best Place to Watch a Movie!’ More information can be found at www.cineworld.com