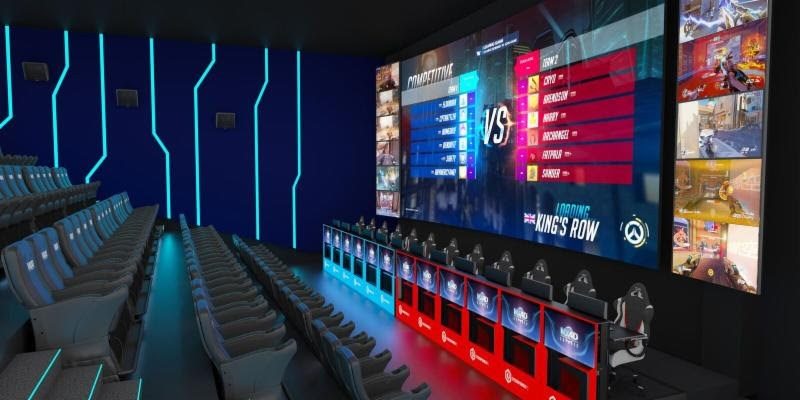 MMI is breaking boundaries with Flying Theaters, interactive motion based virtual reality and ESports for Attractions

MMI is on the forefront of technology at this year’s conference with three cutting edge products: A Flying Theatre, two new REACTIVr games, and a turnkey ESports theatre for parks, casinos and FECs.

MMI’s MX4D Flying EFX Theatre is a new take on an industry favorite. The company’s four-seat bench glides forward to allow rider’s feet to perilously dangle over the edge. MX4D Motion EFX technology combined with the state-of-the-art projection and sound immerse fliers in an experience unparalleled in the industry. The Full Dome Pro screen will surround riders with the edge-of-your-seat excitement of Alpha Flight, the latest film from Super 78.

The silent, air-driven, pneumatic system offers a thrilling experience that moves beyond the standard flying theatre with the company’s full range of motion and effects. Utilizing its more than 25 years of growing technology, MMI has been entertaining guests in over 30,000 seats worldwide.

“We wanted to approach our version of the flying theatre with cost, simplicity and safety in mind,” says Dan Jamele, CEO of MMI. “As opposed to needing complicated mechanisms to lift riders or tilt a platform, our unique system packs a punch in the smallest possible space.”

In addition to the theatre, MMI will expand its popular REACTIVr line by teaming with three cutting edge tech companies: HTC Vive, and Viveport Arcade Manager, Skydance Interactive, and Rogue Initiative. “Teaming up with MMI has allowed us to bring our games into a new dimension,” says Pete Blumel, CEO and Creative Director of Rogue. “Utilizing their MX4D bench and EFX, player’s smell, see and feel the virtual world around them as they fight for the highest score.”

Archangel is an award-winning Virtual Reality game from Skydance Interactive. This visceral, action-packed game puts players in the cockpit of a six-story mech and is the perfect fit for the MX4D bench system.

The final product in MMI’s booth will be the debut of MMI’s MX4D ESports Motion EFX Theatre for attractions. “Stow and Go” versatile gaming stations combined with a MediaMation MX4D theatre create a unique way to raise attendance and revenue within any existing venue. “ESports worldwide revenue is expected to reach $1.5 billion! We want to help parks capitalize on the growing trend,” says Jamele.

About Skydance Interactive
Skydance Interactive creates and publishes original and IP-based virtual reality, PC, and console games. This division of Skydance Media was launched in 2016 through the acquisition of The Workshop, whose prior credits include genre-defining work on “Gears of War 4” “XCOM 2” and “Borderlands 2” among others. Skydance Interactive’s first VR game is Archangel, launched on July 18th 2017. The studio is located in Marina del Rey, CA.

The studio is led by award-winning industry veterans, including alumni from Amblin Entertainment, Disney, Dreamworks Animation, Sony Pictures Entertainment, Warner Bros and Activision with headquarters in Los Angeles and teams in Hong Kong and mainland China.

About HTC Vive
VIVE is a first-of-its-kind virtual reality platform, built an optimized for room-scale VR and true-to-life interactions. Delivering on the promise of VR with game-changing technology and best-in-class content, VIVE has created the strongest ecosystem for VR hardware and software, bringing VR to consumers, developers and enterprises alike. The VIVE ecosystem is built around the best VR hardware in market, supported by VIVE X, a $100 million accelerator for VR and related technology start-ups, Viveport, a global platform and app store for VR that operates in more than 30 countries, and VIVE Studios, its VR content development and publishing initiative.

About FullDome Pro
Founded in 2010, with the goal of introducing easy-to-use and cost-effective digital technology, and dynamic programming to the planetarium industry, Fulldome Pro has emerged as a global leader in the development of the immersive dome marketplace.

The development of our revolutionary patented hardware and software integration and auto-calibration technologies allow for fast, efficient and highly reliable project production and set up. Headquartered in Los Angeles, USA Fulldome.pro has and over 200 employees with regional offices in Thailand, China, India, Brazil and Russia. Today we have partnered on nearly 300 projects worldwide. From the creation of pioneering new design concepts, to redesigns and upgrades of existing facilities-one-off shows to permanent installations—revolutionary planetarium systems to immersive digital art – Fulldome is the only immersive media production company that can do it all.

About Super 78
From the creation of captivating media to the design of enriched, immersive spaces, Super 78builds worlds, both real and virtual, that are unforgettable.

Super 78 is a group of award-winning artists and technicians who deliver entertaining and educational stories across all platforms. Currently celebrating its 20th anniversary, this creative, production and special venue company extends well-known brands and intellectual properties into global destinations and the experiential marketplace.

With offices in Los Angeles and partners worldwide, Super 78 continues to expand by creating, producing and owning live action, animated and graphic content for the global market.

About MediaMation, Inc.
For over 25 years, MediaMation, Inc. has provided innovative technological solutions to the Cinema and Themed Entertainment market and has expanded to the ESports industry in 2017. MediaMation is an interactive technology company and a worldwide, leading supplier and manufacturer of patented technology for 4D/5D Motion EFX theaters and seats, including its MX4D Motion EFX technology, with over 200 installations worldwide. MediaMation also designs and implements turnkey creative solutions for complex shows, rides, exhibits, fountain shows, etc. for theme parks, zoos, aquariums, museums, cinemas and FECs.