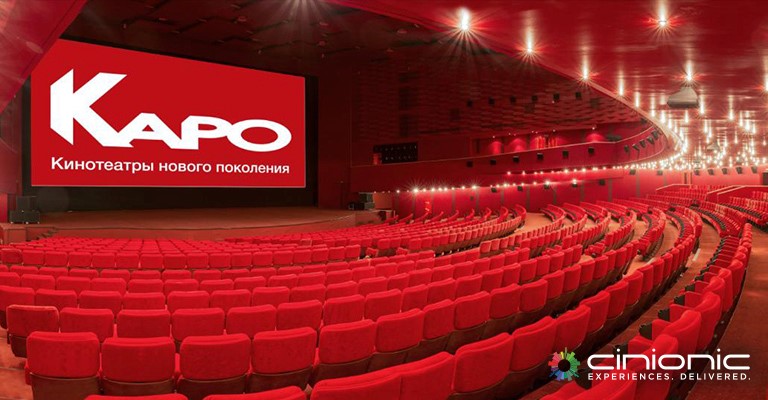 The Barco DP4K-60L Flagship model is the pinnacle of laser projection, providing the high brightness, color gamut and quality that movie studios and distributors demand when showcasing their films. Upgrading the premiere auditorium in the ‘K?R? 11 October’ cinema to laser exemplifies KARO’s ongoing commitment to, and investment in, Russia’s rapidly growing cinema industry.

This announcement is the latest from a longstanding relationship between Cinionic and KARO, built on a mutual dedication to providing an unparalleled moviegoing experience. More than half of digital projectors installed in Russia today are from Barco, reflecting the strength of Cinionic’s leading portfolio.

“Russia’s robust box office during this time is testament to the moviegoer’s affinity for cinema,” added Wim Buyens, CEO, Cinionic. “The forward-thinking approach of exhibitors like KARO ensures audiences have exceptional cinema opportunities for years to come. As the leader in laser cinema, Cinionic continues to support theaters around the world with advanced services and innovative solutions to enable elevated entertainment experiences.”

Located in the center of the capital of Russia, Noviy Arbat Street, October is one of the largest multiplexes in the country, with over 3,000 seats across 11 halls. With enhanced disinfecting measures and social distancing precautions in place, KARO cinemas reopened to the public in August 2020 and box office numbers approached pre-shutdown averages for the market.

The KARO cinema chain, which was founded in 1997, has set a new standard for the theatrical exhibition industry in Russia. Today KARO is one of the leading, and most technologically advanced cinema chains in the country with 32 modern cinemas and 262 screens in Moscow, the Moscow region, Saint Petersburg, Yekaterinburg, Samara, Kazan, Kaliningrad, Tyumen and Surgut, KARO operates five of Russia’s top ten highest grossing cinemas to include the number one and number two cinemas, KARO Sky 17 at AviaPark and KARO Vegas 22.

KARO cinemas are visited by over 12 million people annually. In addition, KARO leads the Russian cinema sector in online engagement. In 2017 KARO was named by international Convention “CineEurope” as the best European cinema circuit, chosen from among 18 other cinema chains from 37 countries. Since 2012, the major and controlling owner of KARO is a consortium of investors consisting of UFG Private Equity, the Russian Direct Investment Fund (RDIF) and Paul Heth, a filmed entertainment entrepreneur, known as a visionary leader and pioneer in the modern Russian cinema industry. For more information, visit: https://karofilm.ru/