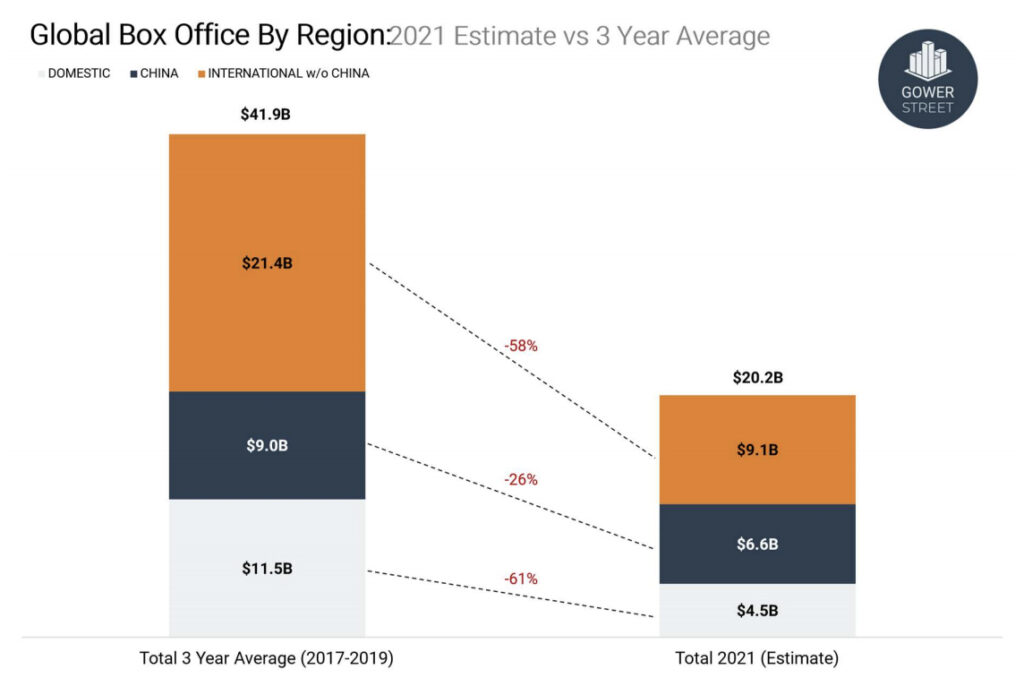 Gower Street Analytics is predicting the global box office to reach USD $20.2 billion in 2021. The London-based global film tech company, which specialises in predictive box office for the distribution and exhibition sectors via its FORECAST service, calculated the end-of-year estimate following its assessment that global box office had matched year-end 2020 results by the close of August in 2021.

Gower Street currently estimates that the International box office (excluding China) will finish at approximately USD $9.05 billion. This will be made up of USD $4.3 billion from Europe, Middle East and Africa (EMEA), USD $3.85 billion from Asia Pacific (excluding China), and USD $900 million from Latin America. Predicted totals for the Domestic and China markets, as well as how they and the International prediction differ from the three-year average, are shown in the graphic above.

The final four months of 2020 generated approximately $4.4 billion globally despite significant portions of the global exhibition sector being closed. At the start of September 2020, 75% of movie theaters by market share were operating. This had fallen to 56% by the close of the year. As of September 11 2021, just under 88% of global cinemas, as measured by pre-pandemic market share, are operating – equalling the pandemic-era peak last recorded on July 31.

Gower Street’s new year-end calculation combines global box office actuals, provided by our partners at Comscore Movies, with monthly forward-projections by market based on our predictive box office service FORECAST and analyst assessment. All projection figures are based on the current release calendar.

Revised global and regional year-end estimates for 2021 will be announced each month.