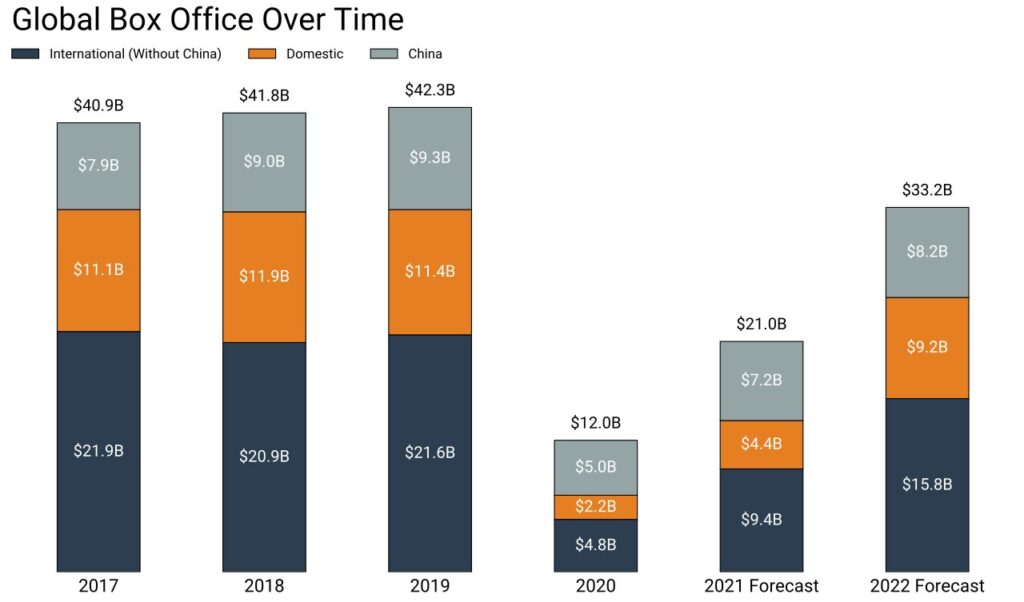 With 2021 just a couple of weeks and a few blockbusters short of the finishing line, Gower Street decided to take a look ahead to what’s on the horizon for next year. After a much stronger box office year with exhibitors, distributors and audiences becoming more comfortable in a Covid-world can we expect even better things in 2022? Will business be back to pre-pandemic norms?

Gower Street’s first Global Box Office prediction for 2022 suggests a significant improvement over 2021. The $33.2 billion projection would represent a 58% gain over the current year if 2021 remains on course for an approximate $21 billion global box office (Gower Street measures it stood at $19.2 billion as of December 11, with several major titles, including this week’s “Spider-Man: No Way Home” still to come). 2021 has itself seen a major (approximately 75%) increase over 2020.

This projection, calculated utilizing data from Gower Street’s flagship FORECAST service and analyst assessment, is based on the current release calendar. It should be noted that this is a very early prediction and Gower Street would expect to see further changes to the release calendar, including additional title announcements, result in some fluctuation. It also currently assumes a largely open marketplace, avoiding additional shutdowns.

If the projection holds it would suggest the industry will need to wait until at least 2023 to see a full return to pre-pandemic global box office levels of over $40 billion. Our 2022 forecast is still 20% behind the average of the three pre-pandemic years (2017-2019) – see graph above.

The Domestic, Chinese and International markets are all projected to see improvement. However, the most notable gain is expected to be seen in the Domestic market, which is projected to regain its pre-pandemic position as the #1 global box office market in 2022, having been overtaken by China in both 2020 and 2021. Of course, with a lesser known advance release calendar and with uncertainty following the lack of release for many recent major Hollywood titles, China is arguably the market that is hardest to predict.