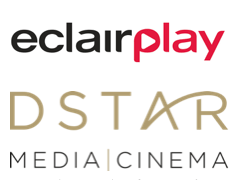 Eclair, a leader in content services for the motion picture and television industries, is pleased to announce an exclusive partnership with Sydney-based Shooting Star Company Group (SSCG) to deploy EclairPlay, the new all-in-one e-delivery and download platform, among cinema exhibitors in SSCG’s DStar Cinema network in Australia and New Zealand

EclairPlay is designed to connect cinema exhibitors and content owners around the globe. The technology provides content owners with an efficient and cost-effective solution to deliver DCPs to cinemas and gives exhibitors access to content (feature films, alternative content, shorts, ads, trailers) available for download and projection as well as to all tools and content marketing material necessary for successful programming and audience building.

“We are thrilled to partner with the established and highly-respected Shooting Star Company Group, a leader in cinema advertising, broadcast services and distribution in the Oceania region, for the implementation of EclairPlay in Australia and New Zealand, one of the most exciting markets today,” explains Pascal Mogavero, Senior Vice President, Eclair. “This new venture follows the successful launch of our innovative DCP delivery platform via broadband in the US, France and Spain. By sharing a common distribution solution across three English-speaking territories – the US, Australia & New Zealand – we will be introducing a truly international approach to digital cinema at the cutting edge of innovation.”

For Peter Skillman, Director and CEO of Shooting Star Company Group, “This strategic partnership with Eclair advances our long-term plans to revolutionise our digital distribution solution for short-form trailer and advertising content, and long-form content, to cinemas throughout Australia and New Zealand. Having already worked closely with Eclair throughout the UK and Europe via our CinemaLive division, I’m confident that with their stellar technology and innovative business models, and DStar Cinema’s established relationships and decades of industry experience, we will offer both distributors and cinemas a superior service. From a customer perspective, EclairPlay is a game-changer – streamlined, easy-to-use, safe, quick and centralised. Clients love the system, which gives them full control over the distribution of their assets. Cinemas have totally embraced the efficiency and ease of the network.”

For Barry Rebo, Managing Director of Eclair USA, “I’ve long sought a way to connect not only the US but a broad range of interests in Europe and further afield via a common international digital cinema platform. With EclairPlay and DStar Cinema, we have that opportunity. We also have the means to assist the expansion of Australian films into the US and beyond, continuing growth and evolution of Eclair USA, a trend initiated earlier this year with content delivery to Melbourne’s NOVA Cinema, one of Australia’s most successful specialty film venues.”

SSCG’s DStar Cinema’s headquarters is equipped and operational with EclairPlay and able to ingest full DCI-compliant and other digital content for direct delivery across their platform to venue’s theatre management systems. DStar Cinema will service both theatrical and advertising clients in Australia and New Zealand.

About Shooting Star Company Group
Shooting Star, established in 1991and based in Sydney, Australia, comprises entertainment-based divisions including Shooting Star Productions which produces live events, advertising, television and 3D animation; Star Media Platinum, a cinema advertising network representing over 540 screens and Australia’s largest cinema chain; DStar Media/Cinema, which provides trailer localising production and distribution services to broadcasters and cinemas for film studios and music companies; and CinemaLive, a multi-award-winning, leading Event Cinema specialist and distributor based in the UK. Shooting Star Company Group is an independent, privately owned company with no financial affiliations or vested interests with any cinema exhibitors or venues. For more information – https://shootingstar.com.au/