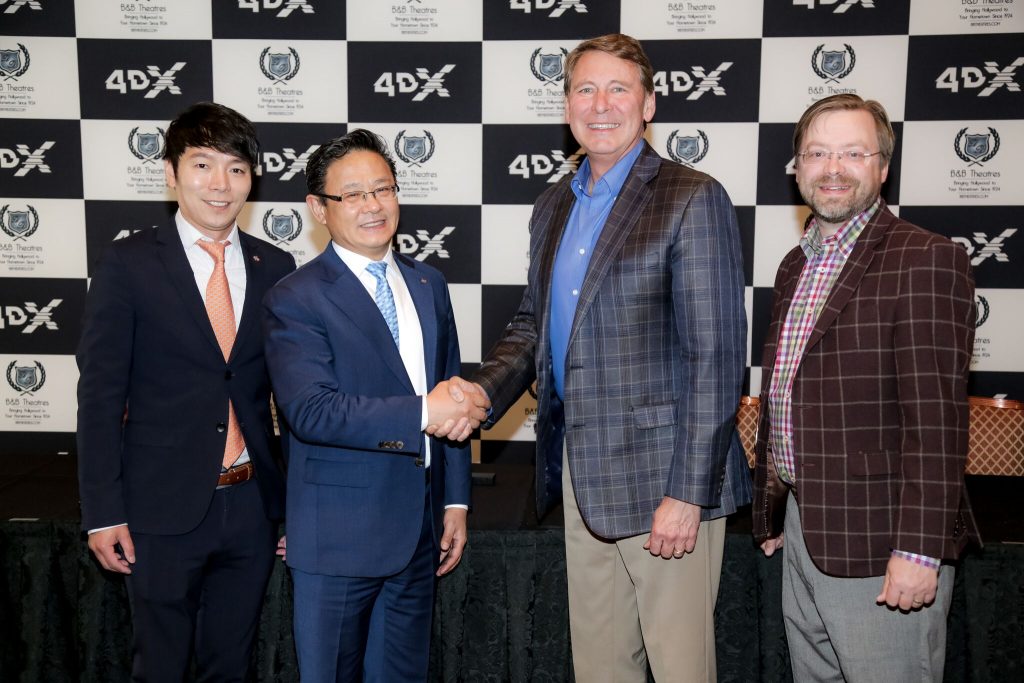 CJ 4DPLEX, the company behind the innovative cinema technologies 4DX and ScreenX, and B&B Theatres, the seventh largest exhibitor in the world, have partnered to bring four ScreenX screens to the cinema operator’s locations.

Before the opening of these theatres with B&B, ScreenX has three locations in operation in the U.S. in Los Angeles and Las Vegas, and more than 135 total screens globally. B&B Theatres will install the largest ScreenX system in the world in one of the two Premium Large Format (PLF) Grand Screens in Liberty, a screen that will be over four stories tall and seven stories wide. The screens with B&B Theatres are set to be the first in the U.S. outside of the American west coast.

Speaking of the implementation of this groundbreaking technology, B&B Theatres President Bob Bagby said, “Our guests will be blown away by the immersive experience of ScreenX! I can’t wait to showcase this in our new flagship theatre in my hometown of Liberty.”

And speaking of the collaborative effort, B&B Theatres Vice President of Finance Mike Hagan commented, “The ScreenX team was easy to work with throughout the whole process, and they have helped us create an experience in Liberty that is second-to-none. We look forward to a mutually beneficial relationship for years to come.”

ScreenX is the world’s first multi-projection theatre technology, created in 2012 to enhance the movie environment by allowing moviegoers to go beyond the frame of the traditional movie screen. It utilizes a proprietary system to expand images of feature films and pre-show advertising to the left and right walls of the theatre, creating an immersive, panoramic, 270-degree experience.

“ScreenX coupled with our B&B Grand Screen will create the most immersive movie-going experience imaginable. This breaks barriers into a new realm of cinema presentation and we are so excited to be the largest ScreenX system in the world” said Executive Vice President Brock Bagby.

“B&B Theatres is a perfect partner for us to bring our ScreenX technology to more places in the U.S.,” said Byung Hwan Choi, CEO of CJ 4DPLEX. “We strive to be in every state and every city, and we working with excellent partners like B&B Theatres is how we will complete our dream.”

About B&B Theatres
B&B Theatres has been family owned and operated since 1924 when Elmer Bills Sr. opened a movie house in Salisbury, Missouri where the future Mrs. Bills played the piano for silent movies. During the company’s 93 years, and four generations of family involvement, it has seen the coming of sound, color, Technicolor, stadium seating, multiplexes, recliners and digital cinema. B&B Theatres is the 7th largest theatre chain in North America and operates approximately 400 screens at 50 locations in Kansas, Florida, Missouri, Mississippi, Oklahoma and Texas.

About CJ 4DPLEX
CJ 4DPLEX is the world’s first 4D cinema company, headquartered in Seoul with international offices in Los Angeles and Beijing. The company created 4DX, the first and leading 4D cinema technology for feature films, providing moviegoers with an immersive cinematic experience that utilizes all five senses, allowing the audience to connect with movies through motion, vibration, water, wind, snow, lightning, scents, and other special effects that enhance the visuals on-screen. CJ 4DPLEX brings 4DX auditoriums to exhibition partners along with 4DX codes for both major Hollywood blockbusters and local titles. Each auditorium incorporates motion-based seating synchronized with more than 20 different effects and optimized by a team of skilled editors, maximizing the feeling of immersion within the movie, beyond the limits of audio and video. Since 2009, more than 520 Hollywood and local titles have been screened in 4DX. As of April 2018, more than 61,000 4DX seats operate in 500 auditoriums spanning 58 countries. CJ 4DPLEX was named a Most Innovative Company of 2017 in Live Events by Fast Company. The company was awarded the Silver Edison Awards in the Media and Visual Communications-Entertainment category in 2015 and 2018. For more information, please visit www.cj4dplex.com

About ScreenX
ScreenX is the world’s first multi-projection system used within a theatre setting. It was created in 2012 by CJ CGV, part of South Korean conglomerate CJ Group, as one of the “next cinema formats” along with 4DX, the multisensory cinema technology with motion and environmental effects. ScreenX allows moviegoers to go beyond the frame of the movie screen by utilizing a proprietary system that expands images of feature films and pre-show advertising to create an immersive, panoramic, 270-degree format that projects onto three theatre walls. To date, ScreenX has been installed on 140 screens around the world.