B&B and CJ 4DPLEX Expand Partnership to Bring Additional 5 ScreenX Auditoriums, Totaling the Footprint to 7 Locations Across the U.S. 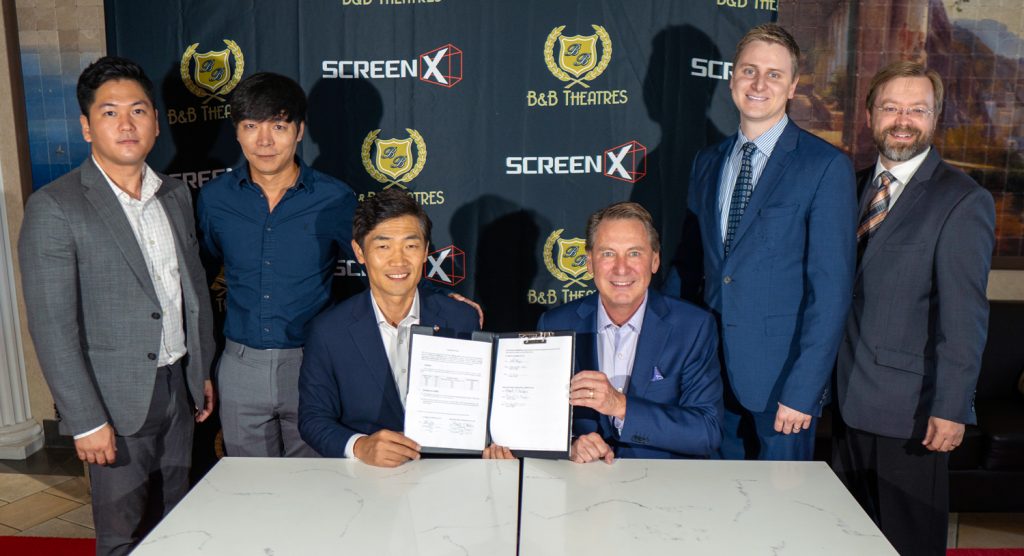 CJ 4DPLEX (www.cj4dx.com), the world’s leading cinema technology company, with B&B Theatres, announced today, the extension of their partnership to bring an additional five ScreenX auditoriums across the U.S., totaling seven with B&B Theatres by 2020.

CJ 4DPLEX and B&B Theatres partnered in 2018 to introduce the largest ScreenX system in the world, a screen that is over four stories tall and seven stories wide, offering moviegoers one of the most premium, immersive viewing experiences in history. Following the successful pilot, a second ScreenX auditorium will launch early September, boasting a surround sound system and a brand new auditorium seating layout that has never been done before in a ScreenX theater setting.

“B&B has been an excellent partner in shaking up the industry to introduce one-of-a-kind ScreenX experiences. We are thrilled to extend our partnership in expanding the ScreenX footprint to bring 5 additional auditoriums across the U.S.,” said JongRyul Kim, CEO of CJ 4DPLEX. “With B&B, we look forward to creating more one-of-a-kind ScreenX experiences, elevating the cinema-going experience further, and bring more of these experiences to more theaters and locations in the future.”

“The partnership with CJ 4DPLEX introduced the largest ScreenX in the world with outstanding performance numbers and audience feedback,” said Bob Bagby, President of B&B Theatres. “We look forward to continuing this partnership with CJ 4DPLEX in bringing more ScreenX auditoriums across the States and creating more premium in-theater experiences for B&B audiences in the future.”

About B&B Theatres
B&B Theatres has been family owned and operated since 1924 when Elmer Bills Sr. opened a movie house in Salisbury, Missouri where the future Mrs. Bills played the piano for silent movies. During the company’s 95 years, and four generations of family involvement, it has seen the coming of sound, color, Technicolor, stadium seating, multiplexes, recliners and digital cinema. B&B Theatres is the 7th largest theatre chain in North America and operates approximately 419 screens at 50 locations in Kansas, Florida, Iowa, Missouri, Mississippi, Oklahoma and Texas.

4DX provides moviegoers with an advanced, multi-sensory experience, allowing the audience to connect with movies through motion, vibration, water, wind, snow, lightning, scents, and other special effects that enhance the visuals on-screen. Each 4DX auditorium incorporates motion-based seating synchronized with more than 20 different effects and optimized by a team of skilled editors, maximizing the feeling of immersion within the movie, beyond the limits of audio and video. More than 660 Hollywood and local titles have been screened in 4DX. To date, more than 77,400 4DX seats operate in 664 auditoriums, spanning 65 countries.

ScreenX is the world’s first multi-projection theater technology used within a theatre setting, marking it as the most visually advanced theater experience of CJ 4DPLEX. ScreenX allows moviegoers to go beyond the frame of the movie screen by utilizing a proprietary system that expands images of feature films and pre-show advertising to the left and right walls of the theatre, creating a surrounding, panoramic, 270-degree viewing experience. To date, ScreenX has been installed in 235 screens around the world in 20 countries.