Cinema is Still a Blockbuster Hit in Ireland 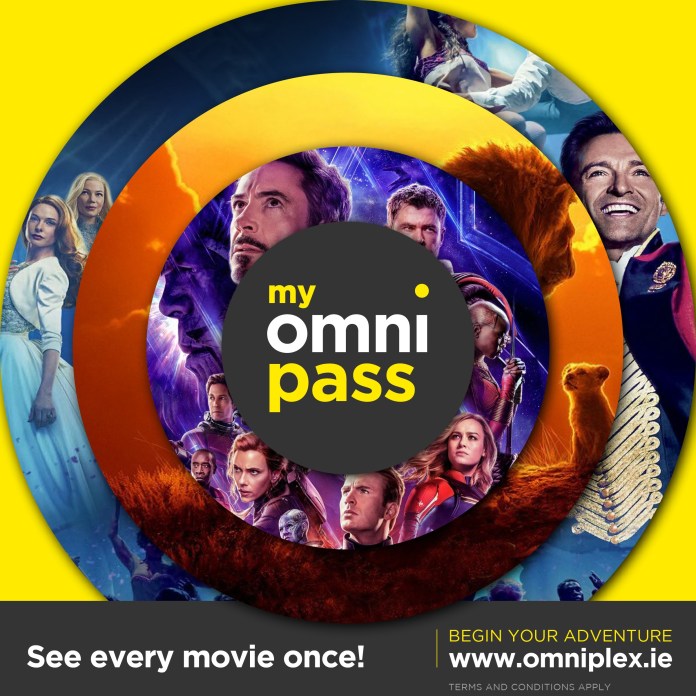 Belfast, Ireland (May 29, 2019) – 2019 is proving once again to be a strong year for moviegoers with Omniplex Cinemas reporting that on average every person on the island of Ireland will visit the cinema 3.8 times per year*. This makes Ireland the highest cinema-going nation in Europe for four years running.

Omniplex Cinemas, one of Ireland’s largest cinema chains, has been leading the charge in making cinema more accessible, memorable and interactive. Currently with 15 cinemas located across the province to date which including 6 OmniplexMAXX screens & 13 OmniplexRecline screens.

Over the past 10 years, an average of 702 movies are released per year, with the most popular genre in Ireland being action movies. This has been reflected by the huge swell in numbers following the release of Avenger’s Endgame which has grossed to date £6.4M at the box office**. Other popular genres in Ireland are comedy and animation.

However, Irish cinema-goers have a diverse taste, with a strong affinity towards musicals & music based movies. In 2018, Ireland was the only country in Europe to have two music-based films in their top two movie slots at the end of the year – Mamma Mia: Here We Go Again! and A Star is Born***.

Speaking on the demand of cinema across the Island of Ireland, Paul John Anderson, Director of Omniplex Group (NI) says: “I am delighted to see the continued growth and demand for cinema across Ireland. There is still a lot of nostalgia associated with going out to the cinema, grabbing your popcorn, socialising with friends and being fully absorbed by a narrative, away from the distractions of everyday life.”

Recognising this steady evolution of cinema, Ominplex Cinemas is now introducing its MyOmniPass – a monthly subscription scheme allowing customers to ‘See It All’. The monthly subscription includes a range of benefits including one ticket to every standard movie, 10% off your cinema treats, 10% off extra tickets online for your friends, free upgrades of MyOmniPass tickets to MAXX & Recline show, and exclusive screenings just for its members.

MyOmniPass
Commenting on this new subscription service, Paul explains: “A lot of customers have asked about a subscription service at Omniplex, and it’s taken us a little while to find the best solution. Two key elements of our service is that it’s all based on e-cards so once you have a smartphone you always have access to your card. And secondly, we’ve based the service on getting one ticket to every standard movie we’re showing, with an average of 702 movies released per year over the past 10 years we really want to give our customers a chance to see it all.

“2019 has already been a massive year for cinema and the upcoming releases of major films like Spider-Man far From Home, IT: Chapter 2 and Star Wars is set to continue this trend, making our MyOmnipass the perfect option for avid moviegoers.”

For more information on MyOmniPass and to register visit: https://www.omniplex.ie/myomni/