On the occasion of the 67th Berlin International Film Festival the European Audiovisual Observatory releases its first estimates for European cinema attendance in 2016. Building on a strong 2015, the Observatory estimates that total admissions in the European Union continued to grow, increasing by 1.6% to 994 million tickets sold in 2016. This is 16 million more than in 2015 and the highest level registered in the EU since 2004. Including non-EU territories in Europe, 2016 actually saw the highest admission levels of the past decades with estimated record admissions of over 1.27 billion tickets.

It is worth noting that admissions growth continued to be comparatively homogeneous in 2016: Cinema attendance increased in 19 and decreased in only five of the 24 EU markets for which provisional data were available. The majority of EU markets could therefore not only confirm the strong admission levels achieved in 2015 but actually increase them to various degrees. Geographically speaking the growth in EU cinema attendance was primarily driven by a strong year-on-year performance in France (+7.4 million, +3.6%), Poland (+7.4 million, +16.6%), Spain (+7.2 million, +7.5%) and Italy (+5.8 million, +5.4%). It’s also worth mentioning the record levels registered in the Czech Republic (+2.7 million, +20.6%) and the Slovak Republic (+1.1 million, +23.4%) which represent the highest levels in recent history. Indeed only two EU markets registered a significant decline in admissions: in Germany cinema attendance dropped by -18.1 million (-13.0%), partly due to a drop in admissions to local films, and the UK registered a 2.1% decline losing 3.7 million ticket sales compared to 2015.

Outside the EU, the Russian market jumped by 9.6% to 191 million after three years of stagnating admission levels. This is the highest level achieved in recent history and further strengthens Russia’s position as the second largest European market in terms of admissions. Turkey, the sixth largest European cinema market, saw its admissions declining for the second year in a row with cinema attendance falling by 3.6% from 60.5 million to 58.3 million tickets sold. Norway on the other hand registered the highest cinema attendance in 40 years with admissions increasing by 9% to 13.1 million.

In millions; estimated; calculated on a pro-forma basis for the 28 EU member states

Admissions growth probably driven by solid performance of US studio and selected national titles
Although it is too early to analyse EU admissions by origin, it seems that the fact that cinema attendance in the EU could not only maintain but actually exceed the exceptionally strong 2015 level is essentially due to the solid performance of a comparatively large number of US studio titles along with strong results for Italian, French, Polish and Czech films in their home markets. In contrast to 2015 when “Star Wars VII”, “Minions” and “Spectre” stood out selling around 38 million tickets in the EU each, no single film seems to have generated more than 30 million admissions in 2016. Top ranking films in the EU include animation films such as “The Secret Life of Pets”, “Finding Dory”, “The Jungle Book” and “Zootopia” as well as “Fantastic Beasts and Where to Find Them”, “Rogue One: A Star Wars Story”, “Star Wars VII”, “Deadpool” and “Captain America: Civil War”.

Compared to 2015, national market shares of EU films increased in 11 and declined in 13 of the 24 EU markets for which 2016 data were available. France was once again the EU market with the highest national market share (35.3%) closely followed by the UK (34.9%), the Czech Republic (29.5%), Finland (28.9%) and Italy (28.7%). Looking outside the EU, Turkey confirmed its leading position in terms of national market share with Turkish films capturing 53.4% of admissions in 2016. 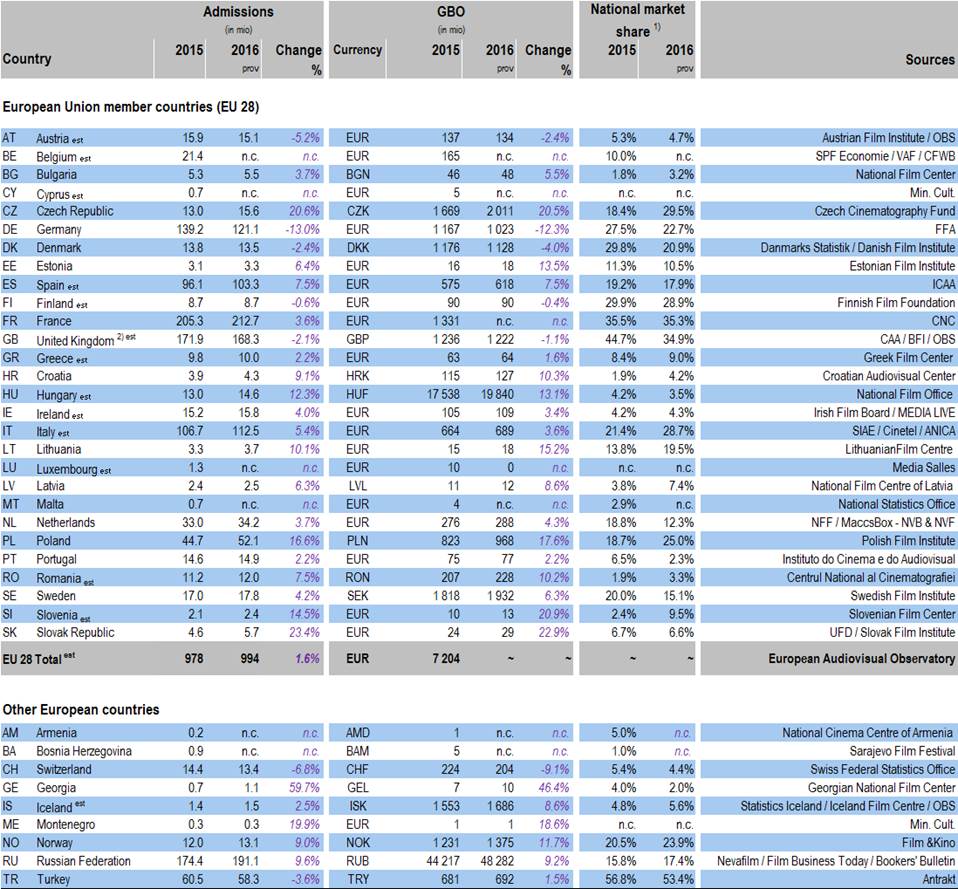 About The European Audiovisual Observatory
Set up in December 1992, the European Audiovisual Observatory’s mission is to gather and distribute information on the audiovisual industry in Europe. The Observatory is a European public service body comprised of 40 member states and the European Union, represented by the European Commission. It operates within the legal framework of the Council of Europe and works alongside a number of partner and professional organisations from within the industry and with a network of correspondents. In addition to contributions to conferences, other major activities are the publication of a Yearbook, newsletters and reports, the compilation and management of databases and the provision of information through the Observatory’s Internet site (http://www.obs.coe.int).