Cinema Attendance in the EU Drops in 2018

Strasbourg (February 7, 2019) – On the occasion of the 69th Berlin International Film Festival the European Audiovisual Observatory releases its first estimates for European cinema attendance in 2018. After three years of above average levels, the Observatory estimates that total admissions in the European Union decreased by 3.0% to 955 million tickets sold. This is 29.4 million less than in 2017 and the fourth lowest level registered in the EU since 2009. Including non-EU territories admissions in Europe declined as well, decreasing from the 2017 record level of 1.29 billion to 1.25 billion which still represents the third highest admission level of the past decades.

Just as in 2017, admissions developed in quite a heterogeneous manner across Europe in 2018: cinema attendance increased in eight and decreased in 13 EU markets, while remaining practically stable in 4 of the 25 EU markets for which provisional data were available. Geographically speaking the moderate decline in EU cinema attendance was primarily caused by a major drop in German admissions (-16.9 million, -13.9%) as well as a comparatively poor year-on-year performance in France (-8.9 million, -4.3%) and Italy (-7.0 million, -7.0%). Out of the five major EU markets, only the United Kingdom registered an increase in cinema attendance of 3.7% to 177 million admissions. This is the highest admissions level in the UK since 1970. Admissions also grew to record levels in Poland (+3.1 million, +5.5%), Romania (+0.6 million, +4.5%) and the Czech Republic (+1.1 million, +7.3%).

Outside the EU, the Russian market passed the 200 million benchmark for the second time, albeit declining from 211 million to 200 million admissions. This is the second highest level achieved in recent history and confirms Russia’s position as Europe’s largest cinema market in terms of admissions along with France which reclaimed the throne by a wafer-thin lead in 2018. Similarly cinema attendance in Turkey, the seventh largest European cinema market, declined only slightly on its 2017 record level from 71.2 million to 70.4 million admissions.

It is too early to analyse EU admissions by origin, but the first available figures would seem to suggest that the drop in admissions was largely caused by a year-on-year decline in admissions to US films. Like in 2016 and 2017, it looks as though there were no break-away successes in 2018. Top ranking films in the EU include Avengers: Infinity War (US / GB), Incredibles 2 (US) and Bohemian Rhapsody (US / GB). Compared to 2017, national market shares of EU films increased in 13 and declined in 11 of the 24 EU markets for which 2018 data were available. The UK registered a 44.8% market share for UK qualifying productions (including US studio-backed, UK-made titles). This was the highest national market share among EU markets, though independent UK productions captured only 11.7%. Ranking second was France with a national market share of 39.3%, ahead of Poland (33.1%). Other EU markets with high national market shares include Denmark (29.4%), Lithuania (27.5%), Finland (23.6%), Germany (23.5%), the Czech Republic (23.3%), Italy (23.2%) and Latvia (22.1%). Outside the EU, Turkey confirmed its leading position in terms of national market share with Turkish films capturing 62.9% of admissions in 2018.

Link to this data in the form of an Excel table

Our next cinema figures will be released just before the Cannes Maché du Film. 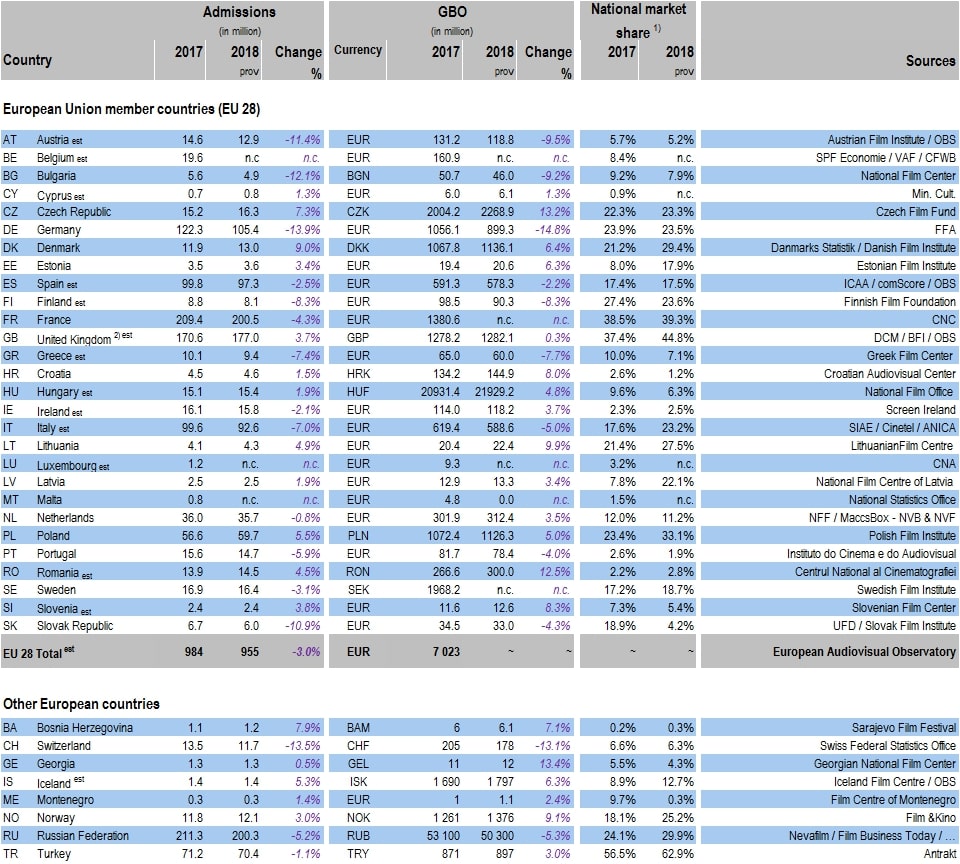