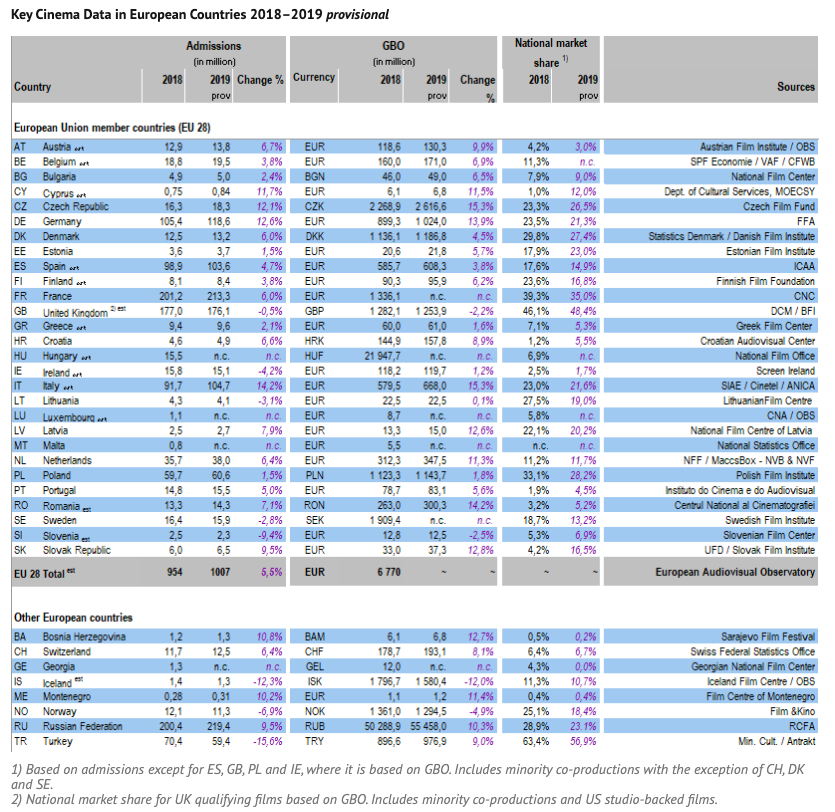 On the occasion of the 70th Berlin International Film Festival, the European Audiovisual Observatory releases its first estimates for European cinema attendance in 2019. After two years of decrease, the Observatory estimates that total admissions in the European Union increased by 5.5% thus breaking through the 1 billion barrier. This is 52.6 million admissions more than in 2018, making the best result registered in the EU since 2004. Taking into account non-EU territories, admissions in Europe also showed an upswing, increasing from 1.25 billion in 2018 to 1.31 billion, a record for at least the last two decades.

Outside the EU, the Russian market once again crossed the 200 million threshold, recording a total of 219.4 million admissions in 2019 (+9.5% on the previous year). This sets a new record in recent history and confirms Russia’s position as Europe’s largest cinema market in terms of admissions, ahead of France. In contrast, Turkey registered a decrease in cinema attendance, with admissions down from 70.4 million in 2018 to 59.4 million in 2019.

It is too early to analyse EU admissions by film origin, but the first available figures suggest that the upswing in cinema admissions was primarily driven by a year-on-year increase in admissions to US films. Unlike previous years, 2019 saw the release of several megahits, each generating more than 30 million admissions at the EU box office. Top ranking films in the EU in 2019 include The Lion King (US), Avengers: Endgame (US), Frozen 2 (US) and Joker (US / CA).