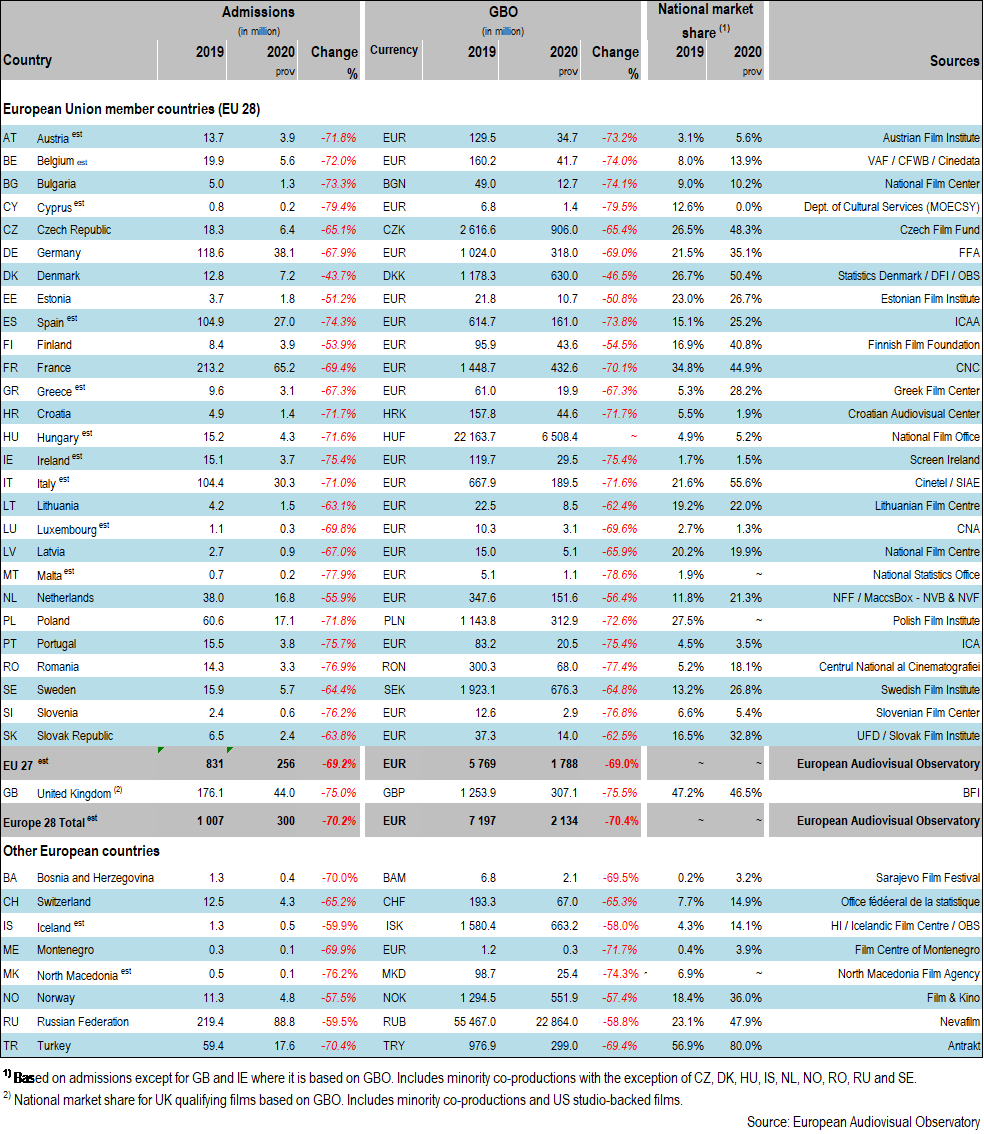 COVID pandemic causes theatrical markets across Europe to plummet by over 70% in 2020
Cinemas throughout most of Europe had to close in response to COVID restrictions in March 2020. While most theatres were allowed to reopen from mid-May / June onwards, they could only operate under strict restrictions including capacity limits and had to close again during the second wave in late autumn. On top of this, most blockbuster films planned for release in 2020 rescheduled their theatrical release or – in some cases – were directly released on premium VOD. As a result, the theatrical market collapsed in 2020 with cinema attendance in the EU and the UK plummeting by 70.2% to an estimated 300 million tickets, down from over one billion admissions in 2019 (the highest level since 2004). Gross box office earnings dropped correspondingly from EUR 7.20 billion to EUR 2.13 billion (USD 2.4 billion), down by 70.4% from 2019, as the average ticket price in the EU remained stable at EUR 7.1 (USD 8.1).

1917 and Tenet led the box office charts in Europe 28 in 2020
While US titles continued to dominate the charts in the European Union and the UK accounting for 17 out of the top 20 titles in 2020, they were almost exclusively films released either in 2019 or in in the first quarter of 2020 before the first lockdown. In fact, only two films among the top 20 films – Tenet (US/GB) and After We Collided (US) – were released later in the year. Not only was there a lack of US tentpole releases after the first lockdown, the top grossing films also sold significantly fewer tickets than in previous years. World war I drama 1917 (EUR inc[1]/US) became the most successful film selling 15.6 million tickets in the EU and the UK. In comparison, The Lion King (US/GB) which topped the charts in 2019 sold 51.6 million admissions. While a total of 18 films sold more than 10 million tickets in 2019, only three films managed to do so in 2020: apart from 1917, these were Tenet (11.6 million) and Bad Boys for Life (10.5 million). In contrast to previous years, 2020 saw a comparatively low number of film franchises with only seven titles out of the top 20 being sequels, prequels, spin-offs or reboots, compared to 18 in 2019. Apart from the EUR inc production 1917 (“EUR inc” refers to films produced in Europe with incoming investments from US studios), the Italian comedy Tolo Tolo was the only European film to feature among the top 20 titles, generating 6.7 million admissions. Other successful European films included the Spanish family comedy sequel Padre no hay más que uno 2: La llegada de la suegra (1.9 million), Polish erotic thriller 365 dni (365 Days) (1.7 million) and French family comedy sequel Ducobo 3 (1.6 million).

European market share reaches record high due to lack of US tentpole releases
The lack of US blockbuster releases in 2020 is clearly reflected in the breakdown of admissions in the EU and the UK by origin. While admissions to US films fell by an estimated 78%, admissions to European films dropped by “only” 55% and admissions to European films produced in Europe with incoming US investment (EUR inc) and films from other parts of the world decreased by “only” 41%. The market share of European films hence reached a record high of almost 40% of total admissions, mostly driven by often exceptionally high market shares of national films in the respective markets. This compares to 26.3% in 2019. US market share on the other hand dropped from 68.2% to 49.4%, the lowest level registered in recent history. EUR inc films captured 6.0% (compared to 3.0%) of total admissions in 2020 and films from other parts of the world represented 4.9% (compared to 2.5%).

On a national level, local European films reached record levels in several markets which were marked by the lack of US tentpoles. Within the EU and the UK it was Italy which registered the highest national market share with an incredible 55.6%, followed by Denmark (50.4%), the Czech Republic (48.3%), the United Kingdom (46.5%), France (44.9%), Finland (40.8%) and Germany (35.1%). Outside the EU, Turkey was once again the European territory with highest national market share reaching an unparalleled 80.0%. Russian films also capture a record market share of 47.9%.

Film production in the EU and the UK drops by 30% in 2020
Having reached a temporary standstill all over Europe due to the lockdown measures taken in March 2020, film production was taken up again in early summer following strict sanitary protocols. In contrast to theatrical exhibition film shoots were largely allowed to continue throughout the second wave in autumn and winter, often at levels equal to or even higher than before the pandemic. Film production volume in the EU and the UK consequently did not collapse in the same manner as box office did. The Observatory estimated that a total of 1403 theatrical feature films were produced in the EU and the UK in 2020, down “only” 30% on the 2019 record level of 2 007 feature films.