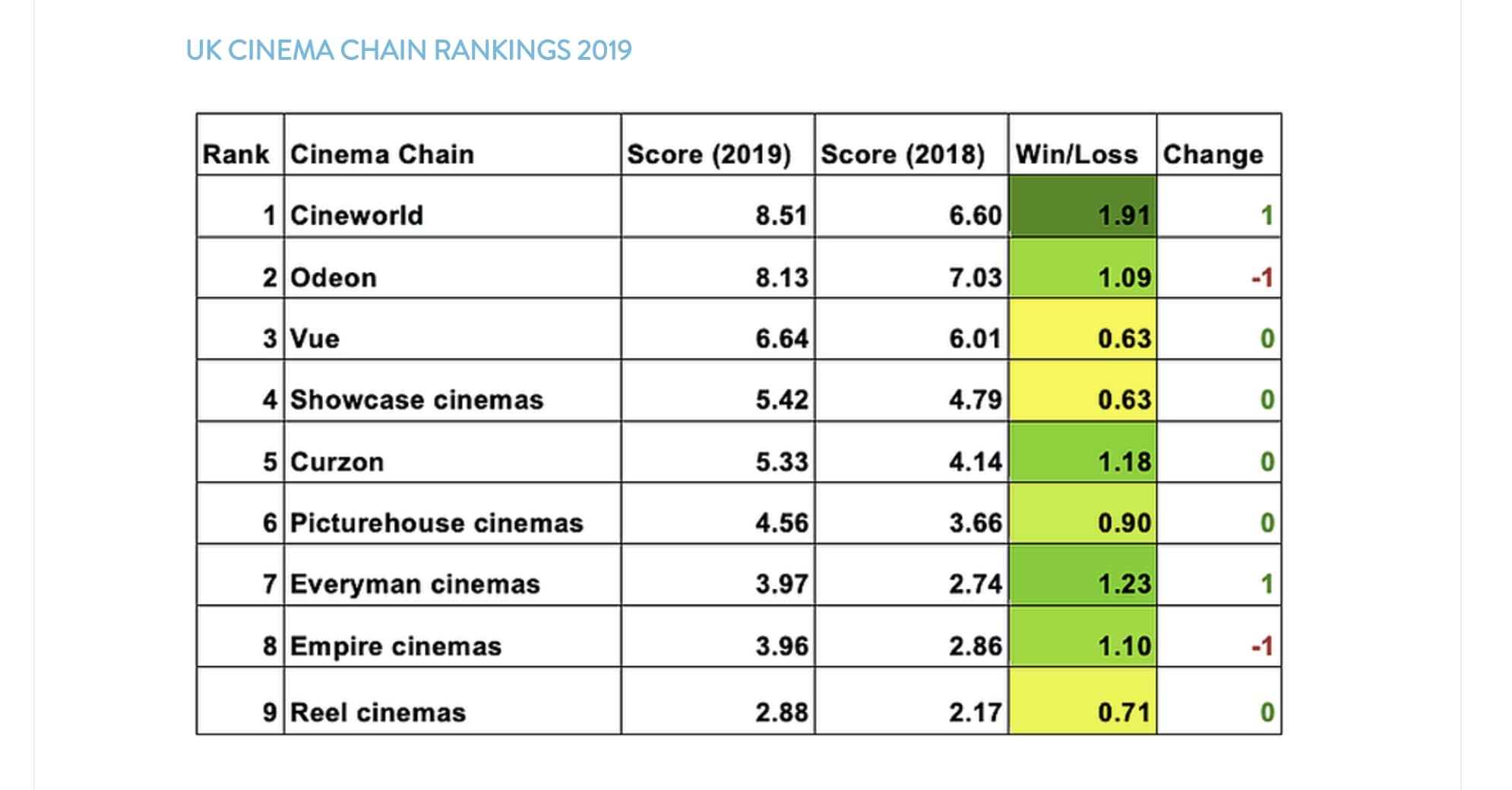 Cineworld has come out top in an analysis of which UK cinema chain’s website in was best “in terms of their effective engagement with online audiences.” The study was part of an annual review conducted by online marketing specialists Gruvi. The A.U.D.I.T. had only been released with the names of the cinema chains removed in past years, but this year that naming and ranking is public. The raw data used for the analysis can be found on a publicly accessible Google doc sheet (https://docs.google.com/spreadsheets/d/1h8OnmPLRRAirF2ge0qfY-aBljB2aVxlXZf_iphbBDqU/edit#gid=1144734815) where all aspects of the study are open for review, including the weighting & balancing of certain measures.

A.U.D.I.T. stands for the five criteria in measuring how effective the websites are: algorithm, user, data, influence and traffic were all criteria that were applied in evaluating. Traffic, for example, “[s]hows the traffic each page generates within a month & how long people stay on that page, also how many different pages in the site the user visits.” The results were then added up and compared to other exhibitors’ score. The good news is that there was a significant overall improvement for the whole of the sector, compared to the previous year. These shows that UK chains were getting better at engaging with their customers online.

While Cineworld came out ahead, it was only marginally above Odeon, with a 8.51 compared to 8.13, so a difference of just 0.28 between the two. Odeon was thus overtaken from the previous’s years (non-disclosed) top spot. There was more than an entire point’s difference with the third-ranked Vue at 6.64, while Showcase cinemas and Curzon were another point or two below, both of whom recorded the smallest gain of 0.63 each. Picturehouse cinemas was just below with a gain of 0.90. Everyman was a lowly sixth (3.97 points), though noting the second-best improvement since last year after Cineworld. Languishing at the bottom were Empire (3.96 points – dropping on place) and Reel 2.88 points), presumably because they have less spending power to help improve their online presence. There was no score or inclusion of The Light Cinemas.

In the breakdown it is interesting to note that Odeon ranks first in three of the five categories (Algorithm, Users and Traffic), but is let down by a low score in the ‘Influence’ category, with Cineworld topping both this category and Data. However, it is worth pointing out that the data behind all of these findings is effectively a snapshot of the work undertaken by the cinemas over a specific time period (December 2019); the analysis of the data is specific to that fixed period and may not reflect work undertaken by any one cinema chain earlier in the year:

Gruvi noted the positive improvement since last year on its blog post:

|Improving the digital marketing experience and the customer [online] journey has been the intense focus for Europe’s three largest cinema chains and their smaller rivals for several years now. Gruvi notes that this is going in the right directions:

Losing traffic is a phenomenon we can see across Europe, but most UK cinema chains have already taken steps to counter this with backlink strategies and increased advertising spends on display ads and SEM (Search Engine Marketing). While some of the cinema chains’ social media strategies seem a little outdated it is encouraging to see they have all commissioned paid advertising on at least one social media platform in order to highlight their current program of films, membership schemes, competition sweepstakes, or key upcoming film releases.

Gruvi has been advising both cinema operators as well as distributors trying to get the most cost effective online reach, particularly for local, foreign, independent and documentary films, including most recently “Parasite”. Gruvi sees the UK cinemas out ahead of other European chains and notes that when it comes to online engagement, smartphones rule with 80% of the traffic to the websites. It confirms that having the right online presence is a moving target for cinemas, but one that Gruvi has now focused a very public laser spot on.