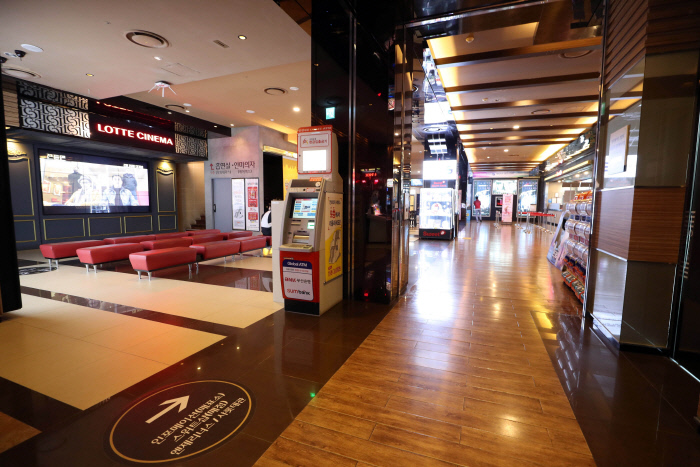 This is a roundup of cinema news related to the global Corona virus (Covid-19) outbreak. It is important to remember that while the virus is more contagious than previous SARS outbreaks, it has a relatively low mortality rate of 2% (mainly old and ill people) , though higher than the 0.01% mortality rate of seasonal flu. As with any outbreaks, there is always a greater danger from panic or misinformation than from the virus itself often.

China – Cinemas remain closed since the Chinese Lunar New Year last month. With over 70,000 screens dark, this means that 35% of the world’s cinema screens are not active today. Chinese holiday releases have been postponed, with one (“Lost in Russia”) released online. There is no indication when these cinemas will re-open and several Hollywood films, such as Disney’s “Mulan” will have a delayed release, while Bond film “No Time to Die” has cancelled its Beijing premiere. The impact on the Chinese film industry is said to be ‘crippling’;

South Korea – As we reported yesterday, there has been a -60% drop in admissions week-on-week, with the 80,000 tickets sold being the lowest in 16 years (since The lowest figure since 31 May 2004). Occupancy of the top 10 cinemas is just 3.5%. Several cinemas, as well as museums, galleries and other cultural institutions have been closed out of precaution. Local film releases are being postponed.

According to NoCutNews: “The number of audiences in February dropped by 9.7 million (59%) compared to the average number of audiences (16.5 million) in February over the past seven years from 2013, when the audience of 200 million movie theaters last year.” The impact has been bigger than that of MERS in June 2015, though audience figures bounced back later that summer.

According to SeDaily, “theaters have entered an emergency management system and are tightening their belts in a way that reduces screening times.” Lotte executives are ‘voluntarily’ returning 20% of their pay and ‘recommends’ unpaid leave to staff. The first US soldier stationed in South Korea has been confirmed as having contracted Covid-19, and as a result, “[b]owling alleys, movie theatres and a golf course at four US bases were closed,” as of yesterday.

Vietnam – As we also reported, both schools and cinemas have been closed in North Vietnam, but “there has been an increase in children going to the cinemas which do remain open,” not least due to the popularity of the “Sonic the Hedgehog” film. “Movie releases and music shows have been put off as coronavirus fears keep people away from possible crowded places,” VNExpress reports. “Mega GS cinema in Ho Chi Minh City reported a more than 50 percent decrease in the number of moviegoers.” The majority of cinemas in Vietnam are operated by Korean companies (CGV and Lottte).

Italy – Events, museums and cinemas have been closed in seven regions in Northern Italy: Lombardy, Veneto, Emilia Romagna, Piedmont, Friuli, Trentino and Liguria. Over 850 screens in total have been closed, meaning that almost 50% of Italy’s 1,800 screens are dark. “The blockade of all entertainment activities in the regions of Northern Italy is in fact generating an extremely negative economic impact, both due to the drop in ticketing revenues and to the drastic reduction in the wages of the sector employees.”

Initially the closure was meant to last a week, but could go on longer. Italian film releases are being postponed, including “You live once only” by Carlo Verdone, “I wanted to hide” with Elio Germano and “Lupine III – The First”. Cinemas are angry that nearby restaurants remain open. “You are overestimating a virus that is little more than a flu,” one irate cinema operator is quoted as saying. But “The world of cinema is facing the long wave of a coronavirus that risks doing a lot of harm to a sector that in recent months was seeing some light again after years of takings and decreasing presences,” writes financial paper Il Sole 24 Ore. The filming of “Mission: Impossible 7” in Italy has been halted.

Iran – In a strange twist of fate, an Italian film festival has been postponed in Iran over the Corona virus outbreak. “A lineup of seven Italian movies was scheduled to go on screen during the program, which was to run until February 26 in the three Iranian cities of Tehran, Shiraz and Kish Island.” The Iranian government has announced that “all art and cinema events in halls across the country have been cancelled until the end of the week” in order to stop infections.

Greece – With the first confirmed case of Covid-19 in Greece, the government “foresees the temporary closure of “indoor public gathering areas” such as schools, places of worship, cinemas, theatres, sports halls and businesses.”We are ready to do whatever is necessary to protect public health,” government spokesman Stelios Petsas told reporters.”

That’s what indie cinema The Projector is calling one of its promotions, named after the Mexican beer and the coronavirus now officially known as COVID-19.

In a tongue-in-cheek Instagram post, The Projector wrote, “Afraid of the virus but love the beer? Enjoy 3 hours of exclusive Blue Room use with free Corona beer in a Corona(virus)-free environment.”

Don’t panic (yet) and have a beer.