Dutch exhibition major Pathé Netherlands has suspended Managing Director Dertje Meijer and Finance Director Edwin Slutter effective immediately. Both the nature and the timing of the announcement came as a surprise to the industry. No specific reason was given for the action, only that the two senior executives “no longer enjoyed the confidence” of the company’s shareholder.

An email was sent out from Pathé Theatres BV on Friday 30 March (shown below, translated at bottom) stating that Meijer and Slutter were being suspended with immediate effect and that the former head of Pathé Netherlands, Lauge Nielsen, would take over the running of the company. Nielsen stepped down in May of last year after several years in charge of the company, but continued to act as a consultant for the Pathé owners. 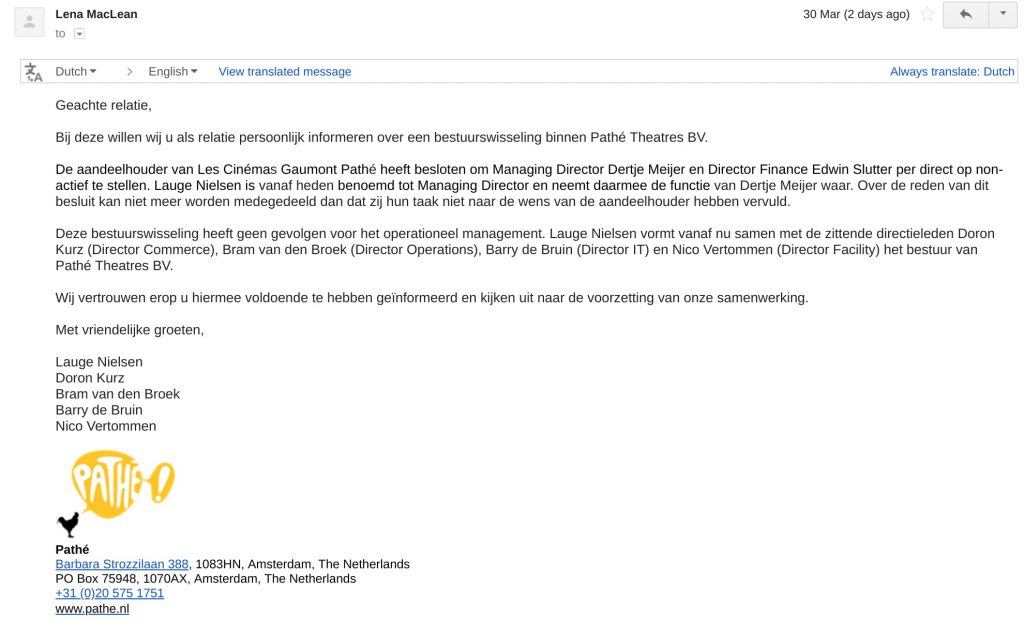 The fact that the email was sent out on Good Friday, at the start of the long Easter holiday in Holland and Europe, caused surprise throughout the industry. Furthermore, no specific reason was stated, with the email making explicit that the “reason for this decision can not be communicated” at this time, but that Meijer and Slutter have not “fulfilled their duties to the wishes of the shareholder”, which in the case of Pathé Netherlands is the Seydoux family.

Dertje Meijer was only appointed head of Pathé Netherlands on 1 March of last year, having previously run the Port of Amsterdam between 2009 and 2016, where she had overseen the privatisation of the Port as one of several major projects. Edwin Slutter was a partner at KPMG Netherlands between 2006 and 2014, when he joined Pathé Netherlands. The news was first reported in Holland Film Nieuws and later picked up by Dutch newspaper de Volkskrant.

Both Pathé Netherlands, and the country as a whole, enjoyed a strong box office year in 2017 on the back of the opening and re-opening of several big multiplexes, with the highest cinema attendance since 1965. The recently re-opened flagship multiplex Pathé de Kuip in Rotterdam welcomed its 100,000th 4DX visitor. It is the most successful of the circuit’s 28 cinemas and 217 screens that Pathé operates in the Netherlands. Pathé is on a major expansion and refurbishment drive that saw it acquire three cinemas from United Dutch Bioscopen and United Twentse Bioscopen in October of last year.

In 2016 Pathé Theatres BV had revenue EUR €174.5 million (USD $215.2 million) and a profit EUR €20.6 million (USD $25.4 million). According to de Volkskrant  the company has yet to submit annual accounts for 2017.  The paper also reorts that construction of a cinema in Leeuwarden was halted last week because costs were reported to have “got out of hand.” According to HFN the construction of Pathé Ahoy in Rotterdam was recently announced, with refurbishment underway of Pathé Schouwburgplein and several others, including plans for Pathé De Munt, next to the historic Pathé Tuschinsky in central Amsterdam.

Dertje Meijer was recently named to Celluloid Junkie’s Top 50 Women in Global Cinema. She impressed the European cinema industry by holding her own against Kinepolis’ CEO Eddy Duquenne at CineEurope’s panel on women in cinema last June. Because of the Easter holiday Celluloid Junkie was unable to contact Pathé Netherlands, Dertje Meijer or Edwin Slutter for an official response.

The following is a translation into English of the original Dutch email distributed by Pathé Netherlands:

We would like to inform you as a customer personally about a government change in Pathé Theaters BV.

The shareholder of Les Cinéma Gaumont’s Pathé decided that Managing Director Dertje Meijer and Finance Director Edwin Slutter should immediately become inactive. Lauge Nielsen will be appointed Managing Director as of today and takes over the function of Dertje Meijer. The reason for this decision can not be communicated now other than to say the executive have not have fulfilled their duties to the wishes of the shareholder.

This change in management will not affect the operational management. Lauge Nielsen is now, together with the incumbent directors Doron Kurz (Director Commerce), Bram van den Broek (Director Operations), Barry Brown (Director of IT) and Nico Vertommen (Director Facility) the board of Pathé Theaters BV.

We trust that this information is sufficient and look forward to the continuation of our cooperation.