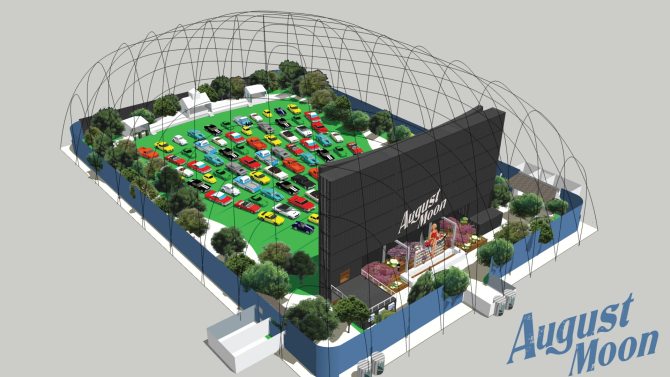 USA (TN) – Combining two seemingly un-matchable experiences, a replica indoor drive-in cinema will open by the end of next year in Nashville. The August Moon Drive-In is a USD $10 million project to create a simulacra 1960s drive-in under a dome, with seating in modified vintage cars and a food service of burgers and milkshakes but also alcohol. Created and designed by Michael Counts, whose background is in immersive theatre and the man behind “The Walking Dead Experience”, it will feature North America’s largest non-Imax screen. Call it Alamo Drafthouse-meets-Secret Cinema. Variety – 6 February 2017

UK – Showcase Cinema de Lux has opened the UK’s first all-laser multiplex (using Barco Phosphor and RGB lasers) in Southampton. The new Westquay leisure hub is said to be a GBP £85 million investment and also features Dolby Atmos in all of its 10 screens. It is only the fourth all-laser multiplex in Europe. BBC – 10 February 2017

UK – This past weekend also saw the opening of Odeon’s new flagship multiplex in Bournemouth, it too a 10-screen cinema that includes an iSense PLF. You can take a 360-degree/VR tour of it HERE. Several interesting ‘firsts’ with this Odeon that we can’t reveal just yet. Heart – 10 February 2017

Korea (Republic of, South) – While Lotte, Megabit and CGV dominate the exhibition landscape in Korea, some interesting small cinemas also thrive, such as this one that will open in March and is run by the South Korean army (!), after it closed arts hall. With just 52 and 47 seats for the two screens the cinema will show five to eight movies per day. JBNews (KR) – 9 February 2017

Brazil (São Paulo) – Cinesystem has opened it’s first multiplex in São Paulo.  The nine screen complex is located in the Morumbi Town mall, with five auditoriums featuring stadium inclines and four smaller rooms.  Cinesystem spent BRL R$16 million (USD $5.13 million) on the theatre and though it doesn’t have any dedicated VIP rooms, it does have VIP “spaces” in the last five rows with reclining seats, footrests, dining tables and even USB chargers for mobile phones.  Those seated in the non-VIP areas of each auditorium get armchairs that are wider than traditional cinema seats and come with “flirtatious” armrests (wonder what they mean by that – nudge, nudge, wink wink).  Cinesystems newest venue is also the first “all laser” movie theatre in Latin America, having been kitted out with Barco’s Flagship Laser and Laser Phosphor projectors. Terra (PT) – 20 January 2017

USA (CA) – The Santa Barbara International Film Festival saw launch of a USD $5 million fundraiser to upgrade the Riviera Theatre. It was converted into a movie house in 1965 and has been acquired on a 30-year lease by the SBIFF, which aims to urn it into a multi-purpose, state-of-the-art film education centre.

“We’ll install new seats, a new slope to the floor with better sightlines and a full acoustic transformation with the installation of an Dolby Atmos system with 48 surround-sound speakers. We’ll install a green room lounge area as well as classroom space for educational programs,”

France – Paris’ arthouse cinema Les 3 Luxembourg has re-opened, after completing the seven-month renovation work that closed it in July of last year. The cinema is apparently rejuvenated “without having lost its soul” and even sports a new metallic facade. Credit to the 33 year old entrepreneur Charlotte Prune who was responsible for taking over the cinema in 2012. Les Parisien (FR) – 3 February 2017

Germany – The Cineplex Capitol Kino in Kassel will have a €2.5 million refurbishment, including changing to recliner seating, new screens and improved retail area. The 17 year old cinema will also get improved sight-lines, acoustic and immersive seating. The 1,500 seats will be reduced by 10%. HNA (DE) – 10 February 2017

Germany – Cineccitta’s parent company has revealed more plans for the re-opening of the Erlangen Manhattan cinema. The cinema will become a luxury cinema with seven to eight screens and 600 seats. Work will take around a year so opening is anticipated for summer of 2018. Meanwhile there have been heated exchanges online between the new and the old owners.  Blickpunkt: Film (DE) – 6 February 2017

India – Mumbai’s iconic New Excelsior has re-opened after an extensive refurbishment. Now called Mukta A2 New Excelsior  near the CST Railway terminus in Mumbai has shrunk form 1,100 to 596 seats but remains a single-screen. The Reel – 10 February 2017

Poland – Millenium cinema in Lomzyn has re-opened after a major renovation. We like the fact that the event was celebrated with a cake. Wyborcza – 3 February 2017 UK (Wales) – Great success for crowdfunding campaign to re-open this cinema in Wales that was closed when asbestos was discovered last year. The Market Hall Cinema is 123 years old and lost GBP £95,000 due to closure but hopes to re-open after work to remove asbestos gets funding. WalesOnline – 11 February 2017

Spain – Madrid’s second largest single screen is closing. The Palafox cinema will stop screening film on 28 February after 55 years of operation. But the 856-seat cinema has been acquitted by Kinepolis-Owned Yelmo. The cinema was renovated in 1995 when it shrank from 1.322 seat to become a multi-auditorium cinema with two new screens of 250 seats each. It is also used for opera and ballet performances. Yelmo has not revealed its plans yet. The largest screen in Madrid is the Cine Capitol de Callao. El Mundo (ES) – 7 February 2017

Switzerland – Cinemas are becoming an endangered species in Bern’s city centre. The latest to close it Cine Royal, with owner Kitag planning a ten-screen multiplex with restaurants and bowling at the edge of the city instead. Berner Zeitung (DE) – 7 February 2017

USA (NY) – Not new but the Financial Times’ How To Spend It Magazine has a great profile of the Metrograph Cinema in New York. The writer confesses to having walked past it many times not realising it is a cinema [Ed: Surely that’s not a good sign?] but after his first visit it “became one of my favourite cinemas in the world,” and waxes about it lyrically:

Everything about the place is a joy: from the typography used for all its signage to the velvet seats in the main screening room, fashioned out of wooden beams salvaged from the demolished Domino Sugar Refinery across the river in Brooklyn, and the Dolby system taken from the landmark Ziegfeld Theatre uptown, which closed last year. The Metrograph might be new, but it has been lovingly crafted with great respect for the analogue past.

We can’t wait to visit it ourselves. Read about it and feast your eyes on the great photos in the meantime. FT – 12 February 2017