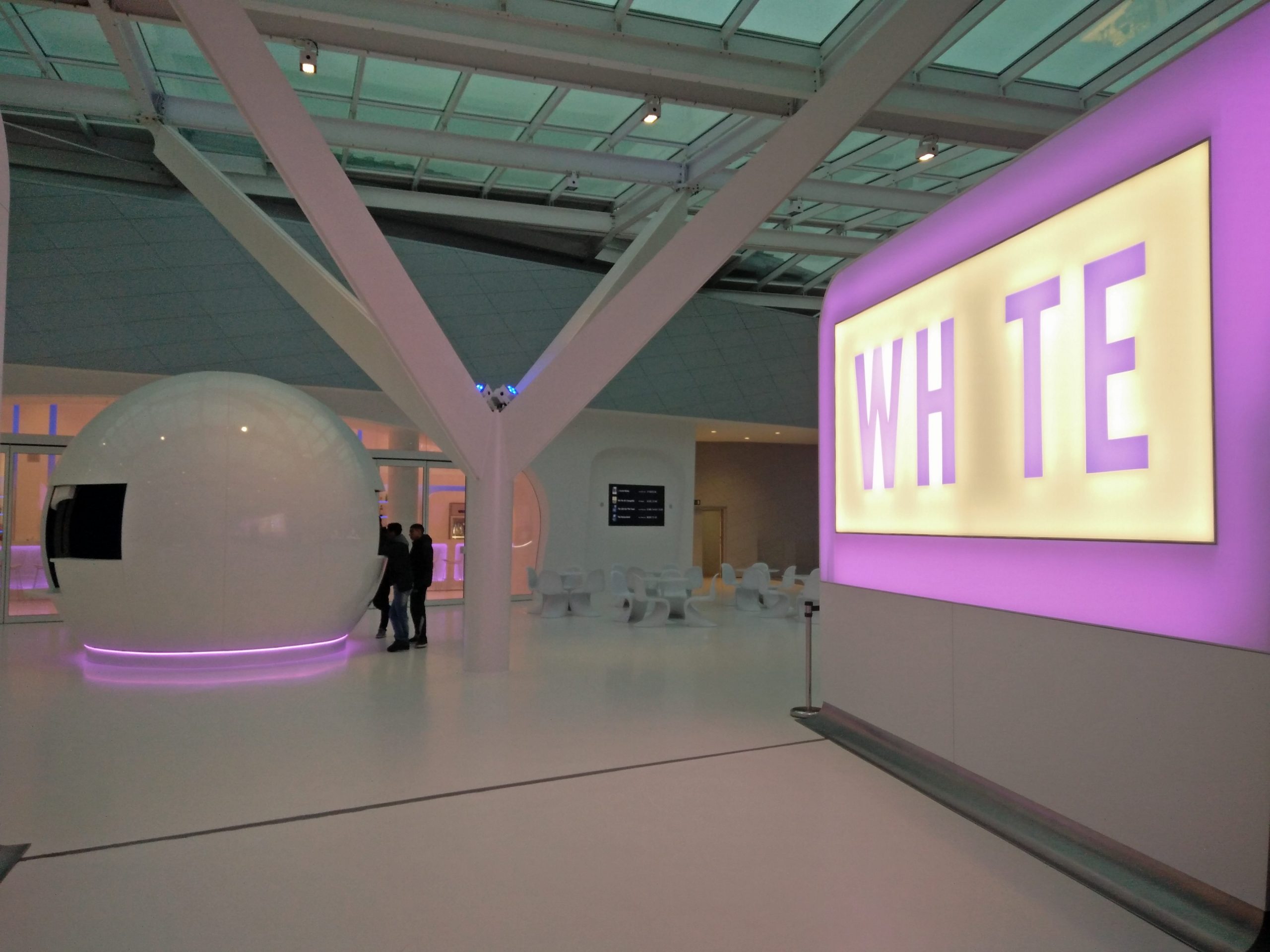 Celluloid Junkie is proud to have partnered Vista Entertainment Solutions (VES) for the Cinema of the Month series. Vista is the worlds leading cinema ticketing and software solutions company. We won’t just be featuring cinemas whose operators use Vista, but we will surely mention when that is the case. CJ would like to thank everyone at Vista for enabling us to showcase some of the most interesting, innovative and inspiring cinemas from around the world.

How does a new cinema operator differentiate itself in a city with two major dominant cinema chain? By embracing a take-no-prisoners reinterpretation approach to what a cinema can be. Brussels’ White Cinema posits itself as “Cinema Reimagined” and “Another Idea of Cinema”, which it definitely lives up to, coming across as a cinema created by Nicolas Winding Refn, working from a blueprint by Stanley Kubrick.

In a city and country dominated by Kinepolis and UGC, it would take a brave cinema operator to dare to open a brand new multiplex in Brussels. Except White Cinema is not owned by a traditional cinema operator, but by distributor Belga Films, the 79-year old distributor that is Belgium’s second largest distributor, handles EuropaCorp and Lionsgate releases and recently even ventured into English-language film production.

To get to the White Cinema you have to leave your central Brussels comfort zone, venture north to the old Brussels docks and cross the Van Praet bridge to arrive at the recently opened Docks Bruxsel, located on the site of the old Godin Poêleries. The massive eco-friendly shopping mall is over 50,000 square meters housing 113 shops. It has a new tram station outside but still feels far removed from the Brussels you might know. 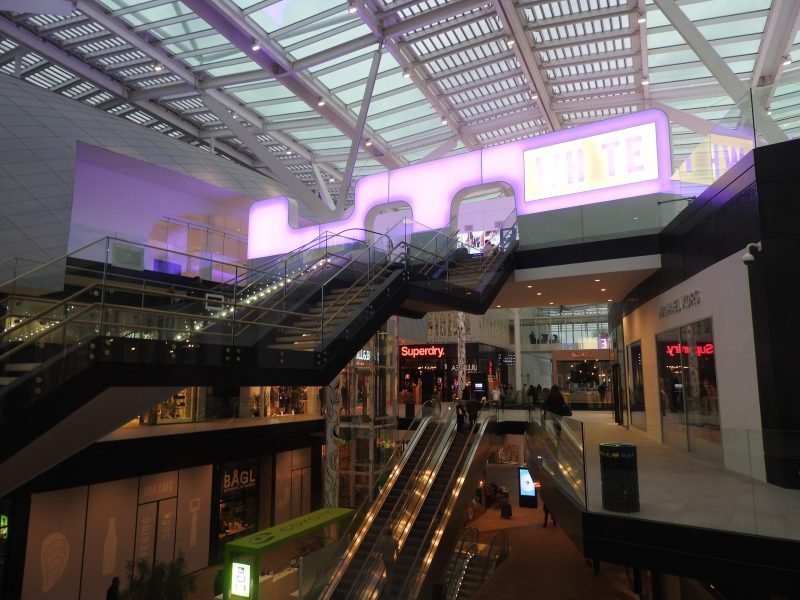 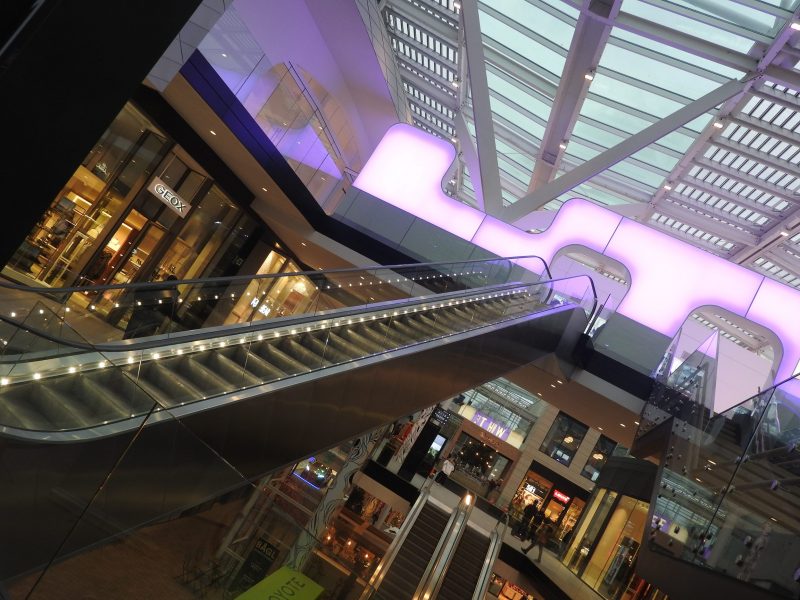 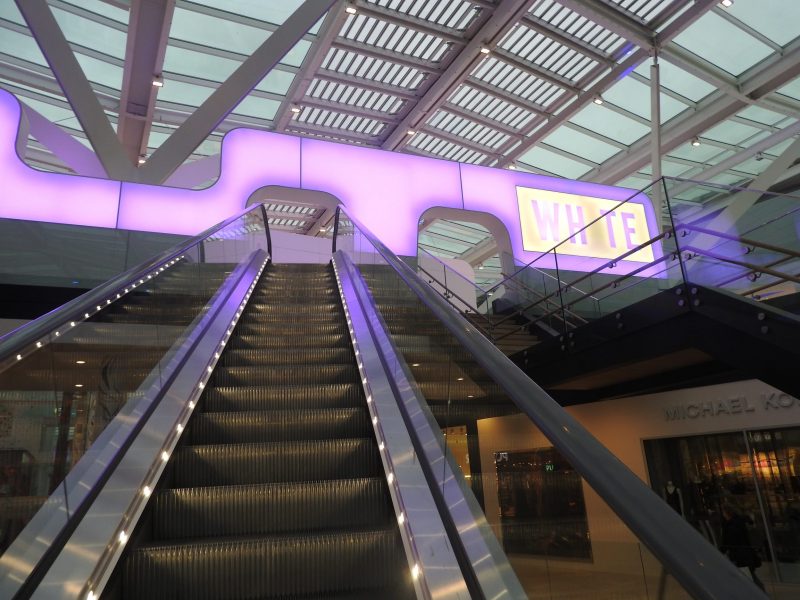 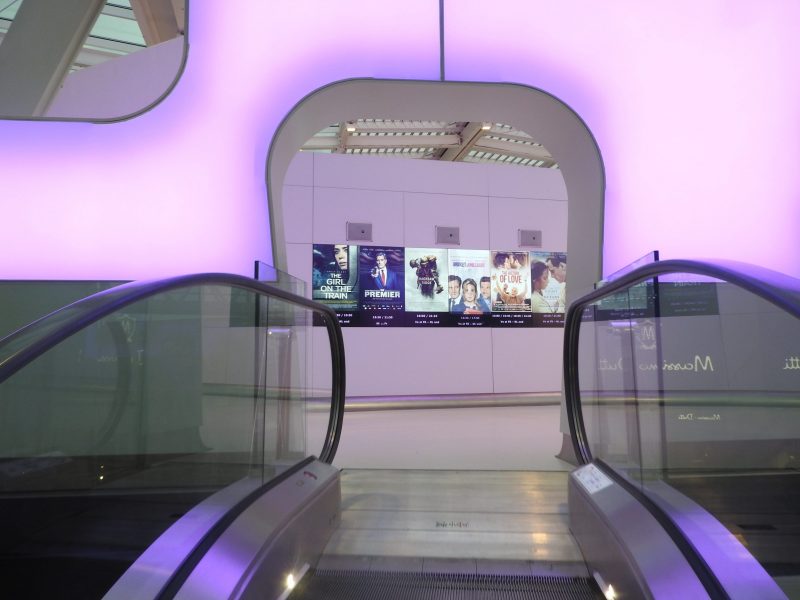 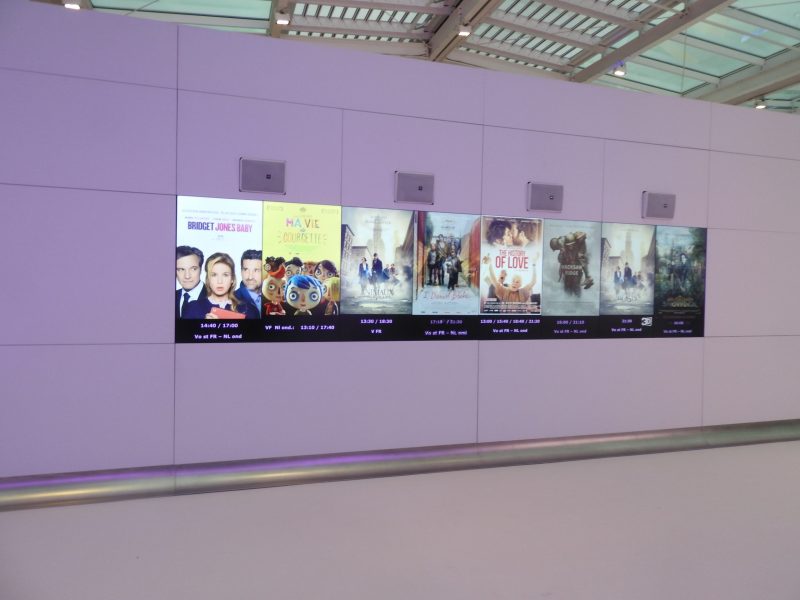 The White Cinema isn’t so much situated on the top floor of the elegantly laid out mall, as perching or floating on top of it. This impression is accentuated by the long escalators that seems to have been inspired by Powell & Pressburgs “A Matter of Life and Death”, which Belga Films is old enough to have distributed. These carry you up to a what can only be described as purply pearly gates.

Inside you realise the reason for the cinema’s name is because it is white. Completely white, with the purple colour added as a tinge from LEDs that change hues. The initial impression is something between a hospital and a science fiction space capsule, particularly when you see the white sphere box office that is something straight from “2001: a Space Odyssey”. There were also ticket terminals, which looked no less futuristic.

Chances are, though, that you have already booked your ticket from the cinema’s slick website. “Discover Day after Day the New Features on Our Website! We are continuously optimising it” promises the online presence of the White Cinema. This theatre realises that these days cinemas live in both the physical and online world.

Moving past the space pod, sorry, box office, you enter the spacious bar area that is the centre point of the cinema. This is a bar that seems longer than even the one at the former Empire Leicester Square in London. There is a variety of snacks, food  and a “vast selection” of drinks – both soft drinks, coffees and alcoholic beverages. The food is gourmet snacks (“fresh, bio, farm products”), whether savoury or sweet, because it would be a crime to have bad chocolate in Brussels.

If you are looking for nachos or popcorn, whether freshly popped or packaged gourmet, you are out of luck. You will no more see popcorn in the White Cinema than you would on the deck of the Starship Enterprise. Jerome Bethune, co-Managing Director of Belga Films explains, “We searched a lot for packaging that does not make noise and/or no odour either. I think people want to be in a cozy atmosphere and do not want to be bothered by this stuff when they’re in the cinema.“  Cinephile haters of noisy concessions (we’re looking at you, Mark Kermode) rejoice. This is your dream cinema.

The staff are all friendly and efficient. But they also walk around somewhat bemused, as if they were extras for a romantic comedy who had implausibly and without script found themselves landed on the set of a science fiction movie. Without a director. It would have been interesting to observe the cinema and its staff at a busier time, (the CJ Cinema review team never seems to find itself in a cinema on a busy weekend) but there is no question that attention has been paid to every detail, including staff training. 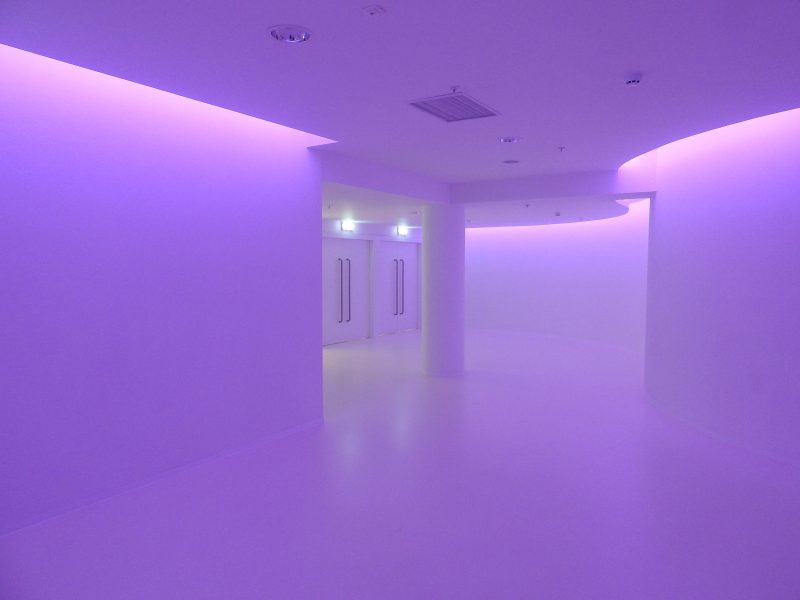 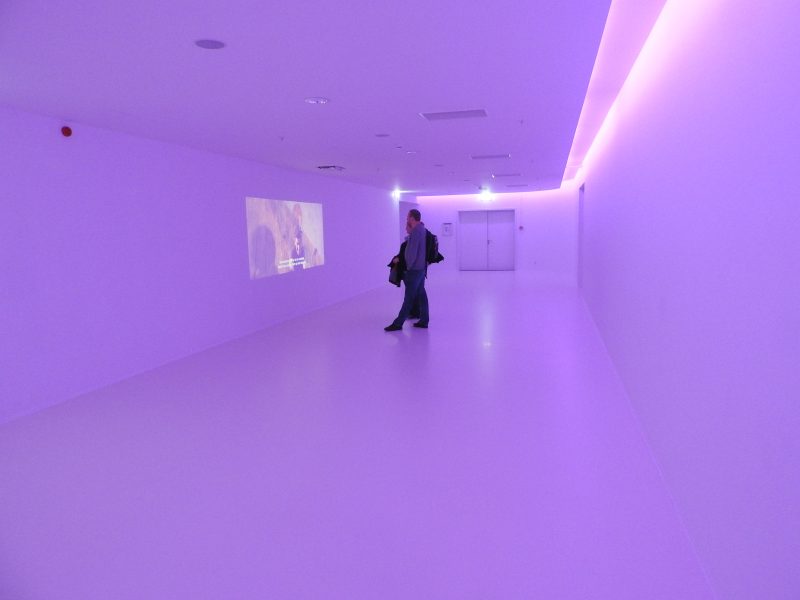 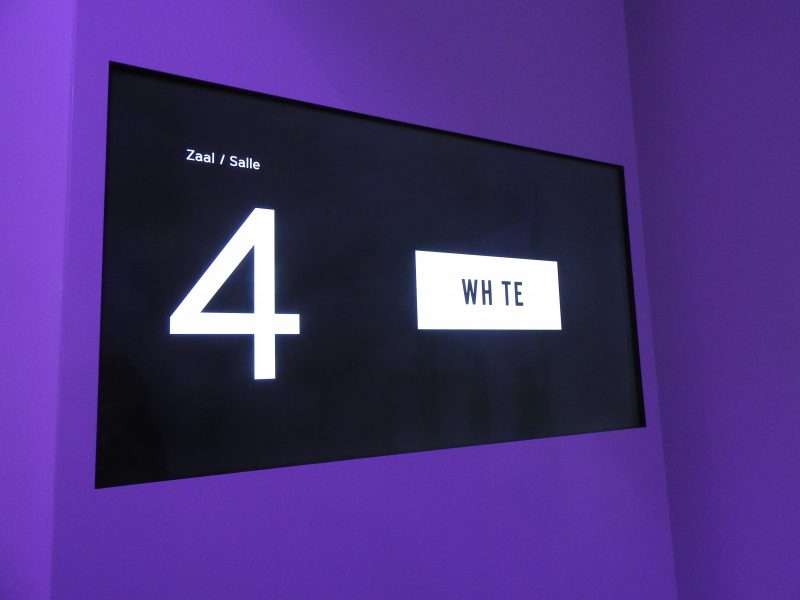 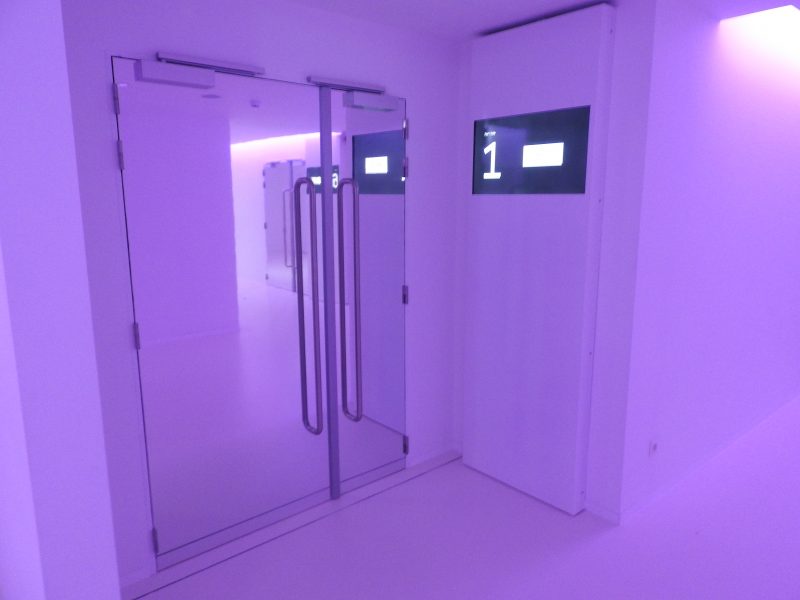 Proceed past the concessions cart – which very likely never gets wheeled into one of the eight “human sized” screens – and you’ll find yourself in a corridor that makes you question your senses. There are no sofas, no standees, no posters, nothing in fact that you would expect to find in a multiplex hallway. The solid white surfaces are all bathed in the same ethereal light, while the doors are all-mirror covered. (Sadly the doors don’t glide aside with a slight ‘woosh’ when you approach them.)

The trailers projected onto the side of the wall, the small screens that indicate the auditorium and the perplexed patrons wandering around are the only things that break up the purple dream. This is not a hall where you are meant to make yourself comfortable as you linger, but rather to float through on your way to the screen of your choice.

The cinema halls themselves are reassuringly more traditionally designed. The armchairs are large and comfortable while the projection and audio are both top quality – as you would expect from a new cinema. Exit lights do not distract (always a sign of good design). The major design point is the circle in the ceiling that serves as illumination between shows.

Once the film (“Fantastic Beasts and Where to Find Them” – with dual Flemmish/French subtitles) started you forget the design of the cinema and simply enjoy the film. Sadly there was no time to linger in the bar or on one of the seats in the public area around the box office, but down the long escalators and out for the long trek to the nearest train station connecting this part of town with Bruxelles Midi/Zuid.

White Cinema sometimes spells its name ‘WH TE Cinema’, as if to remove the ‘i’. It could be seen as a removal of the ‘i’ of iPhones, iPads and other iScreens distracting us from the big cinema screen. Yet it is clear that the White Cinema has applied as much of a thought through design aesthetic as any Apple store.

It is hard not to admire the White Cinema, what it represents and tries to achieve. Those living in Brussels could be understandably tempted away from the Kinepolis and UGCs (particularly the sad UGC in Galerie de la Toison d’Or!) to make the journey out to Docks Bruxel. It is a cinema trying to not just imagine the future, but to be that future too. It’s just that I’m not sure I want to be part of a future where popcorn is banned.

Celluloid Junkie selects the CJ Cinema of the Month based on our own independent survey. We always pay for our own tickets and popcorn (when there is popcorn!) and visit the cinema in a ‘mystery patron’ capacity in most cases. Whenever possible we take our own photographs of a cinema in lieu of corporate stock photos. Thus, sometimes you get authenticity at the expense of focus. Our impressions may be subjective, but we always try to be fair and factually accurate in everything being presented about one of the cinemas we have chosen.