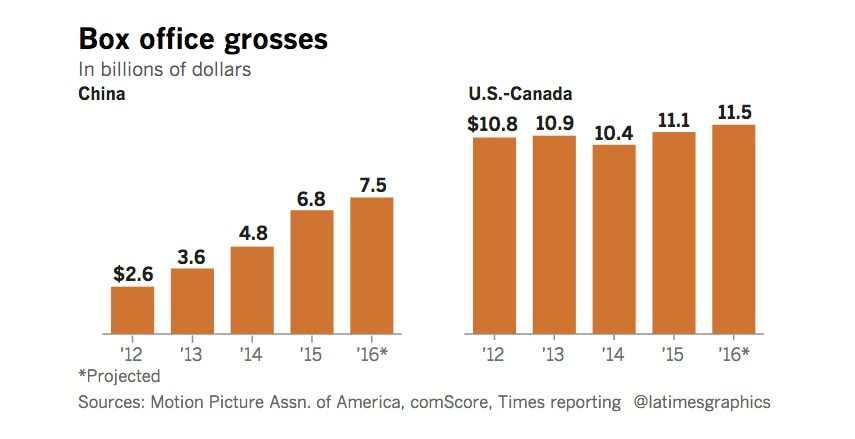 China (P.R.) – Box office fatigue is setting in across China, challenging expectations that it will imminently overtake the United States at the box office. A slew of underperforming titles (domestic and US), an end to nine ticket subsidies and saturation in the most profitable urban markets are all to blame. Wanda’s Chairman strikes an optimistic note as results from his company stay positive, but for those of us who have been cautioning for years that the Chinese cinema miracle is too good to last, this hardly comes as a surprise. Los Angels Times – 24 October 2016 UK – Curzon’s CEO Phil Knatchbull gave a long talk at the Screen Exhibitor’s Forum where he predicted that cinema admissions are set to decline in five to ten years, but that his own chain is still busy expanding its screens. He will also not repeat the Netflix day-and-day test that they undertook for “Best of No Nation” and revealed several other gems. Screen Daily – 21 October 2016

India – PVR’s Q2 profits dropped 43% to INR 23.35 crore (USD $3.49 million) even as revenue rose 12% to INR 529 crore (USD $79.12 million). Year-on-year operating profits could fall by 4%, though F&B revenue is a bright spot with 15% growth and advertising as much as 24%, slowing the impact from fewer spectators based on weaker film slate. But analysts predict a strong performance by spun-off Cineline India, which owns nine multiplexes in Mumbai that are leased to PVR. Money Control – 27 October 2016

USA (KA) – AMC has previewed its Q3 results, which are looking up on a year ago overall.

UK (Scotland) – Cineworld has launched its first VIP Cinema in its Glasgow Renfrew Street multiplex. The VIP experience offers unlimited gourmet food before the screening, with recliners in the auditorium that also has table service for drinks. Tickets cost GBP £30 (GBP £19 for Cineworld Unlimited members). The screen has had 287 guests so far and a corporate party of 52 people. Evening Times – 27 October 2016

USA (FL) – Seating capacity in Benton Harbors Celebration Cinema will shrink from 2,500 to 1,000 with the introduction of luxury recliners next year. The cinema will have reserved seating and the prices will not go up. WSJM – 27 October 2016

USA (MN) – Midway Mall Cinema 9 will get recliners when it changes ownership, with Cinema Entertainment Corporation (CEC) taking over the multiplex and refurbishing it. Plans for 2017 include “reclining electric loungers and other major revisions to each auditoriums, including new flooring, new screens and new wall materials to help enhance the movie-going experience.” Voice of Alexandria – 27 October 2016

Malaysia – The Coca-Cola Company has signed a new beverage deal with Golden Screen Cinemas (GSC). The two have been partners since 1987 and the new deal extends that for a further five years. “The signing of agreement marks our long-term business partnership with Coca-Cola, which is a special milestone for GSC as we are celebrating our 30th anniversary next year,” said GSC’s CEO Koh Mei Lee, who is this years Exhibitor of the Year at CineAsia. Marketing – 27 October 2016 USA (TX) – Alamo Drafthouse has expanded its “Baby Day” screenings to be more ‘sensory friendly’ and welcome guests with autism and also have a greater number of screenings under the “Alamo For All” scheme. “‘Alamo for All’ screenings are for anyone who wants to enjoy a day at the movies and great Alamo Drafthouse food and beverage but needs a little wiggle room on our regular policies,” said Amy Averett, Alamo Drafthouse Director of Family and Community Engagement. Press Release – 28 October 2016 USA (KA) – AMC will be hosting Election Night Parties in its cinemas across the US. To avoid fights between Clinton and Trump supporters, the cinemas will be divided along partisan line into 50 ‘Red’ and ‘Blue’ theatres across 25 markets, with two in each, under the AMC Stubbs scheme. It would be fascinating to have the data on Red v. Blue concession sales – which one has diet drinks and which one buys nachos. Press Release – 24 October 2016

USA (KY) – Crowne Point Theatre plans to open a nine-screen multiplex in Elizabethtown, Kentucky in the late fall of 2017. The cinema will feature a “lounge area where beer and wine is served, a game room and three party rooms, as well as reclining seating, reserved seating and self-serve ticketing,” as well as a concierge service. The News-Enterprise – 28 October 2016

New Zealand – New images and details have been released of the planned Hoyts cinema in central Christchurch. The eight-screen complex will mark the return of a multiplex to downtown Christchurch since the devastating 2011 earthquake. “The three-level complex will have a food precinct on the ground floor with 16 dining outlets, two very large cinema screens and two screens featuring luxury seating and food and drinks service.” This is the first Lux service outside of Auckland and Hamilton. Opening is set for May 2018. Stuff.co.nz – 27 October 2016

Japan – Ion Cinema will open a multiplex in Tokoname next summer. The nine-screen cinema will be located in an expansion of the Tokoname mall on the West Bank Chita Peninsula. Ryutsuu (JP) – 27 October 2016

We’re playing on the idea of a sex cinema and this will be quite different taking a conceptual approach with films to be thought over rather than lusted over.

“When we visualise sex and the moving image it is pornography that most people will think of but sex can have a higher value than that. You don’t have to come in a leather mac to watch these films.

Films on show include “The Last Peep Show in Soho” by Edith Bergfors and “Angels” by Sarah Baker, “whose film is inspired by the novels of Jackie Collins.” Popcorn and drinks, but presumably not tissues, will be for sale. Evening Standard – 26 October – 26 October 2016