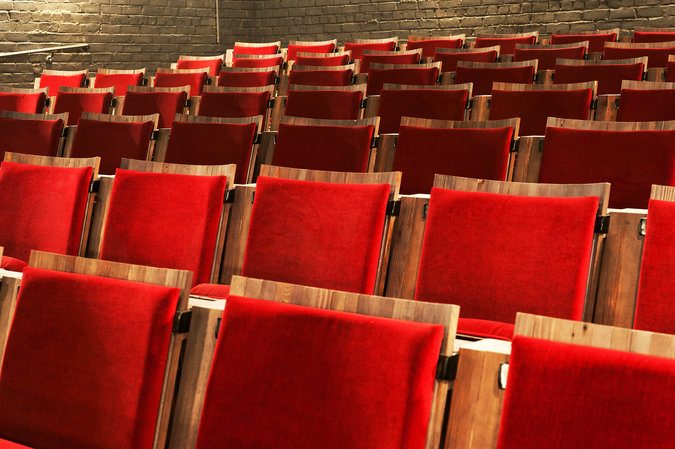 USA (NY) – The New York Times has a long article looking at the revival of art-house and particularly repertory screenings. In NYC there is a boon of new screens, such as the Metrograph on the Lower East Side, the refurbished Quad in Greenwich Village and the Alamo Drafthouse in Downtown Brooklyn, all of which have at least a partial focus on screening classic films. In addition to these and other New York cinemas, there is the opening in the past year of the Cinéma Les Fauvettes in Paris and the Regent Street Cinema in London, so much so that we start to ponder Carrie Bradshaw style, are old films the new way of being a true cineast. New York cinemas certainly seem to believe in the cinema as a social experience. New York Times – 2 March 2016

UK – Social booking platform Ourscreen has added 19 Vue cinemas to its network. Our screen offers a library of 400+ titles in 57 UK venues across 21 cities, include Picturehouse, Empire and individuals sites such as Derby’s Quad and London’s Genesis Cinema. Screen Daily – 2 March 2016

Israel – Rishon LeZion is the best place for film lovers in Israel. This infographic shows Israel’s forth-largest city overtaking cities like Haifa for total screens, though Jerusalem is also on the way up. City-centre cinemas declined in the 1990s but the growth of malls and multiplexes has re-invigorated screen count, for those ready to travel to catch their films on the big screen. Jerusalem Post – 25 February 2016

Germany – A Facebook storm has brewed over aggrieved parents whose 15-and-younger children were refused entry to the 16-rated “Deadpool”. Apparently some youngsters as young as 14 were admitted while others were shown the door. The cinema maintain that it is enforcing the 16-minimum without discrimination. NeueOZ(DE) – 29 February 2016 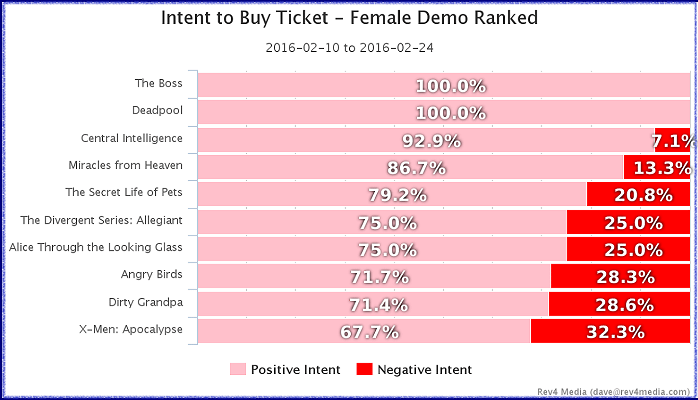 USA – Here is a fun bit of data analysis of female cinema ticket purchase intent based on trailers, done by Dave Young. This ties in nicely with our article earlier this week on Movio and female audiences being under-served.

What’s interesting is to compare the Intent to Buy with the Sentiment data. According to the data, females are relatively consistent between their overall opinion of a trailer (Sentiment) and their decision to actually buy a ticket to see a movie!

So more proof, if proof is needed, that distributors and cinemas should do more to cater to the female demographic. LinkedIn – 25 February 2016

Germany – Kino- und Kulturverein has held its fifth Cine-Dinners. A five course meal is served with a special movie. Starters are in the lobby and the five-course meal then continues with the film. The menu sounds tasty: Lentil soup with bacon followed by Mangold cheese dumplings with tomato sauce, then Skrei fillet (a Norwegian cod) is served on beetroot with walnut dressing. Russelsheimer Echo (DE) – 1 March 2016

Japan – Is the “unprecedented violent seat shaking” to much for you, when enjoying the 4DX version of “Girls & Panzer theater version”? Cinema Sunshine Heiwajima is issues a ‘viewer discretion’ notice for those for whom it may be too much. It has already been used for the 4DX screening of “Mad Max: Fury Road”. We detect a hint of William Castle in this warning. Inside (JP) – 1 March 2016

France – French comedy “Pattaya” has been in the news for the wrong reasons. Two cinema operator have cancelled screenings because of too much rowdy behaviour. Police were called in to the cinema in Vernon dans l’eire to evacuate the auditorium. Earlier there had been an incident in the Versailles (Yvelines)cinema too. France has a reputation for troubled screenings, including the “Sinister 2” and “Annabelle”.

UK – While it’s current Tell No One film is underway, Secret Cinema has just announced its next mega-production to follow “Back to the Future” and “The Empire Strikes Back”. This time it is Danny Boyle’s London-set zombie epic “28 Days Later” showing 14 April-29 May. Tickets go on sale this Thursday at 1pm at prices of GBPO £64.50 for regular or GBP £129 for VIP. NHS staff, armed forces, teachers and student card holders are entitled to Wednesday-only concession tickets for GBP £40. Run, don’t shuffle! Londonist – 2 March 2016

UK – More proof about the importance of training cinema staff in first aid. Cleethorpes’ Parkway Cinema staff saved a man who suffered chest pains during a cinema screening. The emergency kit with the defibrillator was bought in an d member of the audience also had medical experience and helped until the ambulance arrived. The rest of the audience were understanding and rewarded with tea and coffee for waiting. Grimsby Telegraph – 29 February 2016

Japan – ‘Sleeping Bag cinema’ is the latest idea for Japan. No jokes about the price of cinema tickets (the highest in the world!) making Japanese people homeless, please. The idea is to enjoy a film like “E.T.” in a dry riverbed at night. Admission is free for children and grown-ups. Cinema PIA – 4 March 2016

France – Age restrictions are being tightened for films with “non-simulated sex” in France. In the future it will always be rated 18 based on the latest announcement from France’s Minister of Culture Audrey Azoulay. The move follows pressure from Catholic organisations. “Love” and “La Vie d’Adèle” are two films that provoked the heated debate. SudOuest – 29 February 2016

France – It’s not just “non-simulated sex” but also wolves on screen that seem to cause office in France.  The Mercury cinema in Nice, which is managed by the County Council of the Alpes-Maritimes, has pulled a documentary about wolves after an ‘injunction’ because the subject is “sensitive issue in the region”. (Update: the screening is apparently back on. “There was never any question of the deprogramming. There was a communication problem, a misunderstanding,” we are now told.) 20 Minutes – 2 March 2016

UK – A mother-of-three quit her job and spent GBP £20,000 0f her own money to launch her own mobile cinema and events company.

Victoria Hill decided it was time for a change when she turned 40 and became ill with kidney disease.

She set up Spectrum Screen Events which shows movies at village halls and runs events including bingo.

Mrs Hill, from Coggeshall, said: “Turning 40 and becoming ill were the wake-up calls I needed.

“I have three sons, two of them are autistic, and I wanted to create something they could join me in when they’re older.

We applaud her effort and wish her every success. B&W Times – 3 March 2016

UK – The company behind Hot Tub Cinema and Pillow Cinema are looking to re-open the former Castle Cinema in London’s Hackney borough. A Kickstarter campaign has been launched to raise the GBP £45,000 needed this gem that’s been closed for 50 year. Time Out – 1 March 2016

Italy – According to the Guiness Book of Records, this is officially the ‘Smallest Cinema in the World’, located in Rome’s Villa Borghese.

How could it be otherwise, the auditorium is called the Cinema dei Piccoli , ie small cinema. Not only because the place is like a pillbox, but because the film was born and still specialized in films for young audiences . The mini room is located in Rome, in the stately Villa Borghese park, and is an institution. It was built in 1934, during the fascist Mussolini ‘s Italy

“It was established as a propaganda tool , ” says Roberto Fiorenza, which now owns the cinema with his wife, Caterina Roverso. Both are responsible for the management of the room since the eighties. “It was more than a place to leave the kids parked and not disturb” he explains. A kind of chiqui park today, but adapted to the times.

As well as showing children’s films it also provides screenings for the blind and deaf. 63 comfortable seats to chose from. El Mundo (ES) – 27 February 2016