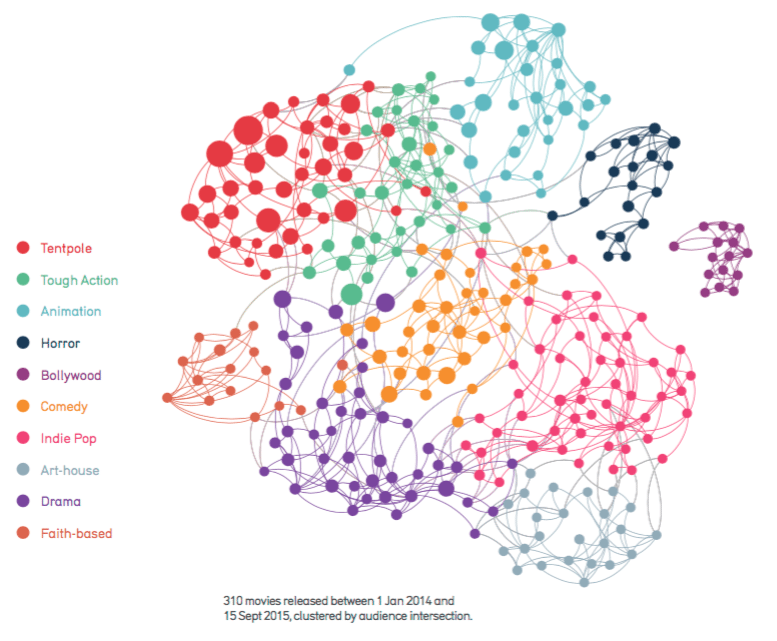 Data analytics specialist Movio has published a White Paper giving deep insights into female cinema goers preferences and attendance patterns. The study points to a significantly under-served demographic, representing an opportunity for both distributors and exhibitors.

The methodology used by the Movio Media Research platform involved sampling attendance between 1 January 2014 and 15 September 2015. This tapped into the data capturing demographics and moviegoing history of over eight million moviegoers in North America. Using a Similarity Rating between two pairs of movies consideration it looked at the likelihood of of the size of the audience intersection for the given pair of movies.

Without going into too much technical detail, this created a dataset containing 310 movies released during the period in question, resulting in ten clusters of movies as seen above. Take a moment to study it. Bollywood films are an island of their own, while Horror movies are a peninsula stretching out from Tough Action and Indie Pop and Faith Based films share a land-bridge to Drama.

Not surprisingly Tentpole was the single most popular cluster with an average 37% preference value, followed by Animation (16%), Drama (14%), Comedy (14%) and Tough action (11%). This means that for people who saw a Tentpole film the likelihood that the next film they would watch is also a Tentpole was roughly two in five. Next up the researcher (Bryan Smith, Chief Data Scientist for Movio) identified clusters and subclusters that were overrepresented in the preferences of the niche group. This eliminated Animation films that are also blockbusters (Minions, Inside Out) and Tough Action (another blockbuster category), leaving just ‘Dramas Appealing to Female Baby-boomers’ and ‘Comedies Appealing to Millennial Women’.

The 23 movies in the sub-cluster included titles such as ‘The 100 Foot Journey’, ‘Gone Girl’ and ‘The Imitation Game’. Movio also collected budgets for these movies and North American and international gross, where available, which came to an average budget of USD $20 million and average world-wide gross of USD $73 million. It found that:

In order to profile the audience for this genre, we selected only the moviegoers from our sample that saw at least two movies within the subcluster. This group comprised ~13% of the total sample, had an average age of 55, and is 59% female. On average this group goes to the movies almost once a month, and prefers to go early in the day (54% of visits before 5pm, compared to 42% for the total population).

Meanwhile the Comedy sub-cluster consisted of 12 films (Spy, Trainwreck and – ahem – Fifty Shades of Grey), with average budgets of USD $33 million and global take of USD $191 million, with average gross-to-budget ratio of 6.3, compared to 4.1 for the previous sub-cluster. Here it was found that:

The group of moviegoers that saw at least two of these films made up ~13% of the total sample, had an average age of 38, and is 60% female. Like the group above, these moviegoers go to the movies almost once a month, but they prefer to go later in the evening, with only 34% of visit before 5pm. It is also worth noting that while the overall audience for this genre is predominantly female, the subcluster does include some more male-focused films such as Neighbors and A Million Ways to Die in the West.

The question asked based on these two sub-cluster findings is whether studios, but also exhibitors, should “shift some of their resources to targeting women in order to increase box office success?” Women are typically in charge of household financial decision sea interestingly 60% of loyalty card holders are women. Furthermore they are the ones responsible for introducing children (a.k.a. the Next Generation of Cinema Goers) to cinema, making up 57% of animated film audiences.

Encapsulating the findings and conclusions neatly in two clusters of bullet points, Movio affirms that:

We identified two clusters of movies with the following characteristics:

In this context it is worth highlighting that films with a more predominantly male appeal have an average Gross to Budget Ratio of 2.3 while female ones have an average of 5.1, i.e. more than twice as high. Even the superhero sub cluster only manages a ratio of 2.9 while female-focused action sub-cluster films such as “The Hunger Games” manages the significantly higher 4.4 average.

As the White Paper notes, “This suggests that a shift in focus towards producing and marketing films to women could pay off not only in incremental box office, but in blockbuster returns as well.” While this has primarily implication for film producers, it should also help cinema chains in terms of programming and targeting.

With Big Data becoming ever more important to target sub-groups of cinema goers, rather than emailing out standardised mass-circular email newsletters and special offers, exhibitors need to learn to love their cluster and finding way of making that afternoon slot even more appealing for the 55-year old soccer mom and creating a great ‘Girl’s Night Out’ for that group of 30-something career women.