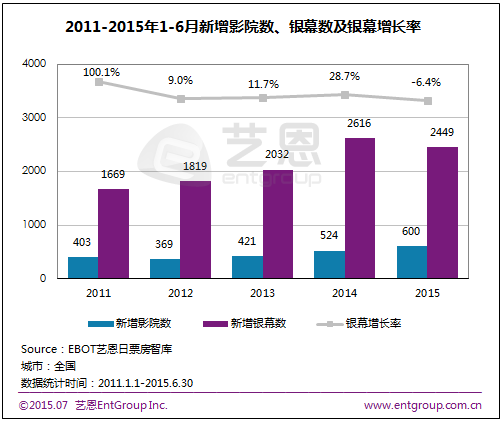 New data released by Ent Group shows that while the growth of cinemas in China continued in the first half of 2015, the pace of growth is slowing significantly.

According to Ent Group the first six months of 2015 saw an addition of 600 new cinemas with 2,449 screens, putting the total in China at 26,244. This is an average daily growth rate of 13.5 screens. Yet even as Chinas box office is breaking records, a slowdown in cinema growth points to a potential deeper malaise. Because the rate of China’s cinema growth is slowing, both year-on-year and month-on-month.

The year-on-year screen growth fell by -6.4%, having increased 28.7% in the previous period. The average number of screens per site also declined, coming in at 4.08 in the last six month period, compared to 4.99 in the comparable previous period. This is most likely a result of smaller multiplexes constructed in tier-two and -three cities, another indication that the cinema building boom could be running out of steam.

What is perhaps most troubling is the 2015 month-on-month decline in the number new cinema and screens added. Starting from a high of 126 cinemas and 567 screens in January 2015 this declined even single month (with the exception of February) to just 79 cinemas and 342 screens in June, as seen in the chart below.

Furthermore, statistics for July show that only a further 54 cinemas were added that month with a total of 295 screens, also representing an all-year low (though higher average of 5.46 screens per cinema). This means that an average of “just” 9.5 screens per day were opened last month. 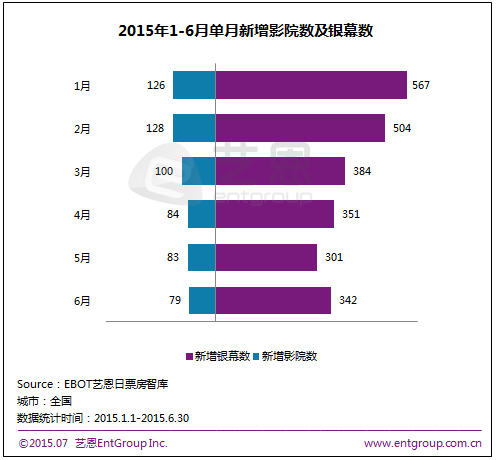 While some of this is seasonal, when put within the context of the larger economic issues and the factors underpinning the box office boom, this is a troubling long term indicator. These statistics have been largely overlooked by the focus on China’s record box office, which during the same period grew 48.82% to CNY ¥202.2 billion (USD $32.57 billion) and provided some monster-size domestic hits. However, the box office is heavily skewed to a small proportion of high-end cinema (and Imax/PLF installations), primarily in tier-one and tier-two cities.

Of the country’s 26,000+ screens, the Top 100 cinema sites accounted for 14% of China’s total box office, with the Top 500 accounting for almost half (42.8%) of the national BO. Wanda was the biggest exhibitor with 14.3% market share, with the three largest exhibitors capturing 30.9% of the national box office and Top 10 accounting for 76.7%, or more than three-quarter. There is thus heavy concentration but also fierce competition between a handful of operators. Notably the highest performing individual cinema is not a Wanda cinema, but the Jackie Chan International Studios in Wukesong.

Beijing topped the nation in terms of ticket price during the first six months of 2015 at CNY ¥46 (USD $7.41), exactly CNY ¥10 (USD $1.61) higher than the national average. However, in July the Beijing average fell to CNY ¥44 and the national average was down to CNY ¥35. While this is a small decline, coming as it does during a busy period, it shows that competition is intensifying and depressing cinema ticket prices.

It is too early to tell whether this downward trends trend is a temporary phase or a longer term decline. The busiest time in Chinese cinemas tends to be Chinese New Year (a.k.a. Spring Festival) in February, which saw the largest number of new screen openings this year and may also do so in 2016. There has also been confident predictions that Chine could achieve 100,000 cinema screens by moving beyond over tier-four cities and tapping into the rural population of 700 million that currently has no access to modern cinema facilities.

Yet several factors point to a less rosy scenario. A recent report looking at the link between cinema and shopping malls (80% of new malls in China have a cinema) demonstrated “the overall box office growth in Chinese cinema mainly due to the extensive construction of a new theater drive,” rather than a growth in attendance. Given the concentration of box office coming from relatively few high-performing cinemas, adding more cinemas will not increase box office at the same pace. Put another way, a further 74,000 screens in addition to the existing 26,000 will not quadruple box office in China; at best it will double it.

Added to this the fierce competition by BAT and other on-line ticketing majors is likely to see the proliferation of over-subsidised smartphone ticketing, a slowdown in the overall economy and the China stock market melt-down last month. Even Wanda has lost some of its sheen, with questions about insider trading surrounding its most recent domestic acquisitions, even involving the Chairman’s wife.

If the trend of fewer and fewer cinemas opening continues to the end of the year it may be time to revise the predictions of when China will overtake the United States in terms of box office.