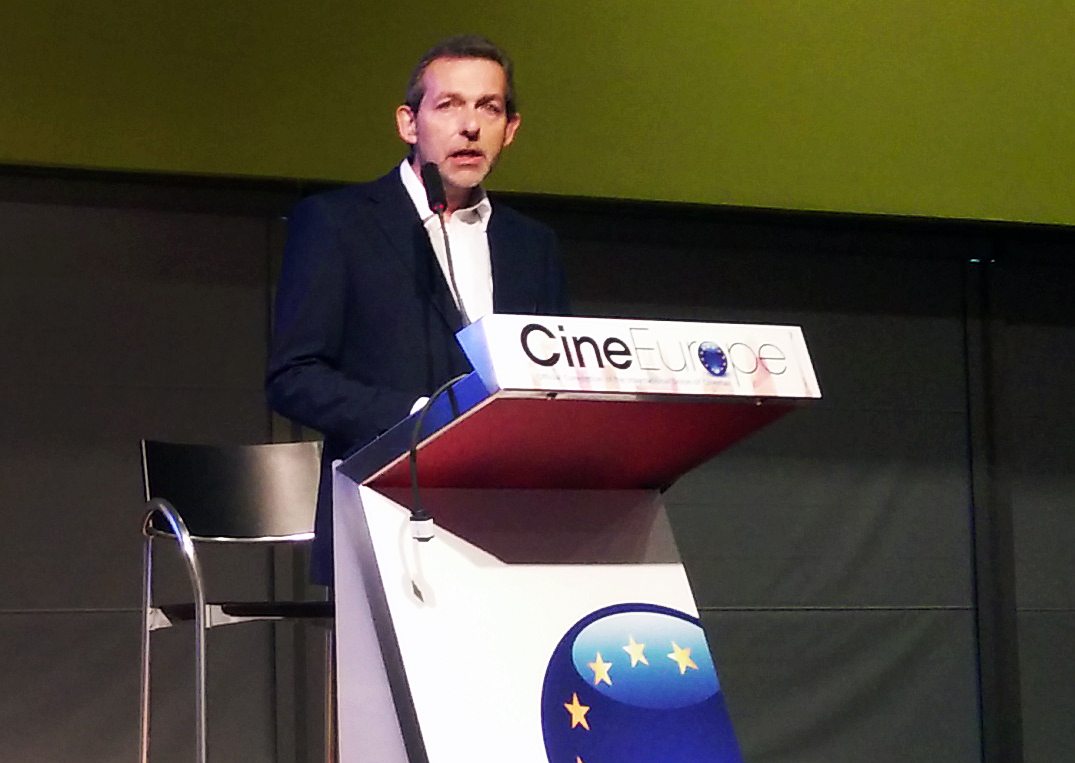 The first day of CineEurope, before the official opening ceremony Prometheus Global Media Film Expo Group, the show’s producer, traditionally holds several educational seminars and panel discussions centering around trends and subjects of interest to the worldwide exhibition industry. This year was no different as just before lunch a panel was convened to discuss an emerging new trend in cinemas; interactive pre-shows.

Moderating the panel was Mark de Quervain of Action Marketing Works, a branding and marketing consulting firm based in the United Kingdom.

“I want to change to the program, ditch the term ‘pre-show’, because when you see what these companies have to offer it will broaden your idea of what audience engagement is,” said de Quervain while introducing the session. Before inviting Adam Cassels of Audience Entertainment to the podium as the first presenter, de Quervain informed attendees that he wanted to take questions throughout the panel.

Mr. Cassels heads up marketing for Audience Entertainment, a company that has been working in interactive pre-show for some time. You might recall, just before CinemaCon in 2014, the company partnered with Barco to install it’s technology in a network of cinema locations.

“My favourite thing is that this is not just about the pre-show and there are now a lot of companies doing interactive pre-shows,” Cassels began. “We have finally reached a tipping point in doing it. Last year at CinemaCon we launched Interactive Dimension [iD]: Motion, Sound and it is also mobile now. I’m in good company with the other people on the panel. We are now going to get people to use their mobile phones [in theatres] rather than switch them off. Our system is WiFi-based, which means that there is no app to download and it gets people interacting immediately.”

Cassels then provided an example of what he was referring to by playing a video which showcased the Audience Entertainment platform in action.

“We’ve talked digital as a trend for a long time; we are now talking about interactivity as a trend,” he said. “Interactivity in TV has been going on for some time. Now we have a format and audience acceptance. Audience Entertainment is turn-key and work with all major platofrms, even though we [primarily] work with Barco.”

“It’s been a great year,” Cassels proclaimed. “We’ve launched 100 screens with Screenvision – installed in 100 days – and a great campaign to end smoking. We did our first major billboard in Time Square in New York for music. And we helped launched a gaming platform in partnership with Microsoft at South-by-SouthWest.”

Audience Entertainment has also launched a software development kit (SDK) so that developers can make their own applications for the platform. This is analogous to when Apple lunched the iPhone,” Cassels explained. “They had no idea that Uber would be spawned by it one day.”

“There is a new format: 2D -> 3D -> iD. The audience will determine the demand,” Cassels said in wrapping up his presentation. “Think about how the experience can creep into the show. We look at Barco Lobby and Christie Experiential Network. It is going to be full interactivity: Motion, Sound and Mobile. During the Oscars interactive poll the audience clapped the loudest for ‘American Sniper’. This platform is for today’s audience.”

Up next was Mr. Evea, the COO of Cinime, which started out in 2010 as Yummi Media Group. The company creates interactive content, games and competitions specifically for cinemagoers. Beyond pre-show programming, Cinime strives to be a sort of second screen for movies, providing interactivity before, during and after a movie. The company has created an app that connects the audience in the auditorium, the lobby and beyond.

As Evea explained it, the app offers, “audio matching, visual (for augmented reality such as scanning posters), time sync (to message audience members at specific moments during content playback) and location (so the company knows where people interact). We have four offices worldwide. 14,000 cinema screens.”

The company is based in London, with four international offices. Cinime’s technology is now deployed on 14,000 movie screens according to Evea. “Connecting an audience to their environment. Connecting brands and studios with the audience before and after the experience,” said Evea of Cinime’s goals. “Changing the three hour cinema visit to a three month connection.”

“Our strategy is: Investing in marketing, content and technology,” he detailed, before showing a clip with examples of the content they have produced to date.

Like Audience Entertainment, Cinime has released an SDK for developers who want to build applications for the company’s platform. One nifty feature Cinime offers through its mobile app is the ability to tag any movie trailer.

Fresh off a successful mass-demonstration at this year’s CinemaCon, Mr. Hussman, the head of TimePlay, was the last speaker invited to brief attendees on his company.

“We take holistic approach to building our platforms and games,” Hussman said. “It is early days in interactivity and it is time to embrace it today.”

Like other presenters, Hussman played a short video highlighting his technology being used in the field. “Billions of people are addicted to interactivity and Timeplay helps them,” he added.

Hussman says that 87% of audience members come early to participate in Timeplay games and 83% of those polled would recommend the platform to friends and family. In total, 84% of respondents rated themselves ‘satisfied’ with Timeplay.

“We have become part of the fabric of going to the cinema,” Hussman continued. “We have light entertainment, we have sponsored entertainment.” As an example he detailed a campaign titled Revlon Showdown revolving around the perfect movie kiss. “Game templates have been developed at low cost to keep things dynamic.”

“We have invested over $50 million dollars in creating interactive ads,” Hussman said, going on to show some examples through more clips.

He also introduced the company’s rewards program MyStuff, for those who may not have already been familiar with it from the CinemaCon demo, “MyStuff has a 35% average redemption rate, and is increasing concession sales by 2% for our cinema partners”

In regards to Timeplay’s technology, Hussman said they have “Four families of patents filed between 1999 and 2014. The United States, Canada and Australia are just some of our major markets, though not all.”

With the presentations (a.k.a. sales pitches) were done, all of the panelists returned to the podium for a panel discussion as well as some audience Q&A.

de Quervain: We have talked about going beyond the pre-show. How transformational do you think that this can be for the cinema industry in the long term?

Cassels: It is a question we should all be asking ourselves. Cinema has changed a lot in the past 100 years. We are trying to bring gaming and brands and films together and that can only be done in the cinema. It means that you can look at the eSports market and interactivity creates that sense of destination.

Evea: Cinema in the future can’t be over-reliant on movies, it has to create content in its own right. Secondly it is about revenue. Cinemas do not see any of the revenue from merchandising for films.

Hussman: I agree. Our focus is film. That is the reason people go to the cinema. We are not trying to compete with film. We’ve built the tools to let the creative community build content for that platform.

de Quervain: Is this a technology looking for an audience or is the demand out there? What evidence do you have that people go to the cinema actually embrace this?

Cassels: We can all tell you compelling statistics from our PowerPoint decks, but you should look outside our industry, look to YouTube, Netflix and gaming. Audiences want choices and ability to control their experience.

Evea: There is not much point going through stats, but it is linked to improving the overall experience. There is a huge opportunity to give people more than they currently get. It is currently a hodge lodge. You are not rewarding the cinema audience for arriving early in the cinema.

Hussman: I will try to go against the grain and offer some stats. We play in front of 1,000s of films every day. We are attracting an average of 40% of the entire audience – that is for every film. The younger you go the higher the number goes. We are seeing redemption rates of 35%. This is early days and we have lots of stats.

de Quervain: In terms of increasing participation, have you guys looked at barriers to entry? What is needed to further enhance and how long will it take to get to those enhancements.

Cassels: Content is king. There is nothing more important. You don’t know which application will work.

Evea: I think that the first barrier is the industry accepting that mobile is here and embrace the fact that it is happening. The more context they provide the more compelling content we can give audiences when they leave.”

Hussman: I agree with all that. We keep in mind the key stakeholders in the value proposition. Each stakeholders’ needs to be met. If you satisfy the consumer, the rest follows. We built a platform that is easy to change. As a company we are also creating our own barriers.

Patrick von Sychowski: Should all of you not be integrating their solution with the exhibitors’ own apps? And who owns the data?

Evea: That is why we developed an SDK. Where it gets complicated is making money from advertising. We are trying to work around it. So if you can integrate it between those two apps it is best. The cinemas own that data.

Hussman: We take the same approach. We recognize that our partners own that audience We are very careful with the data. We stay within the dynamic. We avoid trying to push. When you offer an experience that is pull then audiences engage more.

Audience Question: You don’t play before or switch before a live event broadcast to cinemas because exhibitors are not keen to switch between systems. Is that correct?

Hussman: We are working on something that we will be announced in the next 30-40 days. We are working with partners and complementing existing events.