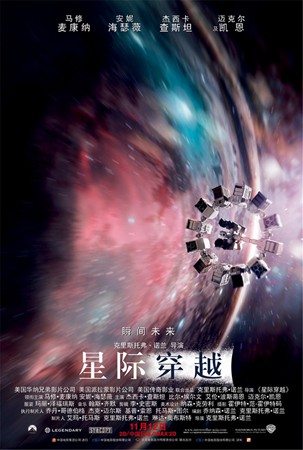 “Interstellar” had a good week at the Chinese box office, boosted by Imax showings and holding off competition from both domestic comedies and Madagascar penguins.

Starring Matthew McConaughey and Anne Hathaway as astronauts trying to save the human race, with an ensemble cast that also includes Jessica Chastain and Michael Caine, Interstellar racked up 7.14 million admissions from 149,316 screenings, according to the research outfit Entgroup.

That was fewer screenings than the second-place movie in the week to Nov. 16, Don’t Go Breaking My Heart 2, but the space film also showed on 170 Imax screens in China, which gave box office a major lift.  LINK

You might also be interested in this article about advance online ticketing sale for “Interstellar”, which set a new record. 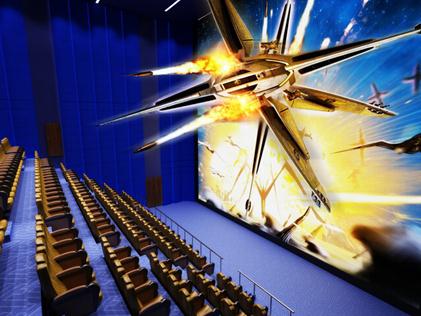 The success of Imax and Premium Large Format films in China prompts Broadcast HC 360 to look at the technology behind Digital PLF, both Imax and its domestic Chinese competitors.

Relative to the IMAX “silent like gold,” the theater construction market is more lively. Cinema operators to invest and build its own brand for use in its own theater, the movie started issuing investment Poly Films, is the development of a domestic IMAX DMR system POLYMAX Poly; Wanda independent development of the giant screen projection system “X-Land “; and in digital cinema technology research-based science and technology enterprises Chen Xing Digital technology introduced in 2013 Cinelab laser IMAX screenings of high-quality solutions. These domestic IMAX brand is undoubtedly herald the birth of the modern multiplex cinema building, will move towards high-quality IMAX hall main trends.

And particularly worth mentioning is Cinelab IMAX innovative laser from the light source to the electro-acoustic to build sound, IMAX is a qualitative leap in technological development milestones. IMAX movies the same environment and needs two Barco 2K projectors can only support up to 2K mode with a resolution of 2048 x 1080 pixels, a contrast ratio of 2000: 1, Cinelab laser IMAX system simply uses a laser IMAX Simply using a Christie 4K projector with a resolution up to 4096 * 2160 pixels, with a 2100: 1 contrast ratio, while the same effect, it is easy to see, Cinelab laser relative to the giant screen IMAX giant screen, the screen resolution increases four times, four times the clarity also increased. Given the high brightness laser light source in the screening process 2D center maximum brightness of up 40FL, and IMAX is 15FL, IMAX 2D laser brightness increased 2.67 times, and further optimize the viewers 2D viewing experience.  LINK 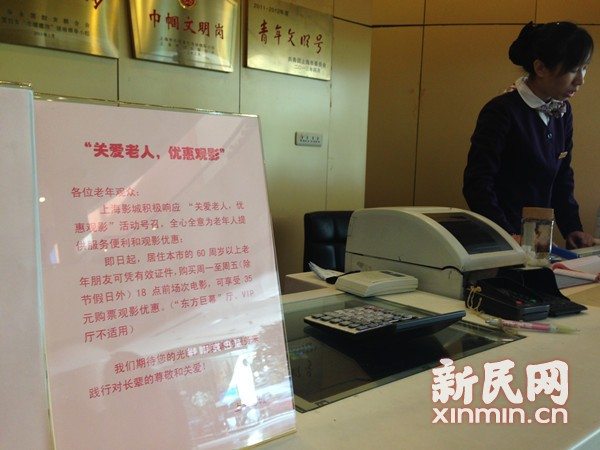 Shanghai has implemented the previously proposed discount scheme for senior citizens (over 60 years of age) in over 100 cinemas. Restrictions apply.

Today (the 14th) show industry associations from the Shanghai Film Distribution was informed today, Shanghai 105 movie theaters joint promotions door open to the elderly: 60 years of age and older who people with valid documents Monday to Friday (excluding holidays) 18:00 previous screenings of the film, can enjoy the preferential fares 35 yuan or less.

Shanghai market price of movie tickets mostly 80-120 yuan each, for many older people, the threshold is too low. To solve the elderly watch movies high threshold issue, the most rational approach is to fare down. After consultation with the city’s 105 theaters, the Shanghai Film Distribution and Exhibition Industry Association initiative to older movies preferential door open: excluding holidays, from Monday to Friday 18:00 before each screening of the film, 60 years of age and older can enjoy less than 35 yuan special price movies. National holidays, special appearances and other activities, IMAX, the large screen, 4D and other special movie theater except as otherwise provided, generally do not enjoy the preferential price of moviegoing.  LINK 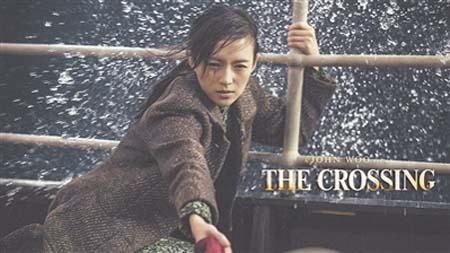 Cinemas in China are starting to sell ticket for films as much as a month in advance, particularly for domestic titles fuelled by social media interest and often at a discount.

When reporters yesterday (the 15th) visited Tianjin theaters understand social media and online shopping combined with the introduction of a new model movie ticket pre-sale, a lot of the popular on-line yet can buy movie tickets a month in advance.

“Step away”, “The Crossing” and other domestic blockbusters upcoming, many fans waiting. These films have become a hot topic of domestic social networking sites, but not reflect the first fire also led to the pre-order movie tickets sales. “Step Away”, “Rush That Year”, “Symphony” and many other films, although only in the mid to late December release, but reporters found that consumers earlier this month by a lot of movies booking site buy movie tickets online seat selection, and provide pre-theater network covers the city’s major mainstream basic video room. Benefits advance ticket is cheap, love special sale price of two movie tickets 49.9 yuan, zero enjoy half-price tickets online seat selection and other activities to attract a lot of young people.  LINK 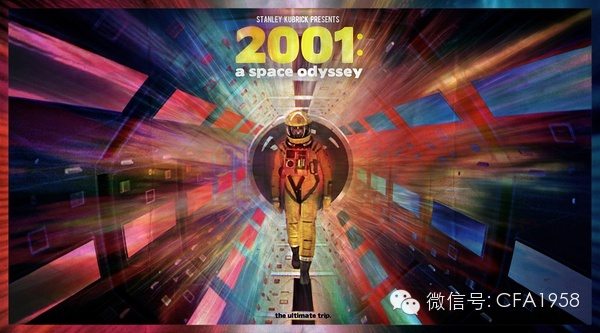 Art-house cinema, cinematheques and revival screenings are slowly taking off in China. This year’s “Stanley Kubrick retrospective” saw lines of up to 200 meters (650 feet) of people wanting to buy tickets. And China Film Archive’s newly opened Beijing Baiziwan screening venue has an attendance rate of 30%-50%, i.e. significantly higher than the average of 15% for mainstream cinema attendance.

In addition to non-governmental forces and government-run business, one called “Rear Window Show” is also a small art film release agent. The organization was founded last year, is headquartered in Nanjing, currently a member of only six people, most of his spare time to promote the “Rear Window screening” project. Last year, “Rear Window Show” play to their strengths in network marketing, word of mouth, “zero cost” was released the documentary “tempered” to achieve 70 cities nationwide, released simultaneously in 300 theaters.  LINK

Cinema advertising is growing at the astonishing rate of 71%, fuelled by the growing number of screens and booming box office.

Data show that the traditional outdoor advertising began to rise in the first three quarters of 2014, an increase of 10%, the majority of the city into a new round of value-added traditional outdoor stage. Commercial buildings video ads also performed well in the first three quarters, spending rose 21%. Cinema video advertising is growing rapidly, an increase of 71%. LINK

More examples of consumer ombudsman taking on cinemas, such as this one that sold 80yuan tickets for 1yuan, but did not inform the buyer that the cinema was being renovated and the tickets could only be used during the trial opening.

Recently, Ms. Xu consumers see a “3D movie tickets worth 80 yuan now only one yuan,” the preferential information buy online, they immediately paid 6 yuan to buy a 6 movie tickets. Originally planned to accompany her daughter to see a movie in high school, can be found in the theater has not yet opened, movie tickets can not be used when access to use.

Buy movie tickets themselves clearly has open group, and still within the site marked valid, Ms. Xu believes this practice sites and theater unreasonable, she complained to the Consumers Association. The understanding, Ms. Xu reflect true. Cinema is still being renovated, is expected to go to trial next month before they open for business.  LINK

A charming take by a Global Times reporter of what it is like for a non-Hindi speaking Chinese journalist to go and watch a Bollywood films, in this case “Happy New Year”. Worth remembering that Bollywood films often play wide in Chinese cinemas and do well at the box office.

“Indian movies like hallucinogens, can people enjoy temporarily detached.” Commented Indian national cinema. Recently, the “Global Times” reporter went to the cinema to watch the Indian blockbuster “Happy New Year” in the feel of this detachment, but also on the work rule Bollywood lines have a certain understanding…

It is in these “outside the box”, Bollywood movies have been able to create a pleasant dream. In “Happy New Year” viewing the scene, the reporter was vaguely see the child in his arms dancing along to the music, will be jumping behind the excitement of an old married couple accidentally spilled popcorn hit his head, absolutely will not listen do not understand the Hindi dialogue and frustration lonely. Faced with the big screen release of color and rhythm, even if you are embarrassed to dance, they can follow emotionally.  LINK 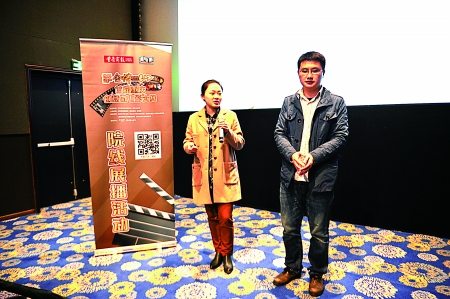 “We are willing to come up with the resources to support the development of micro-film industry, so that we do not like in the movie theater to enjoy a good work.” Yesterday, Poly Million and Chongqing with US theater general manager Wang Xiujun Daily said in an interview with reporters, micro-film Low threshold, popular, is now the most popular movie format. People enjoy the movie theater as the forefront of the world, screenings works of different people, but also make the platform more diversified content screening.

Wang Xiujun said micro-film belongs to the delicacy of a strong image, it’s “language” colorful, in a short time, also give the audience a good visual impact, so that people in the micro-film created by the context, appreciate the emotional story of the director or want to express. With the popularity of shooting techniques and improve in the future it can rival with traditional film. “This partnership with the micro-film contest, to us, is a very good attempt. We also look forward to the help of the popularity contest, enhance the visibility of the theater, and promote the development of Chongqing micro film culture.” Wang Xiujun said.  LINK 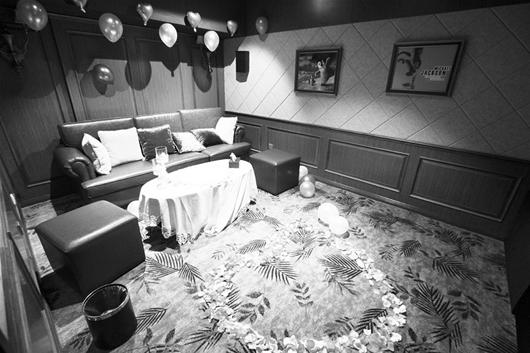 Yet more on the trend in China for personal screening rooms, or ‘Personal Tailor’ cinema, as they are also called.

Selected videos on touch-screen machines in front of the theater, into the bag room, rely on, turns out the lights, you can begin to appreciate you want to see movies, like in her living room. July 18 this year, River City’s first “Personal Tailor” cinema settled Jianghan Road, declaring pick point with the broadcast viewing era is coming. Late last year, the first three-Demand Studios River City will open in Optics Valley.

The box can accommodate 2-8 people, 200 yuan fare box, available on demand 24 hours, in addition to the movie, you can about a few friends, watch a football match here, or live the popular variety show. Reporters learned that the current demand River City theater, although unable to synchronize with the ordinary cinemas, theaters aggressively can not see the latest blockbuster, but the massive film library and customized private viewing service, is still subject to a lot of 80, 90 sought after. Loyal fans love art film students Xiaoshao theater is on demand, “A lot of art films in theaters is hard, hard on, because the box office is not ideal, will soon have to showings.” Here, she can always easily find their favorite art piece.  LINK 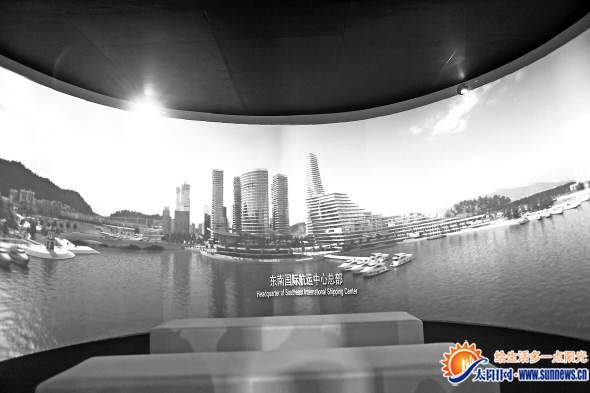 Not a cinema, but a nonetheless impressive 360 degree display projection.

It is worth mentioning that the center of the exhibition for the first time to 360 ° ring screen theater to the audience in the form of visual panoramic display “beautiful Xiamen · together to create” an important achievement, including urban and rural, large bay, big mountain and sea, large garden development strategy, city combining transformation and economic transformation and urban development and ecological construction, such as the combination of the results of a comprehensive interpretation of the “three rules one” and the latest Xiamen city construction planning.  LINK