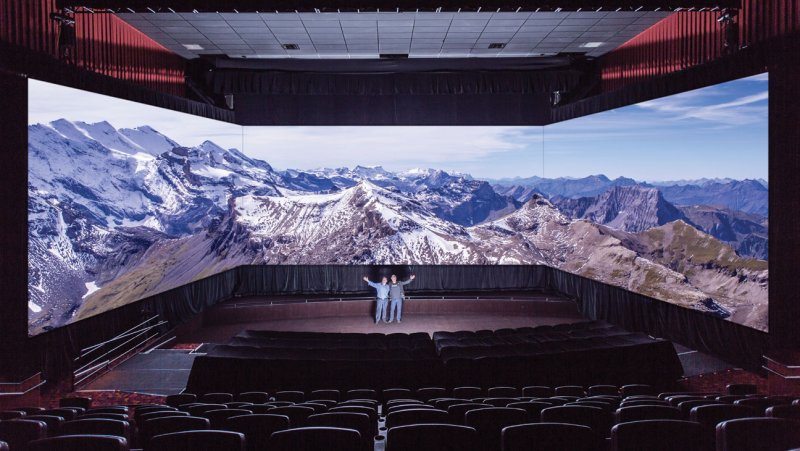 The Hollywood Reporter has a special issue looking at ‘The Future of Film‘, which to a large extent is also about the future of cinema. Lots of rich pickings, including Carolyn Giardina looking at Barco’s three-screen Escape and what lies beyond it.

Movie screens will continue to morph into ever-wider configurations as well, predicts The Fraunhofer Institute for Integrated Circuits, a German research firm. “There will be more panorama screens; it’s already happening in Germany,” says Siegfried Foessel, who oversees the company’s moving-picture technologies department, which is developing a 360-degree camera system that was used to shoot the final of the FIFA World Cup in Brazil. That footage will be shown in a special 360-degree OmniCam theater installation planned for the FIFA World Football Museum in Zurich. Meanwhile, startup Jaunt is developing a 360-degree camera for use in virtual reality.

High-tech interactivity also may play a role in the next generation of theaters. Avatron Development USA is creating special venues, comprised of high-tech attractions, that could begin arriving in cities across the country as early as 2017. They would include a theater where a 3D movie is projected onto a 360-degree dome-shaped screen and real-time facial replacement would be used to project audience members into the action.  LINK 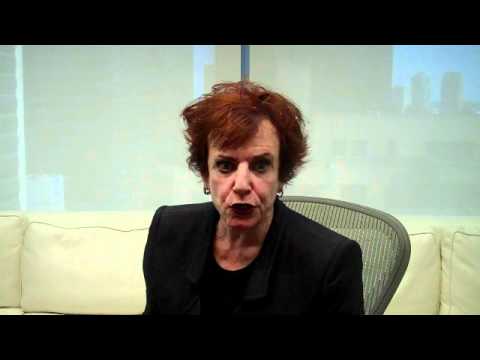 Elsewhere in the issue four ‘experts’ are asked where moviegoing will be ten years hence. The wonderfully out-there Faith Popcorn is the one we can resist quoting.

Movie theaters are dying. As consumers hide out in their at-home binge-cocoons, devouring entire seasons of HBO and Netflix programming, theater owners will partner with hotels to create binge retreats. These will be fab private dens you can rent for a few hours or days to binge-watch whatever you like. It’ll be all about decadence: Food will be catered and gourmet. Mixologists, masseuses and manicurists will be on-call. People will be unplugging from home and work, and plugging in to entertainment, fantasy and luxury.

In the future, fantasy adventure (our craving for exotic experiences) and technology will demolish the old-school movie screen. We’ll have completely immersive experiences. In a decade, Imax and even Oculus Rift experiences will seem as outdated as a Walkman.  LINK 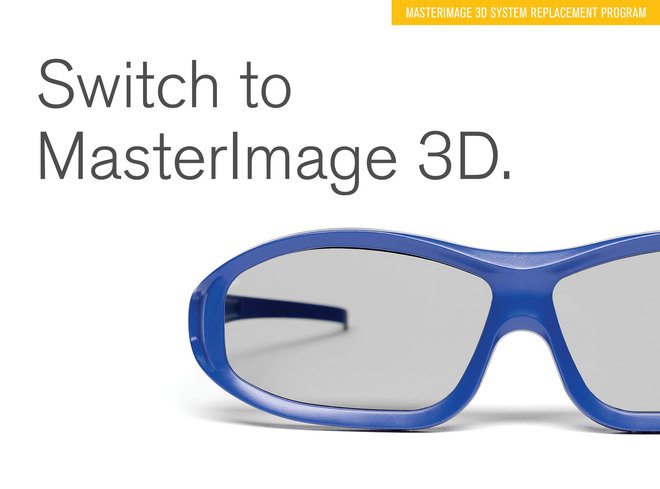 China (PRC) – As if RealD wasn’t having a bad enough week with Vue announcing that it was switching to Sony Digital Cinema 3D (see yesterday’s Daily), its Asian 3D nemesis MasterImage is now coming for them all legal patent guns blazing. 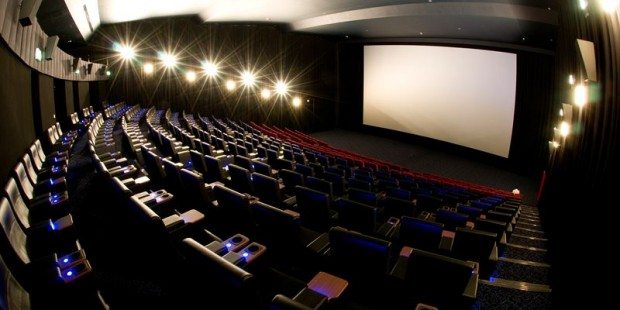 U.A.E. – Cinema advertising spend is up significantly in the largest cinema market in the Gulf.

The amount spent on advertising in cinemas across the UAE has surged 31 per cent during the first half of 2014 compared to the same period last year, according to figures quoted by cinema advertiser Motivate Val Morgan.

The rise in cinema ad spend was mainly driven by the increasing number of moviegoers in the country, the report by Statex, a part of global market research firm Ipsos, said.

Residents in the UAE go to cinemas on average 13 times a year on average, about four times higher than the global figure.  LINK 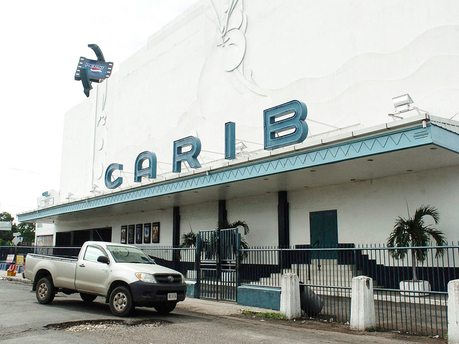 Jamaica – The operator of the Caribbean island’s largest cinema swung from profit to loss in the most recently concluded financial year.

Cinema operator Palace Amusement Company has made a loss of $12.2 million for the year ended June 30, 2014, a near 188 per cent fall-off from the previous year, amid falling sales and rising administrative expenses.

Administrative expenses spiked by seven per cent, while sales shrank by three per cent from $862 million to $834 million. The company saw a fall in revenue from box office receipts at all four of its cinema locations.  LINK 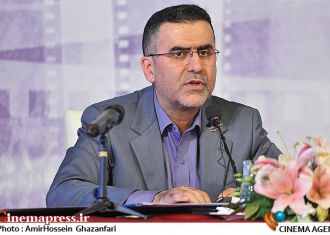 Iran – The exhibition market in Iran is on the mend after suffering under the previous cultural administration. There are 300 cinema and 80 more under construction in the country, that recently began offering free screenings to entice people back to the cinema.

“The vibrancy in the box office receipts shows that Iranian cinema is recovering,” Hojjatollah Ayyubi told the Persian service of IRNA on Friday.

He said that the Iranian theaters earned 280 billion rials (about $9 million) over the past five months. 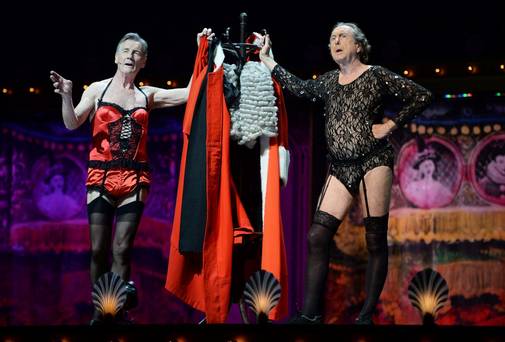 UK – Who said Germans don’t have a sense of humor? They and others helped a bunch of funny old British pensioners rake it in from cinemas. USD $1.1 million per Python (including the dead one) is not bad for a one-off cinema outing.

Picturehouse Entertainment’s live broadcast of the July 20 Monty Python Live (mostly) show has reached a worldwide box office figure of more than £4m ($6.6m) including encore showings, attracting an audience of more than 330,000 to 3,000 screens across 52 countries.

There were more than 100,000 admissions recorded in North America with Picturehouse Entertainment working with all the major cinema circuits and the network of independent and not-for-profit venues.

Matisse in a movie theatre? It’s happening this fall, as Cineplex’s new In the Gallery series provides a cinematic tour of some of the top international art exhibits from around the globe.

Event films included in this ground-breaking series include: David Bowie is, The Vatican Museums in 3D, Vikings from The British Museum, and Hermitage Revealed: 250 Years in the Making, which features the State Hermitage Museum in St. Petersburg, Russia. In The Gallery also includes the popular Exhibition: Great Art On Screen event films, and showcases artists such as Matisse, Vermeer, Rembrandt, van Gogh, and the Impressionists: Monet, Cezanne, Degas and Renoir.  LINK 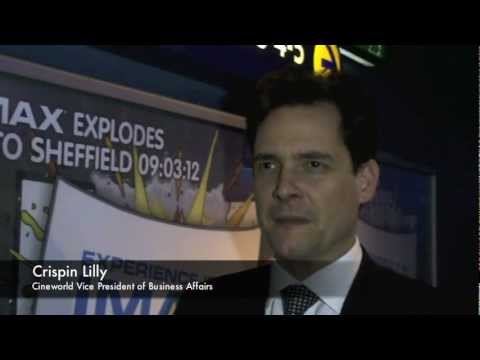 UK – Cineworld’s VP is going to be the new CEO of Everyman Cinemas. As you all know, I’m sure, art-house chain Everyman competes directly with Cineworld’s art-house division Picturehouse. Ouch!

Everyman Media Group has appointed Crispin Lilly as chief executive. He will take up the position before the end of the year.

He will take over from Andrew Myers who, as previously announced, is leaving the business.

Myers will continue in his position until Lilly’s arrival and the two will work together to ensure a smooth transition and an effective handover of duties. Lilly has been involved in cinema for 22 years having worked in various roles for MGM Cinemas, Virgin Cinemas, UGC Cinemas and, for the last ten years, with Cineworld Cinemas. LINK 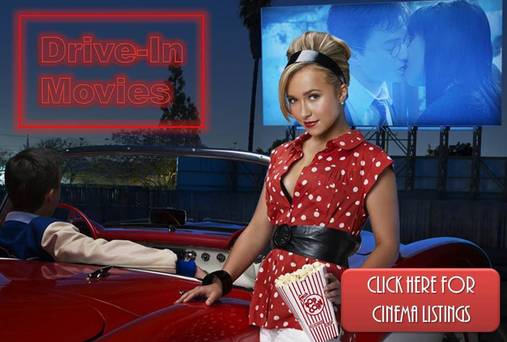 Just in time for winter movie nights, the Drive In Cinema will take over the Ferry Terminal in Dun Laoghaire, Dublin.

Between September 11th until December 8th, Underground Cinema will be organising some of the most iconic films in cinematic history, including Dirty Dancing, Elf, Avatar, The Goonies, and Jaws.  LINK 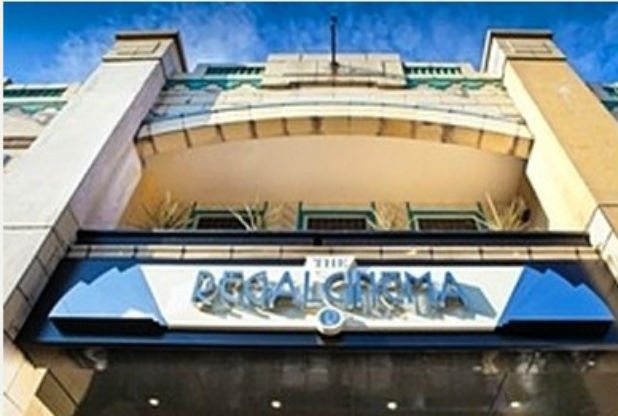 UK – The first rule of Secret Cinema Discussions is, ‘do not talk about secret cinema discussions!’

A cinema company has pulled out of talks over a potential move into Sleaford– blaming the town council for making its plans public.

But Tony Mundin, managing director of the Melton Mowbray-based firm, said he was disappointed with the council making his correspondence with them public at a meeting.  LINK 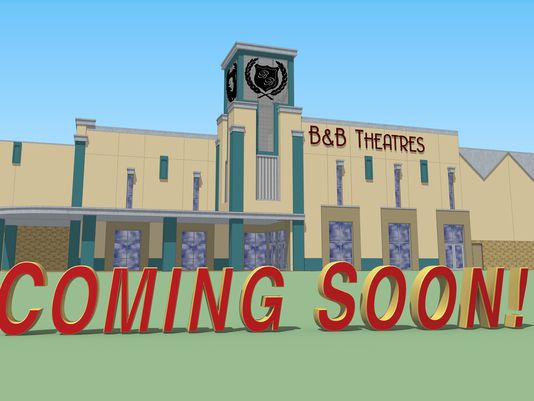 USA (MS) – Sounds like it will be a pretty luxurious multiplex.

What’s described as a nine-screen “luxury” movie theater is planned for McComb.

B&B Theatres said Tuesday it’s partnering with RBR Land Company LLC to build the theater as part of the McComb Crossing development, with the goal of opening the cinema in fall 2015.

Each of the nine screens will feature stadium-style seating and digital surround sound. Concessions will include burgers, hot dogs, chicken strips, french fries and onion rings along with more standard movie-house fare like popcorn, according to B&B. A bar will offer beer, wine and cocktails.  LINK 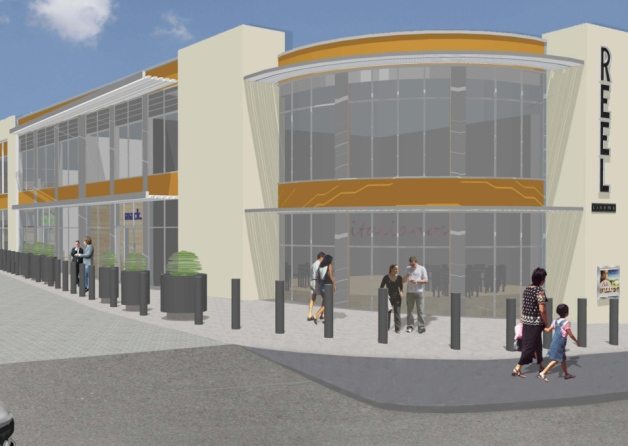 UK – The people of Grantham will soon have a chance to inspect the proposal for a six-screen multiplex.

People can view the details of the proposed development in the Newton Room of the Guildhall Arts Centre from 12pm to 6pm on Friday, September 19.

There will be a chance to leave feedback on the £5 million project on St Catherine’s Road that has been designed by NBDA architects that could include six screens and new office and retail units.  LINK 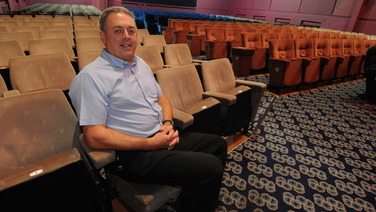 UK – Evidence that a well run independent cinema need not fear the opening of a multiplex nearby.

OWNERS of Barnsley’s independent cinema say they are not frightened by news that a nine screen multiplex is to be built at the Alhambra.

Manager and co-owner of the Parkway, Rob Younger is confident the price structure and ‘intimate quality service’ offered at the Parkway will continue to attract movie lovers of all ages.

And he says he is buoyed and delighted by the outpouring of support and praise for the Parkway which has flooded social media since last week’s announcement that a rival was heading to the town.  LINK 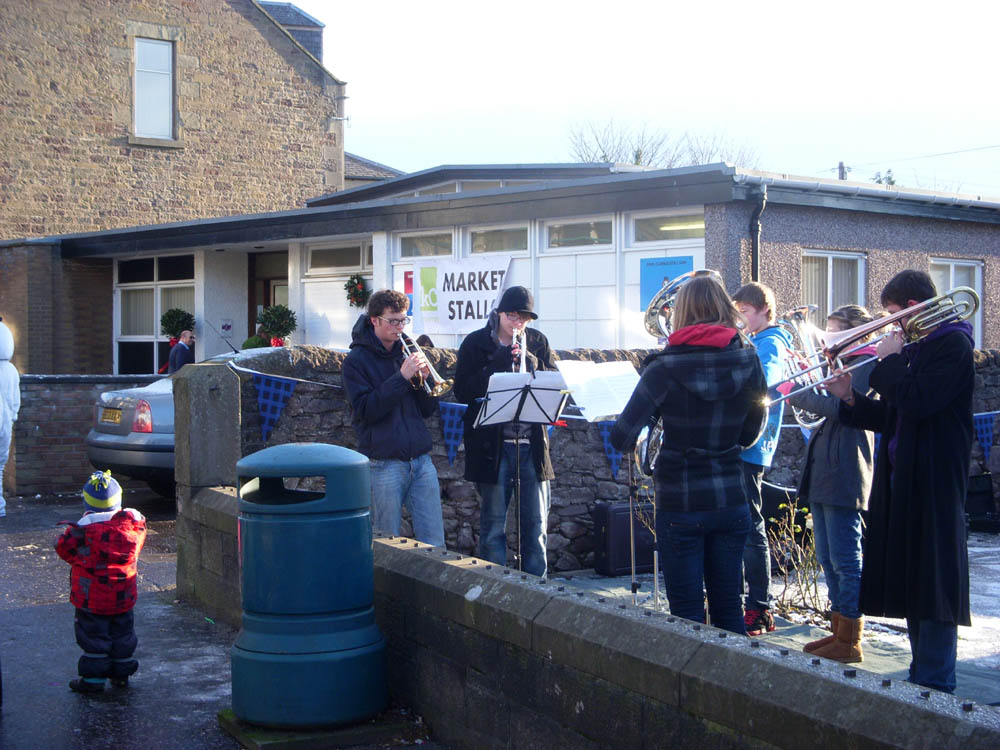 UK (Scotland) – Apparently it takes a village – to open a cinema. This one acknowledging our favourite swimming-pool-to-cinema conversions.

The big screen vision is the latest addition to proposals for the planned Kinloch Centre, but those driving the project say it will take hard work and not an insignificant amount of money to deliver a cinema at the heart of the community hub.

As Montrose also pursues plans for a cinema on the site of the town’s now disused former swimming pool, Kinloch Centre project chairman Peter Murphy said the ambition will only be achieved if the whole town is behind the effort.  LINK

A cute and interesting tapestry of infographics about Bollywood-by-the-numbers from Forbes. We only have room to show you a small section of it, so be sure to check out the whole thing. We particularly like the SRK appeal pie chart.

Amidst all the glamor and dazzle of Hollywood, people often forget about the world’s true movie capital – India. Firmly established in Mumbai, which was formerly known as Bombay (hence the Bollywood nickname), the Indian film industry is expected to grow to 138 billion Rupees by 2014 – that’s $2.28 billion.

The numbers are certainly impressive – in terms of the number of films produced each year, Bollywood is firmly on top of the pile with 1,602 in 2012 alone. The U.S. churned out 476 films that year while the Chinese managed 745. In the same year, Hollywood sold 1.36 billion tickets compared to Bollywood’s whopping 2.6 billion. Indian films can’t match Hollywood in box office revenue, however. U.S. films grossed nearly $10.8 billion in 2012 compared to India’s meager $1.6 billion. 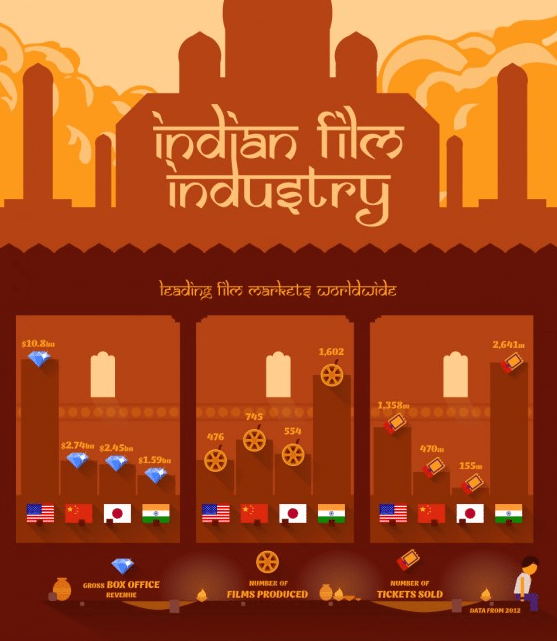