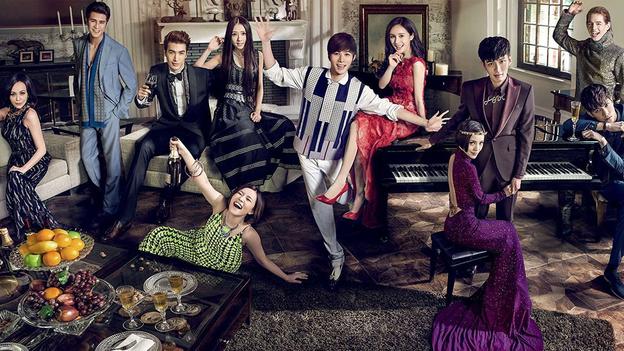 The China Film Association and other units launched the “2014 Chinese Film Art Report” and “2014 China Film Industry Report” earlier this week in Beijing.

The reports analyse cinema consumption patterns of domestic Chinese films and finds that they are primarily driven by females, Millennials and repeat viewing, with an astonishing per head spending of several hundred dollars per month at the multiplex. The reports also worries about the “shallow” themes of some of the most popular Chinese films.

With foreign (mainly Hollywood) films restricted in the Mainland market under the 20+14 quota, China’s cinema growth is taking place mainly on the back of domestic films. The government is keen to encourage this growth, which is why it is focusing research efforts on understanding cinema consumption patterns.

These two reports look at 2013 releases, which totalled 311 movies, of which 250 were domestic films(1) and 61 foreign films(2). Out of these 219 were categorized as genre films, such as comedy, romance, and action films, while 31 were categorized as “non-genre”.

It notes that out of 59 films that earned more than one billion yuan at the box office 32 were domestic, with domestic films accounting for 58% of overall takings, the highest number ever for Chinese cinemas.

The report and articles about it seize upon the youth focus and themes of the most successful films.

It is noteworthy that the themes about the current urban population of the urban youth film themes of love and youth, grow up to become a dark horse, and rescue. The higher box office films “To Youth”, “Tiny Times”, “Chinese Partner,” “Break the Contract”, “That Was Stolen Five Years”, etc., all have a youthful theme. But the report notes that, while a good number of youth films, many of the movie lacks intrinsic emotional power and creative artistic qualities, and themes of these films focus on youth and substance, youth and love, youth and nostalgia, but lack a richer ambiguity.

The article goes on to lambast the “speculative mentality prevailing” in many youth films with the highest market share, saying “the youth theme of this bonanza is shallow excessive consumption.” The sentiment is perhaps understandable as even western media has latched onto what makes films such as “Tiny Times 3” so popular.

Here is for example what the BBC had to say about it:

Tiny Times couldn’t be further from Mao’s ascetic communism: it is a wholesale celebration of conspicuous consumption and materialism that has been described as a cross between Sex and the City and The Devil Wears Prada.

The series follows four attractive, fashion-obsessed young women in Shanghai: Lily, Ruby, Lin and Nan Xiang. It chronicles their lives and romances. The actresses look perfect – nicely groomed and slim. There are constant references to sports cars and expensive brands such as Prada and Gucci. The characters are often in opulent surroundings as they enter into relationships with handsome, well-dressed men.

Meanwhile The Atlantic thunders ‘China’s ‘Sex and the City’ Film Is a Great Leap Backward for Women‘, noting that “The hit movie portrays Shanghaiese women as shallow, vapid, and beholden to bad men. So much for gender equality.”

The four characters’ professional aspirations amount to serving men with competence. The film is a Chinese version of “chick flick” minus the emotional engagement and relationship-based social realism that typically are associated with the Hollywood genre. The only enduring relationship in Tiny Times is the chicks’ relationship with material goods. The hyper-materialist life portrayed carries little plot but serves as a setting for consumption, and is more akin to MTV or reality TV than real drama. With its scandalously cartoonish characters, the film would have worked better as a satirical comedy, except that the director is too sincere in his celebration of material abundance to display any sense of irony.

Perhaps no wonder that Chinese authorities are even less impressed with a film that is about to spawn its third sequel in 2015.

Putting aside the editorialising about the tastes (or lack thereof) amongst Chinese cinemagoers, the reports reveal some fascinating statistics when it comes to the composition of the masses that make these films such hits. Perhaps not surprisingly they reflect what is presented on the screen. 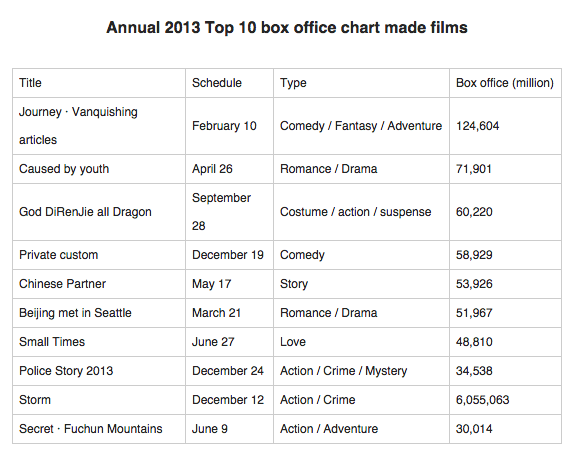 According to the article by China News Network the report found that the sample audience is overwhelmingly female and mainly the Millennials of Generations 80, 90 and 00, i.e. those born in the 1980s, 90s and 00s.

The astonishing growth rate of cinemas in China is thus underpinned by women born in the 1990s, either in university or early in their career, spending several hundred dollars per month in the multiplex.

The report also goes on to examine what influences the choices of films that these Gen 90 women chose to watch, noting that “in viewing habits, entertainment and social viewing is the most important purpose; although the impact of public opinion [plays a role], but “their decision” is still the most important basis for moviegoing [choices].” It is clear that it is impossible to spend the equivalent of several hundred dollars per month at the cinema only watching different films, so repeat viewing plays a key role.

The report also looks at what’s become of older cinema patrons and laments that there is not enough daytime occupancy in cinemas, urging measure to stimulate both.

At the same time, the data show the presence of almost all national cinemas open day sessions reflect a serious shortage of low attendance phenomenon. The report analyzes that China has gradually entered the aging society, culture attaches great importance to older audiences, the development group to attract middle-aged viewing of the movie “daytime gear”, might be able to inspire enthusiasm in viewing by the elderly.

In this regard China is no different from more mature exhibition markets in Europe and North America where there is an over-reliance on Friday-Saturday attendance, but without the incentives for weekday viewing (discounts, special schemes, event cinema programming) that are widespread in the west.

Overall it paints a picture of a rapidly changing audience landscape but it is clear that it not just in the US that cinemas should pay greater attention to female audiences.

(1) ‘Chinese’ films include Mainland China and other countries or regional co-productions, with Hong Kong and Taiwan thus included in the mainland release table.

(2) The fact that there were 61 foreign films, i.e. 27 more than the 34 allowed under the quota, is because some foreign films (such as “Brick Mansion”) were imported on a ‘flat fee’ basis and thus exempt from the quota that only applies to revenue share films.