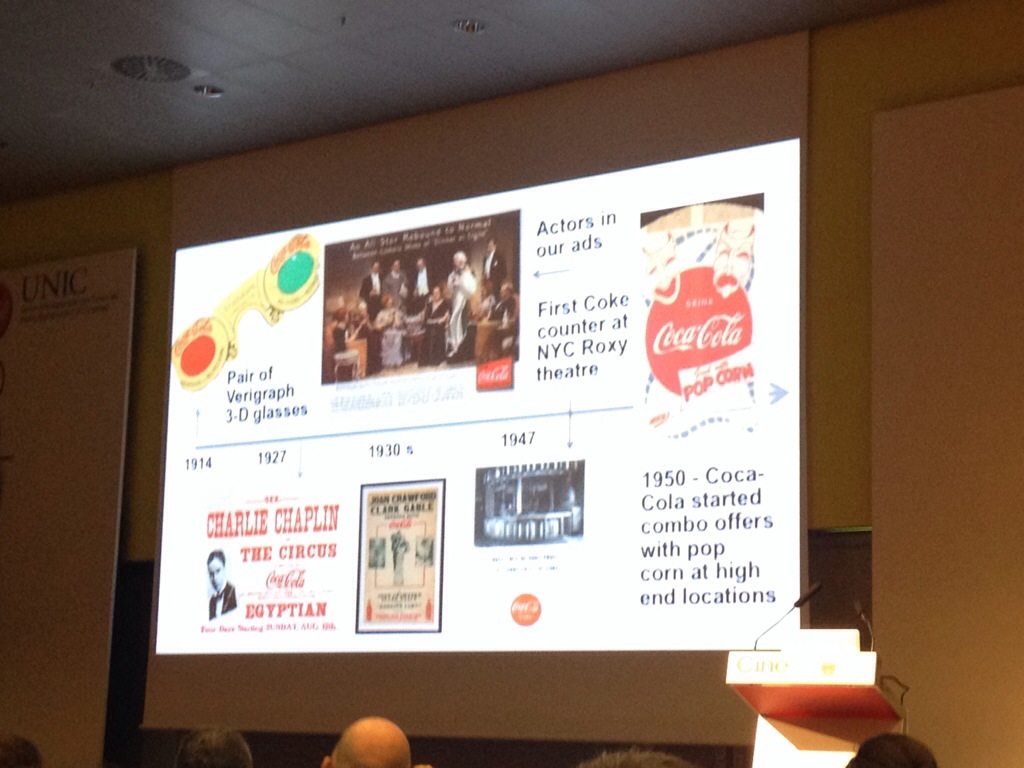 The single most important food and beverage (F & B) company for the exhibition industry hosts its seminar at CineEurope 2014 on how to reach and engage with consumers. I have seen their talks at Cannes Lions (where I was yesterday – hence why no first-day CineEurope coverage) and they really do make you believe that there is so much more to their business than just selling brown sugar water. Having one of the world’s most iconic brands obviously helps and the “Share a Coke” name-on-a-bottle campaign is pure marketing genius.

Corinne Thibaut is upfront about the challenge of a declining youth cinema attendance. “We need a new marketing approach,” she says, to engage a new generation, and “to capture the imagination of moviegoers.” She then hands over the floor.

Javier Sanchez Lamelas, European Marketing Director of the Coca-Cola Company takes the floor and announces the theme of his talk: “falling in love with cinema.” Rather than talk behind the lectern, he walks out amongst the audience. He shows amazing exams of how Coke promotions date back to anaglyph 3D glasses in 1914! Shows the “Skyfall” 007 Countdown challenge video which was viewed 10 million times on YouTube. The audience here at CineEurope loves it. Mainly because it is good.

“Marketing is not that obvious,” he goes on and talks about our three brains: the instinctive, the emotional and the rational brain. Apparently people who didn’t cry at the ending of “Love, Actually” don’t have an emotional brain. (That would include yours truly). Quotes Neurologist Donald Calne: “the essential difference between emotions and reason is that emotions lead to action while reason leads to conclusions.”

Next Lamelas explains that brands are about values while products are about needs. Points out that you don’t need to spend more than EUR €20 to get a watch that tells the time. Anything above that you spent because of emotions. Laboutin shoes cost EUR €600 and are uncomfortable. People buy Coke or cinema tickets because of feelings and emotions. “We make people fall in love with things for emotions. We fall in love with brands the exact same way we do with people.” If you are seen with his brand you feel taller, smarter and sexier, but if they have the competitors drink then they are losers, shorter and have dandruff. (He does the tongue-in-cheek very well).

Belief #1 – Talk to the Right People. The negative predictive value shows that 6.80 million Europeans will leave earth this year (i.e. die). You have to make young people fall in love with your brand faster than the old customers die off. [At this stage everyone in the audience should be taking notes. But they are not. Hope they are still taking this onboard.] Lamelas talks about how Levi’s forgot to rejuvenate their brand and are now seen as “dad jeans”. Compares this to what Tom Ford did to rejuvenate Gucci by putting leather pants on Kate Moss.

Belief #2 – We sell “values”. Values shape emotions – Emotions drive behaviour. “Coke is about brand, not product, which we stand for.” Shows the ‘Share a Coke’ Spanish campaign. Make people love your brand. “Stories are the brain’s user manuals. You need to understand the technique of storytelling. You open the door for people to fall in love with your brand.”

Belief #3 – Lamelas talks about the art of telling a story and the three act structure. All a bit Syd Field. Asks if people have seen “As Good As It Gets”. Few put up their hands. “How is it possible that I, selling a drink, know more about films,” than you exhibitors, he asks. Shows the ‘you make me want to be a better man’ clip from the film from movieclips.com

Belief #4 – With a bit of humour. More of McCann’s campaigns for Coke. (Either I’m sitting too close to the speaker or this is WAY over 85 dB).

Belief #5 – Making sure we look great.

Belief #6 – In a consistent way… “Nothing destroys love faster than random behaviour”. Uses Pepsi’s logo changes as a counter example [but no mention of New Coke].

Belief #7 – Anticipate changes. In the future the viewer will have… Full control all choices. “You are factories of feelings and emotions.” Lamelas urges exhibitors to be agents of change. Talks about moving from Creative Communism to Creative Darwinism. You can’t just program and expect people to keep showing up. “You need to give people a reason to pay a premium prices for a small thing.” Shows Milan-Inter Coke sharing machines advert. [I’m having real Cannes Lions déjà vu here.]

Belief #8 – Innovating. Now he talks about practical suggestions. Coke and popcorn combo concept. Concept: “Imagine all the things you can do with a free hand.” Audience laughs. I’m sure they are thinking of other things than holding a movie ticket with their free hand.

League of Legends showing in cinemas example (as we’ve written about here in CJ before). Now Lamelas wraps it up. Thank you and see you at retail seminar tomorrow says Thibaut.

This might have been the first session here in Barcelona that I attended but it might already be the most important one of the entire CineEurope show. I hope that the exhibitors in the audience took onboard the message. I hope, but I’m not so certain. Also makes me realize what I sacrifice by not attending the rest of Cannes Lions this week, but sadly I can’t be in two places at once. 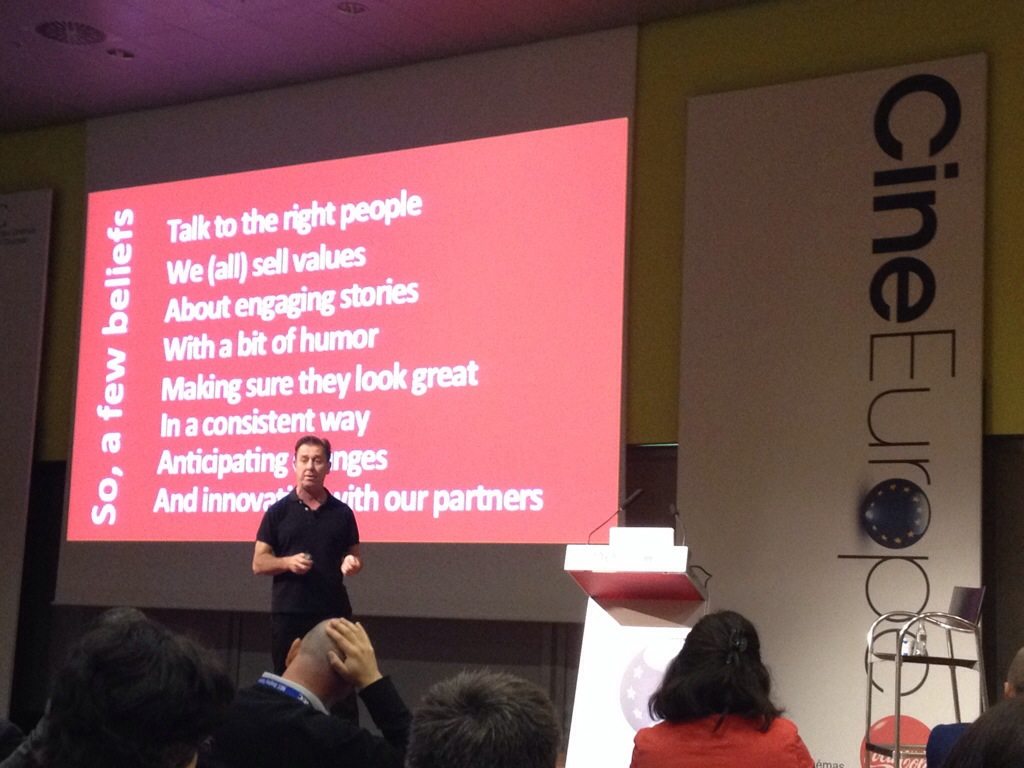