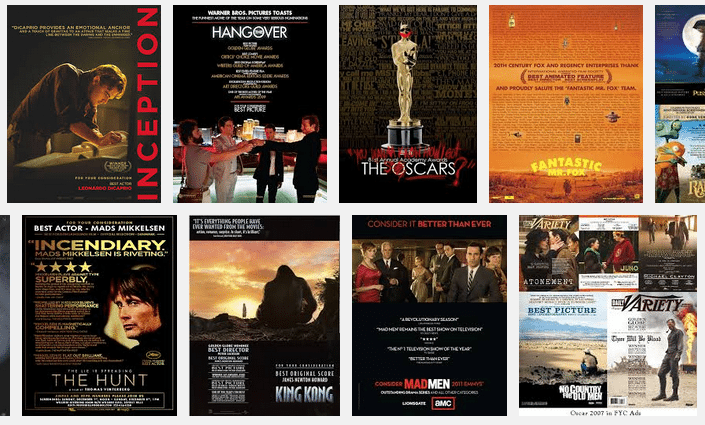 A: They are all largely seasonal industries.

Ski resorts don’t have much business in the snow-free summer months, just as there only seems to be demand for turkeys and Christmas trees between Thanksgiving and New Years.  Similarly, The Hollywood Reporter and Variety  find their fortunes disproportionately tied to the awards season currently underway. Although it is true that the likes of retailers and book publishers also depend on the end-of-year season to pull them from red to black, it is worth asking whether the ground under the Hollywood trades has shifted so much that they can now be considered a truly seasonal industry and what implications this has for the publishers, journalists and the film industry at large.

With the Hollywood Foreign Press Association (HFPA) recently asking studios and distributors not to call award nominees ‘winners’, it is an open secret that the true ‘winners’ in the run-up to the Academy, Golden Globe, BAFTA, SAG, etc. awards are the trade publications carrying the ‘For Your Consideration’ (FYC) adverts along with the public congratulations for nominees and winners.  The main beneficiaries of the distributors’ largess are Variety, Hollywood Reporter and Screen International, with on-line publications like The Wrap and Deadline Hollywood capturing a small percentage.  Let’s also not forget all those billboards that spring up across Los Angeles at the end of the year.  Awards season advertising has proven so lucrative that mainstream media such as the Los Angeles Times and even the New York Times have gotten into the game with special sections focused on awards contenders.  It is difficult to estimate the ‘bump’ that the awards season brings in the advertising revenue, but puzzling together different sources indicates that it lies north of $100m for the past year. It’s enough to make Vogue’s fabled September issue seem like a small fashion supplement.

The trades don’t simply sit back and order more paper for thicker issues, they have to provide the seasonal content tree that the glittering FYC baubles will be hung from in the form of round-tables, profiles and in-depth pieces on the people behind and in front of the camera that make the award contending films. There are also elaborate special web sections devoted to the many awards (leading up to the One Award That Truly Matters, i.e. the Oscar) for both Hollywood Reporter, Variety and Screen – as well as the LA Times and NY Times. A visit to these sub-sections will reveal a treasure trove of articles, opinion pieces, newsletters, special sections, video interviews, predictions and punditry. The one thing they lack is the raison d’etre for why they were written in the first place. Not the Oscars, but the adverts.

For all the great strides that programmatics have made in serving up the right advert for the right audience, even they can’t tell if the person browsing the website is a voting member of AMPAS/BAFTA/SAG/etc. All they can do is filter based on regions (no point serving up banner ads to people outside US, with the possible exception of the UK) and cookies, but these are blunt tools when trying to home in on the 6,000 voting AMPAS members, the 6,500 BAFTA members, the 105,000 voting SAG-AFTRA members (of which just 2,100 are selected to nominate the short list candidates) or the very exclusive HFPA of less than 100 voting members. There is really only one way of targeting them, which is with printed editions. Hence why Screen is distributed for free to every BAFTA member come awards season; why a special PDF version of THR is available to read on the iPad during the Christmas holiday; why you almost expect someone to be standing and handing out free issues of Variety as you exit the Trader Joe’s in West Hollywood. The only reason carpet bombings of ‘Award Contender Guides’ over Beverly Hills don’t take place throughout December is probably because of Federal Aviation Authority restrictions. I jest, but only just.

After getting voting members into cinemas to see the films (lured with offers of free tickets or special Q&A sessions with the cast and crew) and sending out DVD or on-line screener (over 100,000 DVDs in the case of ‘Dallas Buyers Club’ for SAG-AFTRA), taking out print adverts for a film is the most tested and tried way of pushing for recognition. Some talent even have it in their film contract that the distributor is obliged to buy a certain amount of FYC press coverage in relation to their film. At a time when print is in decline from the assault of smartphones, tablets and e-readers, Canadian loggers must be ordering extra chain saws in October for all the trees required to make the pulp that makes the paper that makes the advert “For Your Consideration ‘Of Horses and Men’ (Hross í oss) directed by Benedikt Erlingsson” Iceland’s submission for Best Foreign Language Film (FLF), which didn’t make the shortlist. The amounts spent on advertising tend to dwarf other costs.

In the New York Times article (‘Bring Your Film Here, The Run – Foreign Film Makers and the Oscar Race‘), the example of just one Foreign Language Film (Peru’s submission) are illuminating:

When “El Limpiador” was submitted as Peru’s candidate for the foreign language film Oscar, it embarked on a campaign to win votes from Academy members. As it turned out, “El Limpiador” didn’t make the shortlist announced this month. But until then, the filmmakers used the $32,000 in their budget on a number of outreach efforts. Here’s a look at some of the expenditures.

So the total advertising cost of $14,500 was almost half of the total $32,000 budget. That was for one of the smallest FLF submissions. According to the same New York Times article, $120,000 was spent on the submission from Equador. Big nations like Germany, (Francophone) Canada and China can spend even more to bolster the national prestige of just having made the shortlist. Much more is spent by FLFs that have a distribution deal with one of the Hollywood studios’ specialty distribution arms, such as Sony PRI handling distribution of Russia’s “Stalingrad”. A comparable amount is spent on smaller and independent English-language films, but the biggest money is of course for the Hollywood studios prestige releases ranging from Warner Bros’ “Gravity” to Disney’s “Saving Mr Banks”. Put all of these together and you realize just what a bonanza it is for THR et al.

This year could be the most lucrative yet, with nomination and voting season extended, due to the Oscars moving until after the Sochi Winter Olympics. Last year Steve Pond was quoted estimating that “the makers of Lincoln and Argo have each spent at least $10-million on “for your consideration” notices and other advertising.” Even after AMPAS’s 2011 crackdown on glitzy parties, there is still no restriction on the amount of money spent on advertising and promotion. Patrick Goldstein in his LA Times blog was forced to pose the question, “The Oscar race: Is it time for a luxury tax on studio spending?”

But the biggest hangover the day after the Oscars are handed out isn’t for the few lucky winners, but the Hollywood trades that with the exception of the few post-ceremony obligatory congratulatory adverts for the winners won’t see a similar bonanza. Sure, there are the film festivals (Sundance, Berlin, Cannes and Toronto, recently joined by emerging market events like Busan and Dubai) where the special issues keep the loggers pulping, but the margins on these are thinner because they are only around a week or two, not to mention the additional resources required for writing, printing and distributing special editions in a foreign location. Some have even done away with printing altogether and offer special issues only as a smartphone and tablet download.

There just isn’t the historic business to sustain the traditional Hollywood trade business between awards.

As far back as 2010 the New York Times observed that: “The Hollywood Reporter has been dying a slow death for a decade, bleeding from layoffs, vanishing advertisers and diminished relevance in a news cycle now dominated by cutthroat entertainment blogs.” [Surely they don’t mean us? Ed.] The LA times observed that “Variety made about $6 million last year, a far cry from the more than $30 million it made in 2006.” Both THR and Variety went through ownership changes that saw them move from traditional publishing conglomerates to more tech-savvy entrepreneurs. The situation has stabilized since, with THR ending the daily print edition, focusing more on the web and launching a life-style oriented large format glossy weekly magazine that emulates Vanity Fair. LA Weekly went so far this year as to claim that, “You can divide the timeline of L.A.’s venerable industry rag The Hollywood Reporter into two distinct epochs: pre– and post–Janice Min,” the Us Weekly alumnus who took over the helm of THR in 2010. June this year saw the promotion and hire of several key staffers on the back of strong web traffic. Being part of the Guggenheim Digital Media group (formerly Prometheus Global Media) anchors THR to stablemates Billboard, Adweek, The Film Expo Group and the CLIO Awards, with further future focus on integration with web and trade events. Variety and Screen have been playing catchup with THR, with Variety ending its daily print edition this year, as well as killing its pay-wall.

But all is far from well and there could be worse to come. Consider what has happened this year:

The Hollywood Reporter has been sued by one of its own.

THR.com assistant editor David Simpson filed a class action lawsuit on Friday against the publication’s parent company Prometheus Global Media, accusing it of “willfully misclassifying their freelancers as independent contractors and denying them the wage and hour rights and protections of employees under the California Labor Code and applicable Wage Order.”

According to the suit, though Simpson, “one of numerous freelancers at THR,” performs duties for the outlet that are “indistinguishable” from full-time employees, he does not receive the same benefits or protections.

Just like stores hire extra sales personnel in the run-up to Christmas, the Hollywood trade publications need to rely more on freelancers during the awards season. But (allegedly!) relying on freelancers year-round is not how a healthy business runs. While this issue may have been overshadowed by the larger Hollywood studio intern lawsuits this summer, it is one that is unlikely to go away. All industries need healthy trade publications that track, monitor as well as provide news and analysis coverage, whether it is rare earth minerals or IHS Jane’s Defense Weekly. The difference is that they have not tied their fortunes to a 13.5 inch tall man in gold holding a sword who puts in an appearance just once a year.