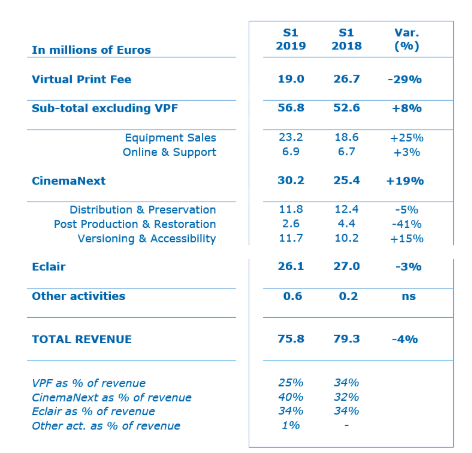 Strong commercial traction during the first half of 2019

Revenue for Ymagis Group was down by 4% for the first half of 2019 under the effect of the scheduled reduction in VPF (-29% at €19m) and the narrowed “post-production and restoration” related activities on the French market.

This decline is however largely offset by not only the solid growth of the CinemaNext business unit (+19% at €30.2m) but also Eclair’s Versioning & Accessibility activities (+15% at €11.7m).

CinemaNext sales increased by 19% during the first half-year to €30.2m. After a strong increase in Q1, mainly linked to the construction of new cinemas, the second quarter indicates a certain stability, considering it does not include the expected revenue from the first equipment renewal contracts (representing 300 screens) signed during the period with cinema exhibitors such as the Austrian Cineplexx, the French Megarama and the Irish Omniplex. The impact of these new contracts on revenue will be visible from the second half-year onwards and will continue over the coming two years.

The activities of the Eclair BU continued the trend begun in first quarter, with a sharp drop in “creative services” activities (Post-Production and Restoration) linked to the placement of the French subsidiary Eclair Cinema SAS in receivership. This was largely offset by the dynamism of the Versioning & Accessibility activities (+15% at €11.7m).

The new activities recorded revenue of €0.6m during the first half-year, after €0.4m during Q1 (figure adjusted by – €0.2m following the reclassification of a VR equipment sale by CinemaNext during Q1). The growth of VR activities should pick up speed with the opening of new centres such as Marseille and Athens in the coming months. Considering the ongoing negotiation phase with the Group’s creditors, this trend should be lower than expected due to the temporary slowdown on investments related to Illucity.

Ongoing negotiations regarding the debt

Business perspectives, strengthened with the confirmation of a new growth phase for CinemaNext linked to the start of the equipment renewal cycle, remain subject to the ongoing debt renegotiation with Ymagis Group’s creditors.